The Logic Extremists were a small band of Vulcans first mentioned in the Star Trek: Discovery episode Lethe.

Considered renegades and extremists by the majority of Vulcan society, the Logic Extremists saw humans and other non-Vulcans as inferior to them. Their goal was to have Vulcan leave the Federation, which their members termed a failed experiment, so that they could bring about their vision of Vulcan society.

The Logic Extremists once bombed a Vulcan Learning Center where Michael Burnham was studying in order to kill her. Their bombing injured or killing many of the individuals at the center. Burnham herself nearly died, but was saved when her foster father Sarek used a mind meld to revive her. This left a permanent mental link between the two individuals that stretched across space.

Deeply worried that the Logic Extremists would next target her family, Burnham ran away from home but thanks to Spock's assistance Sarek was able to track down Burnham before she got very far.

In late 2256 a Logic Extremist agent named V'latak infiltrated Sarek's staff. Piloting Sarek's ship to a supposed peace conference with the Klingons, V'latak performed a suicide bombing in an attempt to assassinate Sarek. While Sarek was seriously injured in the attack, he was ultimately rescued by Michael Burnham.

Another agent named Patar had managed to infiltrate Starfleet and rose to the rank of Admiral by 2257. Using her rank of Admiral, Patar used Section 31 to further the goals of the logic extremists before Control killed her and several other Admirals leading Section 31 at the time. 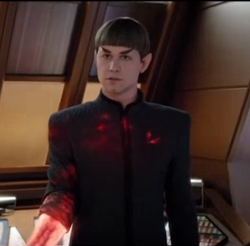 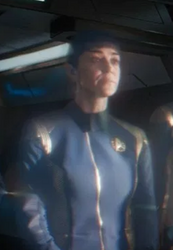 Admiral Patar
Add a photo to this gallery
Retrieved from "https://villains.fandom.com/wiki/Logic_Extremists?oldid=3931572"
Community content is available under CC-BY-SA unless otherwise noted.