Keeping the house in order.
Dominating.
Protecting her loved ones.

Provide for her family.

Find ways to get Peter to have education and get better (all ongoing).

Lois Patrice Pewterschmidt-Griffin (born February 18, 1956) is a major character in the FOX animated TV series Family Guy. Originally she was a protagonist, but as she became darker, despite being one of the protagonists, she does have several episodes where she has an antagonistic role.

She is voiced by Alex Borstein, who is well-known for her portrayal of Ms. Bonnie Swann on the hit satirical comedy show MADtv, as well as Queen Machina in Power Rangers Zeo, and Negative Wonder Woman in Robot Chicken.

Born Lois Pewterschmidt, is the daughter of billionaires Carter Pewterschmidt and Barbara Pewterschmidt, Lois grew up in a very wealthy home with her sister, Carol. She also has a long-lost older brother, Patrick, who was sent to an asylum after he became a serial killer.

She met Peter when he was hired as a towel boy by his aunt. His rich dad can't accept Peter and makes rude comments every chance he gets. Peter seems to want to do his absolute best not to be a hindrance. She also alludes to having studied at Kent State University.

Lois is currently full time as a mom and spends most of the work day taking care of Stewie, cleaning the house and cooking for her family. However, she is also a piano teacher on the side to supplement the family income. She is currently 42 years old. She is reportedly two years younger than Peter.

Lois is a middle-aged Caucasian woman with short orange bell-shaped hair. She is commonly seen dressed in a teal green button-up woman's blouse, tan slacks, and magenta slip on shoes with red lipstick.

Initially, Lois is depicted as a stereotypical housewife and doting mother, which combined with her natural beauty and sexiness has made her the ideal woman. She has shown to be tolerable of Peter's random shenanigans, putting himself and others in danger whether it's from his unhealthy drinking or reckless idiotic acts, while doing her best to be a living mother and wife.

However, as the series progressed, Lois developed a darker personality. Among them being her apparent taste for Sadomasochism (S&M), dressing as a dominatrix in "Let's Go to the Hop", putting out a lit cigarette on her arm in "Breaking Out is Hard to Do", asking Peter to put his finger in a bullet hole and twist it when he accidentally shot her in "Barely Legal" and directing Peter to kick her breasts in "Brian's Got a Brand New Bag". Several times, Lois raped Peter, yet she sees nothing wrong with this as she believes men can't be forced to have sex.

Lois has also gone from a loving mother to a woman who once admitted that she didn't want children in the first place during one several occasions; in "A Fish out of Water" when her and Meg go on Spring Break, during the awkward car-ride she tells Meg that she took birth control but taking antibiotics made it not work, evidently causing Meg's birth. In "Peter's Daughter" she instructs Meg on how to have a miscarriage". Chris was also said to be the result of a broken condom in "Emission Impossible", with the resulting lawsuit paying for the Griffin's house.

She has also started showing almost no compassion toward Meg, Chris, and sometimes Stewie on a number of rare occasions whether either of them gets into serious situations. In almost any episode, Meg is the prime target of various negative comments from Lois, which ranges from an assortment of criticisms about her appearance or personality, sometimes displaying superiority over Meg using her previous relationships, accomplishments, or popularity, often breaking down her daughter's self-esteem more and more with every episode. Lois was even willing to consent to having Principal Shepard create a fake application for Meg in "Meg Goes to College" so Meg would be accepted into a college and that way they would be rid of her.

In several situations where her children shows any kind of imperfection that would go against her desires or question her adeptness as a parent, she'd once attempted to come up with an immediate reason to tell people if Chris committed suicide about mental illness in an attempt to gain sympathy; in "Papa Has A Rollin' Son", she asked Doctor Hartman whether or not Stewie would die younger than fourteen after he informed her that he wouldn't grow any taller; in a possible future where Stewie and Brian in "Roads to Vegas", she milked the fact that Stewie had died receiving different gifts and foods from her friends and parents.

Lois is also willing to resort to blackmail, such as in "Halloween on Spooner Street", where although she got back Stewie's Halloween candy another boy had stolen, Lois threatened the boy's mother by demanding she also pay her some money as well, or against Quagmire in "Quagmire and Meg", where though she and Peter saved Meg from having sex with Quagmire, she also blackmailed Quagmire into letting her and Peter use his cabin at least once a month. 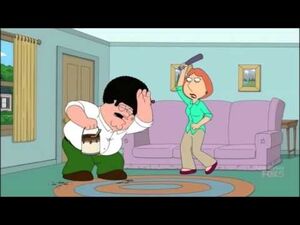 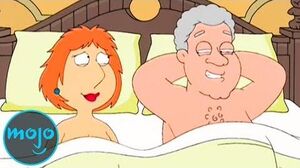