Use the Defoliator against the Galactic Republic.

Terrorist
Lok Durd was a minor antagonist from Star Wars: The Clone Wars, serving as the main antagonist of Season 1 - Episode 14. He was a Neimoidian general who was a member of the CIS during the Clone Wars and developed the Defoliator.

He was voiced by George Takei, who also played Hikaru Sulu in Star Trek, Warlord Shank in Space Cases, Mr. Fixx in Batman Beyond, Emperor Yoshiro in Command & Conquer: Red Alert 3, Mr. Moto in Archer and Ricardio in Adventure Time.

During the war, Durd created an experimental defoliator—an artillery radiation weapon that could theoretically wipe out any organic matter while leaving machinery unharmed. Durd chose to test his weapon on the isolated world of Maridun, as it was home to a colony of pacifist Lurmen. After landing on the planet and setting up a base camp, Durd initially tested the defoliator on a pair of battle droids. Following the experiment's success, he moved to attack the Lurmen in order to impress Confederate Head of State Count Dooku. However, Durd was interrupted by the Jedi Anakin Skywalker, Ahsoka Tano, and Aayla Secura, who had crash-landed on Maridun prior to Durd's arrival. Using shield generators that they had captured from Durd's base camp, the Jedi were able to block the defoliator ray targeted at the colony with a deflector shield. Following a brief battle, Durd and his assistant, Pune Zignat, was captured by the Jedi and subsequently taken into Republic custody.

Lok Durd later appears in Clone War Gambit, where he kidnaps a scientist and attempts to force her to design a bio-weapon.

Lok Durd was a flamboyant, bossy, ruthless, and merciless individual, and was often disliked by his peers for this. He hoped to be promoted to a higher and more substantial rank within the Separatist Droid Army, which was one of the reasons he developed his defoliator weapon. A self-centered Neimoidian, Durd dreamed that with his development of the device, Republic planets would submit to the Confederacy at the mere mention of his name. With a larger salary, he also hoped to spoil his children. Durd constantly pontificated and bragged to the battle droids under his command on what the success of his defoliator would bring him. In battle, the general preferred to deploy his troops in large head-on rushes. However, he was cowardly, as seen when he chose to escape from the battle after Skywalker had destroyed his defoliator cannon.

A Speciesist being, Durd believed that Neimoidians were the noblest individuals in the galaxy, He also hated human thinking they stink and consider them bigots. He chafed under the need to report to the higher-ranking Human Count Dooku; given all that the Neimoidians had done for the Separatist cause, Durd was offended that Dooku was the public leader of the Confederacy, though underneath he also very fearful of the count. After arriving on Maridun and selecting the pacifist Lurmen as the defoliator's organic test subjects, Durd lied to Chieftain Kaa, stating that the village was now under the "protection" of the Separatist Alliance, when in fact the colony would be destroyed by his weapon. The Lurmen would be obliterated before anyone else would know of the Neimoidian's massacre, and Durd's "little white lie" would die with them as well.

Durd was very overweight for a Neimoidian, eating lots of fatty pylat eggs and deep-fried chewgrubs. As a result of his corpulence, he was a very slow runner. Durd wore a Neimoidian mitre with the Separatist insignia set upon it, as well as a tunic of Ramordian silk adorned with expensive girdles and rank epaulets. He was able to speak Galactic Basic Standard.

Clone War Gambit shows that he doesn’t care at all about the people he hurts to get what he wants, threatening to murder Ban’tera‘s friends and family if she Doesn’t design a virus for him. 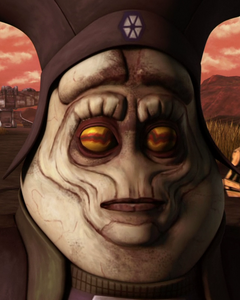