Take over the universe (both failed).

Lokar is a dark entity who appears as an ethereal and mysterious demonic head and an antagonist from Mighty Morphin Power Rangers.

He was portrayed by Masahiko Urano and voiced by the late Robert Axelrod, who was known for the voice of Lord Zedd.

This entity Lokar, who is the ruling intergalactic wizard from his hoary native alien realm known as the Talos Dimension, was summoned by the space witch Rita Repulsa to change Mutitius to his more powerful form and then assisted in sending the Power Rangers to the Island of Illusions. After they destroyed Mutitus with the Ultrazord, the Rangers then attempted to take down Lokar. However, he teleported just as the blast hit.

He was summoned again (now bearing heavy scars from the Ultrazord's attack) after the Power Rangers destroyed Cyclopsis and recreated the War Zord.

Lokar then started aiding Cyclopsis in the battle with the Rangers, but they were both hit with the Ultrazord's attack.

When summoned by Rita, he appeared as a pale, human-like floating demonic head with spiky quill-like hair along with a pair of thin horns. Following his first defeat at hands of Mighty Morphin Rangers' Ultrazord, he bears scars all over his face. As with his counterpart Dai Satan, Lokar also possesses a humanoid form which, unlike the former's muscular and monstrous physique, has rather leander and slender stature akin to storybook wizard complete with a robe as shown in Soul of the Dragon.

Lokar is an enigmatic yet malevolent and proud being that terrify even his own allies. Baboo once mentioned how he nearly wiped them all out the last time Rita summoned him, mostly due to his great power.

Lokar is able to fly, fire energy blasts, transport beings, and unleash a powerful gust like breath attack which can also revive, or mutate/empower others. He also noted to be so powerful that Rita refers him as "heavy artillery". 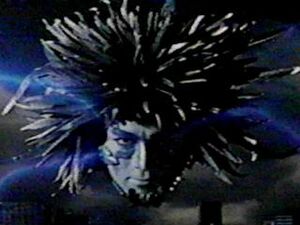 Lokar
Add a photo to this gallery

Retrieved from "https://villains.fandom.com/wiki/Lokar_(Power_Rangers)?oldid=4123932"
Community content is available under CC-BY-SA unless otherwise noted.