Conquer the galaxy (all failed).

Lokar is a minor antagonist from the original Space Ghost cartoon from the 1960s. Much like Zorak, he was a bipedal insectoid who commanded a massive army of other insectoid aliens.

Lokar was an intergalactic warlord from a race of humanoid bug creatures that resembled locusts. He lead an army of powerful, robotic locusts who ate metal and could swarm entire ships, devouring them and their crew whole in seconds. He was highly intelligent and deceptive, able to build a massive computer system to command his army and also craft an elaborate disguise that made him resemble Space Ghost exactly to fool Jan and Jace.

In the original series, Lokar was last seen pinned under one of his own machines while his base exploded. However, given how often villains in Space Ghost would appear to die only to reappear later, completely unharmed, it is unlikely Lokar actually died.

In Space Ghost Coast to Coast, Lokar was one of several villains pardoned by Space Ghost help him produce his talk show. Lokar was just as evil as ever, but far more subdued and much less violent. Instead of using weapons, he chose to insult and demean his victims, constantly taking potshots at Space Ghost and even the other villains. He and Zorak despised each other, due to their extremely similar nature. He is also a very snobbish person, considering almost everyone else to be beneath him. He vanished after Season 5, with an in-character audio commentary from the Space Ghost: Coast to Coast Volume Two DVD explaining that Lokar died at some point alongside Metallus. However, they both returned in the Season 11 episode "Stephen", in where they are shown to be alive and well.

Due to his extreme similarity to Zorak, Lokar replaced him in the Council of Doom during the Space Ghost: Coast to Coast era. He also took Zorak's place in the band on several occasions. 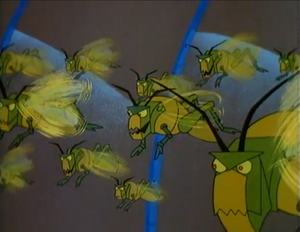 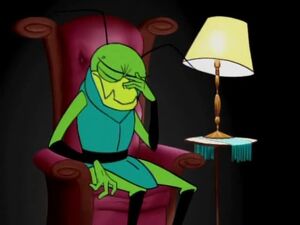 Lokar sitting in a chair on Space Ghost: Coast to Coast.