Villains Wiki
Register
Don't have an account?
Sign In
Advertisement
in: Deities, Parents, Related to Hero,
and 18 more

Magnus Chase and the Gods of Asgard

To bring about Ragnarök (failed).

Loki is the Norse Aesir half-Jotunn God of Mischief and the main antagonist in the Magnus Chase and the Gods of Asgard trilogy. While treated as a normal member of the Aesir tribe, he is known to switch his allegiance often and is destined to ultimately side with the giants and lead them against the gods. Due to being genderfluid, Loki can change gender. As a male, he is the father of Vali, Narfi, Hel the ruler of Helheim, Jormungand the World Serpent, Fenris Wolf, and the demigod Samirah al-Abbas. As a female, Loki is mother of the eight-legged horse Sleipnir (due to taking on the form of a mare to give birth to him) and the demigod Alex Fierro (whom like Loki, is genderfluid). He is based on Loki from Norse mythology.

Loki is a son of Laufey (mother) and Frabauti (father). When Frigg had a vision of her son Baldr dying, she made things promise to not hurt Baldr. Loki caused the death of Baldr by making a spear from mistletoe (the only thing vulnerable to Baldr) and gave it to Baldr's blind brother Hodr who throw it and it killed Baldr.

The gods punished Loki for this by binding him to a rock with the entrails for his sons Vali and Narfi with a snake above him that would drip it's venom down below. Loki's wife Sigyn would catch the venom in a goblet, but would every now and then would go to empty it, resulting in some the snake's venom dripping onto Loki's face, causing him pain of which would cause earthquakes.

Despite being bound to the rock, Loki could still produce physical manifestations of himself to appear in Midgard and was able to father Samirah with a doctor named Alyesha al-Abbas, and also in his female form had a brief relationship with Mr. Fierro and gave birth to Alex (who like Loki was genderfluid).

Magnus Chase and the Gods of Asgard

The Sword of Summer

Loki frequently appears in Magnus Chase's dreams to convince him to give up tying Fenris Wolf. The first time was when Magnus died. The second was after Magnus' first battle practice where he told Magnus he would eventually sit on Odin's throne. The third was when Magnus and his friends jumped into a river to get out of Nidavellir the land of the Dwarves and promised he would be reunited with his mother Natalie in Helheim if he gave the sword of summer to his uncle Randolph. Loki hopes to bring Ragnarök by manipulating Randolph.

After Magnus re-tied Fenris Wolf, Loki appears in Randolph's office, revealing he was the priest at Magnus' funeral. Loki gives Randolph a burn scar on his face for failing him. He says that there are many triggers for Ragnarök.

The Hammer of Thor

Two months later in March, it is discovered that Loki has another demigod child; a genderfluid daughter named Alex Fierro (who was born to Loki's female form) who becomes an Einherjar at Hotel Valhalla. Loki revealed to Alex's father and stepmother about the Nine Worlds, which caused Alex to be resented for who she was.

After Thor's hammer Mjølnir is stolen by a giant named Thyrm, Loki arranges for Samirah to marry the giant, in order to get the hammer. He also reveals to Samirah's grandparents Jid and Bibi that Samirah is a Valkyrie.

After Magnus and his friends defeat an army of draugr (who had the Skofnung Sword) Loki and Randolph arrive. Loki makes Samirah fall unconscious when she tries to attack him and tells the group that the sword is the bride price, before ordering Randolph to stab Magnus's dwarf friend Blitzen with the Skofnung Sword (which can only be drawn if women are not present (unless they are unconscious), it must avoid daylight, it can only be sheathed after tasting blood and can only be wielded by those of noble lineage). Loki then says that the Skofnung Stone is also needed.

At the end of the novel, during the wedding of Thyrm and Samirah (really Alex in disguise), they along with Magnus and the real Samirah (disguised as Alex) go to Loki's prison and see his true self and state. He demands to see the bride to ensure it is Samirah and sees that it is (unaware that Alex changed her appearance to look like Samirah). Loki then has Randolph take the Skofnung Sword and Stone from Magnus and has him use the sword to cut his bonds, despite Randolph's warnings that women are present.

After Randolph cuts though the bond, Loki kills the venomous snake that has been dripping it's venom on him for many years, before fleeing as the other gods arrived, whilst Randolph falls into an abyss to Helheim.

The Ship of the Dead

Loki joins forces with a giant named Hrym and plans to sail Naglfar (a ship made of the fingernails and toenails of fallen warriors) from Niflheim (the world of ice and fig) to start Ragnarök and battle the gods.

Later in the book, Magnus and his friends arrive in Niflheim and come onboard Naglfar. Magnus challenges Loki to a flyting (a duel of insults), to which Loki refuses and says he will just kill Magnus instead. However, Hrym makes him change his mind.

Loki appears to be winning as his insults cause Magnus to shrink. However, Magnus fights back and talks of the glories of his friends. This causes Loki to shrink to being a few inches tall. Magnus's friend Mallory Keen then traps Loki in a walnut shell.

After escaping Hrym and his forces, Magnus and his friends deliver Loki to Odin, who says that Loki will be returned to his prison, which will be made more secure (in order to prevent it being found).

As a manifestation, Loki has dirty blonde feathery hair (with red, blonde, and yellow tints), tousled in a fashionable I-just-got-out-of-bed-and-I-look-this-good sort of way, and he is seen wearing a Red Sox jersey, jeans, and white tennis shoes. Loki is considered shockingly handsome, though his appearance is somewhat ruined by his scars - burn tissue splashed across the bridge of his nose and his cheekbones (caused by the snake venom dripping onto his face), like impact lines on the moon's surface, while Loki's lips are marred by a row of welts all the way around his mouth, much like many piercing holes that had closed over (marks from the time his lips used to be sewn together by the dwarves).

However in his true body, Loki is sickly thin, has a melted mask of a face and has bleached white hair.

Loki's eyes have an intense glow to them, much like those of his daughter Samirah, with his gaze flitting restlessly, like fire in a hearth, pushed by the wind, looking for anything it could set ablaze

Loki is sly, manipulative, charming, humorous, mischievous, quick to anger, and cruel when he needs to be. Despite this, he does have affection for his children, especially Samirah (though he did try to interfere with her life and her relationships with her grandparents and her fiancé Amir) and his sons Vali and Narfi (the latter two were slain by the gods and their entrails were used as ropes to bind Loki to a slab of rock under a serpent as punishment for Loki killing Baldr, the Norse Aesir God of Light).

It seems that Loki does not have a good relationship with Alex as he permanently opened the eyes of her father and stepmother to the Nine Worlds, causing the latter two to treat Alex badly because of her being genderfluid. 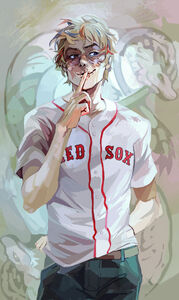 Loki has the ability to change gender as he once took the form of a mare (a female horse) and mated with a stallion (a male horse) named Svadilfari which resulted in the birth of their son Sleipnir, a horse with eight legs and became Odin's steed. Also only Odin can command Sleipnir.