Son of the Mask

Norse God of Mischief and Night

Creator and owner of the Mask of Loki

Immortality
Shapeshifting
Trickery
Essokinesis
Ability to create absolutely anything out of nothingness.

Searching for and reclaiming the Mask of Loki.

Recover the Mask of Loki.

Earn the respect of his father Odin.
Find a friend.(all succeeded)

Loki is the unseen overarching antagonist of the 1994 film The Mask and the main antagonist of its 2005 critically panned stand-alone sequel Son of the Mask.

He is the Norse god of mischief and night, who delights on playing tricks on people. He is the creator of the Mask of Loki, the titular item of the franchise.

Loki wants his Mask back from the main hero; Tim Avery. In order to get his mask back, he kidnaps Alvey, Tim's son and tried to bargain within the hour. When Tim tried to give Loki the mask he grew to attached to Alvey. Tim puts on the mask and fights Loki. But since they were evenly matched, Loki decided that they should let Alvey decide. Alvey was about to choose Loki, however, Tim took off the mask, and Alvey decided Tim.

When Loki's father discovered Loki's failure, he comes and start coldly insulting him and threatening to banish him. Tim, who cant help but feel sympathy for Loki, then decided to give Loki the mask, and he returns to Asgard along with his father Odin.

As a god, Loki is immortal and omnipotent, and can do anything he wants, even bending and breaking the rules of the universe, time and space and warping reality (much like a cartoon character) 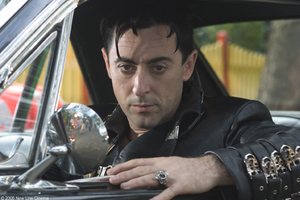 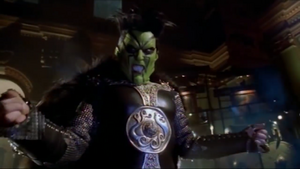 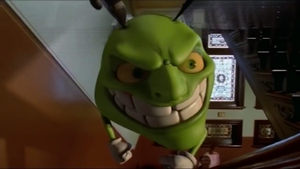 Loki as a bee 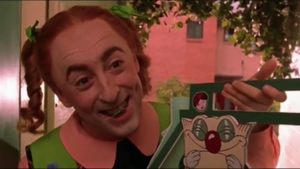 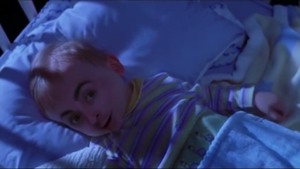 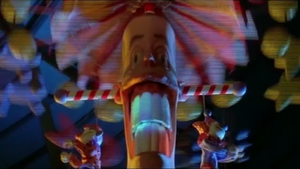 Loki as something out of Beetlejuice 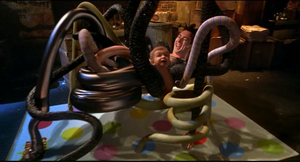 Playing Super Twister with Alvey
Add a photo to this gallery

Retrieved from "https://villains.fandom.com/wiki/Loki_(Son_of_the_Mask)?oldid=4040233"
Community content is available under CC-BY-SA unless otherwise noted.