Destroy Thor.
Conquer all the Nine Realms (both failed).
Gain control the Throne of Asgard (briefly succeeded twice).
Manipulate Thor into killing Bor Burison so that Thor would be Exiled from Asgard.
Manipulate Odin into adopting him.
Get revenge on Laufey for abusing him.
Bring on Ragnarok (all succeeded).

Loki Laufeyson, also known as God of Mischief, the God of Magic and the God of Evil, is one of the main antagonists of the Marvel Comics universe. He is the archenemy of his half-brother, Thor, Avenger and God of Thunder. He is the main antagonist of the Thor comics and Marvel Disk Wars: The Avengers and one of the two secondary antagonists (alongside Kang) of the Avengers comic book series, being the very reason they were formed in the first place. This lead to his appearance in the Marvel Cinematic Universe as the secondary antagonist of the Infinity Saga. In modern times he has become an anti hero at times.

Loki was not born as an Asgardian as Thor was, but rather as a Frost Giant. When his true father, Laufey, died, Asgard's King Odin decided to take the infant Loki in and raise him as his own son. Loki was always more able to survive the cold than anyone else. Throughout his childhood and adolescence, Loki was resentful of his brother, as he was physically inferior to him in every way; except sorcery. Loki was a natural when it came to controlling the dark arts, and he put that to his advantage. He hoped to one day defeat his brother and father and become ruler of Asgard.

When into his adulthood, Loki gained the reputation as the God of Mischief. But his tricks increased from mischievous, to downright malicious and evil. He soon became known also as the God of Evil. Loki tried several times to usurp the throne of Asgard and destroy Thor, but failed at each attempt. Odin imprisoned him several times, but each time he escaped.

Loki had already left Asgard, and continued his evil work and plans of revenge on earth. He empowered several normal criminals with supernatural powers in order to help him defeat Thor and complete other schemes, including Absorbing Man, and the Wrecking Crew (Wrecker, Thunderball, Piledriver and Bulldozer). Loki also sometimes shared his schemes with The Enchantress and The Executioner, who also sought vengeance on Thor.

Loki has often made deals with or teamed up with various supervillains, most recently and infamously making a pact with Norman Osborn and his Dark Avengers and letting them into Asgard to conquer it in the Dark Reign saga. Recently Loki was reincarnated multiple times with Kid Loki,Teen Loki,Old Loki,and the recent male and female incarnations some of them are trying to reform while some are trying revert back into his villainous ways.

Loki is the God of Mischief and an expert liar. Though Loki tries to take over Asgard and Earth, all Loki really wants is the approval of his father and his brother. He is a smart, talented, and intelligent man and he will stop at nothing to fulfill his quest. While he may appear nice, in truth Loki believes he is destined for a "glorious purpose" whether it be ruling Asgard or Earth. Loki is usually considered as a liar and trickster, but this is only because he wanted to be an equal to Thor. Therefore, Loki does have emotion and he does communicate with some people despite his power and arrogance.

Loki is a master sorcerer, and has a wide variety of powers and abilities, including:

Despite being a member of the Frost Giants, Loki possesses similar attributes to those possessed by the Asgardians.

Loki also wields a magical sword and staff, both of which he can use with great skill.

Spider-Man and His Amazing Friends

Loki appears in the Spider-Man and His Amazing Friends episode, "The Vengeance of Loki".

Loki appears in Marvel Disk Wars: The Avengers as the main antagonist of the show, where he leads the group of five masked human villians called the Celebrity Five.

Loki appears in the TV show, Avengers: Earth's Mightiest Heroes, as one of the main antagonists. He was the one responsible for creating the Masters of Evil through the Enchantress in order to distract Thor and the Avengers while he could use the Odinforce to take over Asgard and seven of the other nine realms.

He was voiced by Graham McTavish, who also portrayed Zoran Lazarević in Uncharted 2: Among Thieves, Joseph Bertrand III in inFamous II, Father Kinley and Dromos in Lucifer, Dracula in Netflix's Castlevania and the Saint of Killers in Preacher.

In the Ultimate Marvel Universe/Earth-1610, Loki is still the adopted brother of Thor and is the primary villain of the Ultimates 2 comic series. During the events of the series, Loki disguises himself as "Gunnar Golmen" and manipulates the entire world and the Ultimates into believing that Thor was his delusional brother who had stolen an experimental harness and hammer made in the Thunder God's likeliness, causing Thor's teammates to turn on him and eventually arrest him. Loki then assembles his own group of villains known as the Liberators in an attempt to take over the United States and ignite WWIII before Thor and the Ultimates eventually defeat him, his army, and the Liberators while also stopping his invasion.

This version of Loki has powers similar to his Earth-616 counterpart like his illusion casting and his sorcery skills. However, the Ultimate version of Loki also has the power to shape reality to his own end to a solid extent. This means that he could retcon history into anything he desired by either creating events that never happened, such as his mortal identity, or erasing events as if they never happened. He could also create copies of himself, change the color of the skies, render himself near impervious to harm even from Thor's hammer, and summon armies of monsters to aid in battle.

Loki appears in the videogame Marvel: Ultimate Alliance where he joins forces with Dr. Doom and the Masters of Evil in his own plan to overthrow Odin and rule Asgard forever.

Loki is the main antagonist of the game Lego Marvel Superheroes. Loki plans to take revenge on Thor, Asgard and the Earth while aiding Dr. Doom in finding the Cosmic Bricks that would help them build a 'Doom Ray of Doom', which Doom believes will make him Earth's savior from universal threats. But Loki reluctantly later on allies himself with Galactus and sets out to destroy the world. He faces defeat when Galactus insists on eating him alive.

Loki appears in the video game Lego Marvel's Avengers as the main antagonist of the Avengers segment and the anti-hero of the Thor: The Dark World segment. His role in the game is similar to that of his movie appearances. His dialogue is done by archive footage from the movie.

Loki narrates at the beginning of the play about heroes and villains and then mentions about the Cosmic Cube. His brother Thor appeared before the audience, telling them not to be alarmed as he had the Cosmic Cube and destroyed it to prevent anyone from using it. Thor then vowed to the audience that he will scatter its pieces to the corners of the Earth. As Thor soon departed, Loki appeared, vowing to take over the world as he brings forth a scatter of the Cosmic Cube's dust to create a small piece of it before he flies away.

Loki dispatches his Chitauri army to capture Nick Fury and Maria Hill. As they bring them before Loki, Loki shows them a device draining the power from the X-Men members Wolverine, Cyclops, and Storm and feeding it to the piece of Cosmic Cube. Spider-Man and Iron Man soon arrived and fought off the Chitauri army and freed Wolverine. However, Loki managed to get away with the cosmic piece and the other two X-Men members.

Loki appears before the Avengers after they claim all the pieces of the Cosmic Cube and then sarcastically praises Captain America for his believed death. Thor charges at Loki for mocking his comrade, but Loki shoves Thor with his power, as he claims that the Cosmic Cube is making him stronger. He then unleashes his army of supervillains upon the heroes and a battle soon occur between them. During the climax of the battle, Loki unleashes the power of the Cosmic Cube upon the heroes, making them weak as they lay across the floor. Luckily, Iron Man manages to revive everyone once he unleashes electricity upon them. Hulk then appeared and attacked Loki with ease, allowing the heroes to subdue him and Thor to send him to an Asgardian prison. As Loki is casted away, he vows to return. 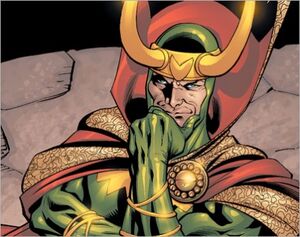 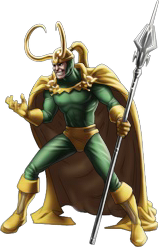 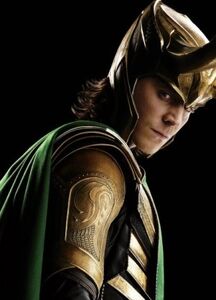 Loki, portrayed by Tom Hiddleston as he appears in the Marvel Cinematic Universe. 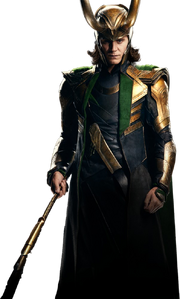 A promotional photo of Tom Hiddleston as Loki. 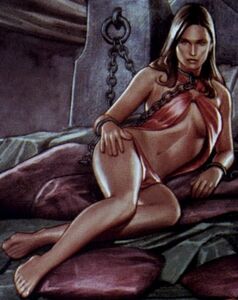 Loki in a human female form enslaved by Doctor Doom. 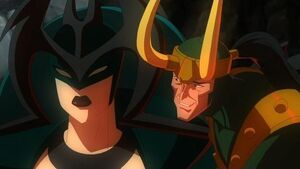 Loki deceives his own daughter Hela into transporting Hulk to Hel in order to claim his soul completely. 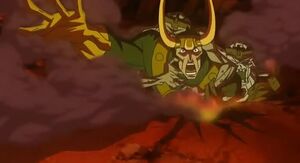 Loki attacked and being dragged by the undead inhabitants of Hel at his daughter's command. 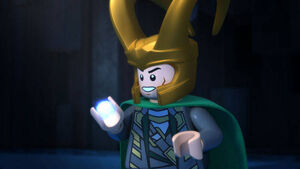 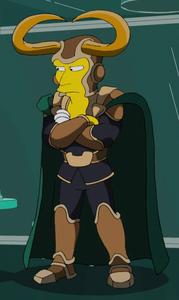 Loki in The Simpsons. 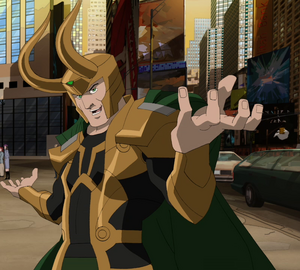 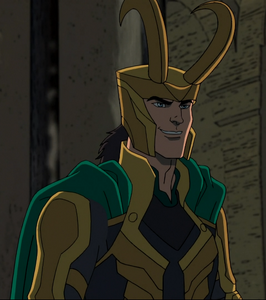 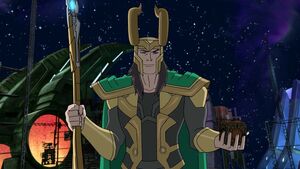 Loki in the Guardians of the Galaxy animated series. 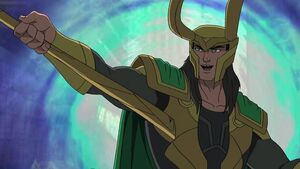 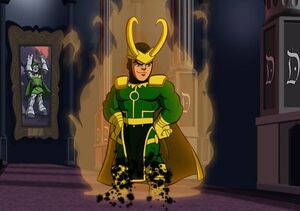 Loki in The Super Hero Squad. 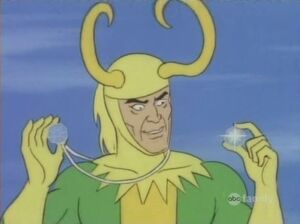 Loki in Spider-Man and His Amazing Friends. 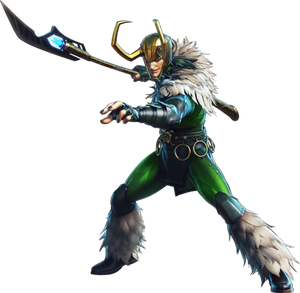 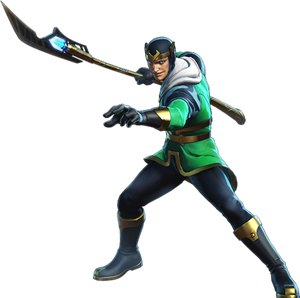 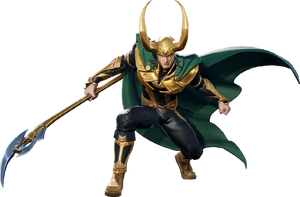 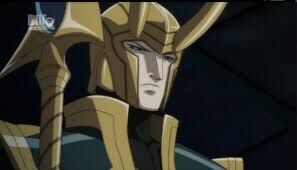 Marvel Future Avengers
Add a photo to this gallery 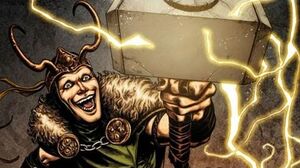 Retrieved from "https://villains.fandom.com/wiki/Loki_Laufeyson?oldid=4065253"
Community content is available under CC-BY-SA unless otherwise noted.