Loly Aivirrne is a minor antagonist in the anime/manga series Bleach.

She was voiced by Hana Takeda in Japanese and Colleen O'Shaughnessy in English.

Loly is a small Arrancar that wears a dress that exposes a large amount of her stomach and cleavage. Her hollow mask cover her left eye, which is shaped around her eye with teeth dotted along the bottom of the mask, and there is an extension from her mask into her hair which almost gives the appearance of a hair tie.

When Aizen was treating Orihime as a guest, Loly didn't like that one bit. So she, along with her friend/partner, Menoly Mallia entered into Orihime's quarters to "have some quality girl time with her". Loly thought that Orihime was being treated like a princess, so, out of jealous rage, attacked Orihime. While both of them were attacking Orihime, Grimmjow blasted a hole into Orihime's room.

When Grimmjow entered the room Loly asked what Grimmjow was doing. He replied by kicking Loly in the stomach. After blasting Menoly with a Cero, Grimmjow slowly walked towards Loly and proceeded to break one of her legs and knock her out.

After Grimmjow rescued Orihime from Loly and Menoly, Orihime went to Loly. Loly didn't want Orihime near her and slapped her.

Despite this Orihime healed Loly's broken leg, which surprised Loly. She was even more startled when Orihime completely healed Menoly from death.

When Ulquiorra entered the Orihime's room, both Loly and Menoly were still in there. He asked them who was responsible, in which they replied that it was Grimmjow.

While Ichigo was fighting Ulquiorra for the second time, Loly and Menoly decided to terrorize Orihime again. They managed to grab Orihime from the shadows and tore off her clothes. When Ichigo saw what was going on, Loly threatened that she would rip out one of Orihime's eyes if he came any closer. Ichigo used a Getsuga Tenshō, only to be blocked by Ulquiorra. Thinking that Ulquiorra was protecting them, Ulquiorra replied that he wasn't trying to rescue them. While both Loly and Menoly were continuing to torture Orihime, Yammy appeared and tried to help Ulquiorra. With Ulquiorra's denial, Yammy slapped Menoly. Loly proceeded to fight Yammy but was knocked back with minor injuries. Being injured, Orihime came and healed Loly despite Loly's physical abuse. Loly thought that Orihime enjoyed watching her in pain, but was shocked when Orihime healed her. With that kindness and compassion, Loly decided that she wanted to protect Orihime from Yammy. When Yammy was about to grab Orihime, Loly usedt her Zanpakutō and managed to cut Yammy. Loly then released her Zanpakutō, yelled to both Yammy and Ulquiorra that she'd kill them. Despite this, Loly was still defeated by Yammy and was tossed through a wall. It was later revealed that Uryū saved Loly by using one of his arrows and pinning he to the tower.

While Loly has the same personality in both the anime and manga, there are several differences in both versions.

She is infatuated with Aizen, as shown by her anger at Aizen's interest in Orihime. Loly is also very impulsive and very short tempered, seen when she almost beats Orihime to death after she asked her to leave her room (and Menoly tried to stop her from "taking it too far", but could not stop her).

In the anime, Loly's personality is pretty much the same but given a bit more detail. When Yammy injures her, Loly was accusing Orihime of enjoying her suffering, but was shocked as Orihime heals her wounds again. When Yammy attacks Orihime, Loly defends her, hatefully saying she owes Orihime and the ensuing battle lasts a bit longer, but ending practically the same way. When she is in Yammy's grasp, Loly shouts at Orihime not to help her, still declaring her hatred towards her. But before she meets her fate at Yammy's hand's Loly gave Orihime a small smile. The smile Loly gave Orihime, as well as the act of defending her, may imply that while she still hates Orihime, she might have come to terms with her feelings, or it may simply have been a farewell and returning favor for healing her.

Loly has somewhat high spiritual pressure. She can produce balas, which are Ceros that are much weaker, but 10x faster. Her Zanpakutō is called Escolopendra, which resembles a small knife. When she enter into her Resurrección, her release command is "Poison". In this form, Loly's arms are replaced with bladed whips that produce acid. 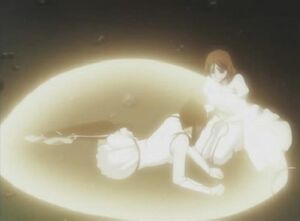 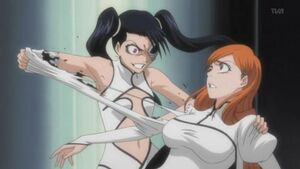 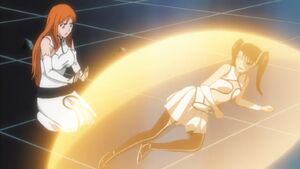 Loly getting healed by Orihime, again. 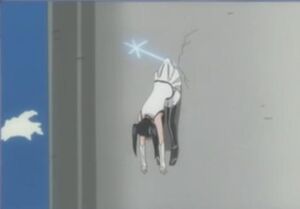