Leader of the Pyke Syndicate

Aid the Shadow Collective in taking over Mandalore (succeeded).

Conceal the Pykes' involvement in the murder of Sifo-Dyas
Kill Count Dooku (both failed).

Greedy Gang Leader
Lom Pyke is a minor antagonist in the TV series Star Wars: The Clone Wars, appearing in season 5 and season 6. He is the leader of the Pyke Syndicate criminal organization, and is voiced by Matt Lanter, who also voiced Anakin Skywalker in the same series.

About ten years before the Clone Wars, the Pykes were contacted by a man named Darth Tyranus, with whom they made a deal to kill Jedi Master Sifo-Dyas, who was traveling to Oba Diah to negotiate with the Pykes. When the Pykes shot down his ship, Sifo-Dyas was killed, but Chancellor Valorum's aide Silman, who accompanied Sifo-Dyas, survived. The Pykes imprisoned Silman, intending to use him as a bargaining chip if the Galactic Republic or the Jedi were ever to find out what happened.

During the Clone Wars, Lom and the Pykes joined the Shadow Collective, allying themselves with Darth Maul, the Death Watch, and the Black Sun. As part of Maul's plot to take over Mandalore, the gangsters would attack the capital city of Sundari and the Death Watch would arrest them to make themselves heroes in the eyes of the people. Lom led a small group of criminals to attack and rob the bank of Sundari. Once the plan had worked, the Death Watch betrayed and imprisoned Maul and the criminals. However, Lom, along with the rest of the Collective, was freed when Maul took control of Death Watch and Mandalore himself, and continued to rule the Pyke Syndicate.

Later, Jedi Knights Obi-Wan Kenobi and Anakin Skywalker traveled to Oba Diah to investigate the death of Sifo-Dyas. Lom offered them a toast to friendship, while trying to cover up the Pykes' tracks. Anakin Force-grabbed the necklace of Silman from Lom, demanding the truth. Lom then told the Jedi the truth behind Sifo-Dyas's death, and offered them Silman in exchange for a pardon for the Pykes' treachery.

Darth Tyranus, who was none other than Count Dooku himself, arrived on Oba Diah to erase all links to the investigation. Lom told Dooku he had no business left with the Pykes, and sided with the Jedi against him. He was then killed by Dooku, who stabbed him with his lightsaber. 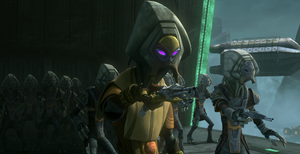