Head of his flock

Feed on the animals that die in the flood (failed).

He is a vulture that lives in the Ice Valley with his flock in search of prey to torment and eat. He warns the herd animals that the melting ice will cause a flood that will drown everyone if they take the route to the giant crust, chasing them along the way and feeding on those who die trying.

He was voiced by Will Arnett, who also voiced Vlad Vladikoff in Horton Hears a Who!, Mr. Perkins in Despicable Me, Slade in Teen Titans Go! To the Movies and Sweet Pete in Chip 'n Dale: Rescue Rangers.

He and his kin constantly talk about how much they'd love to eat the main characters, are snide, love heckling the "food" and are generally unpleasant. On the other hand he wasn't lying about the "boat" at the end of the valley, and the vultures guide the animals safely through honesty - and rush them onboard when the flood is about to happen, though they have no problem eating the ones that don't make it.

Rather than let all the animals die in the flood and just take their pick when it's done (which would probably be wasteful anyway), he and his flock are content with leading them through the valley and taking their pick of those who die along the way.

After the animals ignore Manny's warnings that the dam will break and the entire valley will be flooded, Lone Gunslinger confirms that meltdown is true. Attracting everyone's attention, the vulture warns them that they only have days to leave The Waterpark and go to a "large bark" with enough capacity to house all the animals and use it as a boat, located at the end of the valley. Adding one last message: He tells them that if hardly anyone survives the flood, it would be their perfect opportunity to feast on hordes of corpses. After provoking embarrassment in the animals, he is made to fly.

In the waterpark evacuation, the animals were constantly watched by The Lone Gunslinger and The Traffic Vulture who commented on any injuries during the march. Then the vultures fixed their eyes on a wounded animal and flew towards it.

During the night, the herd settled down to rest in a forest until dawn. Before sleeping, Sid talks to Diego and reiterates the vulture's words; that tomorrow is when the flood would drown everyone. When everyone sleeps, they are watched by The Lone Gunslinger from the branch of a tree.

Later, Manny, Ellie, Sid, Diego, and The Possums are eerily watched by The Lone Gunslinger and the other vultures in various directions. When Sid wonders what they are thinking, The Lone Gunslinger responds by singing the melody "Food, Glorius Food" accompanied by his flock, making it clear that they want to eat their remains when they die.

The Lone Gunslinger is last seen flying over the animals heading for the large bark alongside the traffic vulture, keeping an eye out for someone to get careless and die.

It is unknown what will have happened to The Lone Gunslinger when everyone was saved from the flood, although it is most likely that he was disappointed and preferred to go to another land where he could get carrion, accepting the survival of the animals. However in the Illustrated Storybook, The Lone Gunslinger along with the other vultures are alternately shown to feed on Cretaceous and Maelstrom when the water level drops thanks to the breaking of one the ice walls. 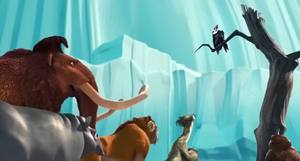 Lone Gunslinger warning Manny and the other animals that they will soon melt to death if they don't leave the valley. 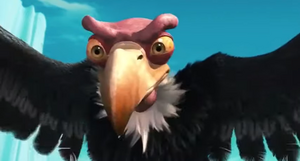 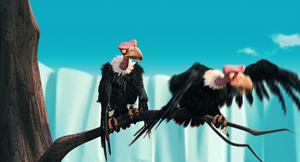 The Lone Gunslinger talking to the Traffic Vulture about hunting down a badly injured animal in herd's march. 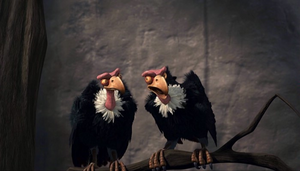