NOTE: This article is about the incarnation of Long Haul from the Transformers live-action film series. The mainstream version can be found here: Long Haul.

Hanging out with his fellow Constructicons to await orders from any high ranking Decepticons such as Soundwave, Starscream or Megatron.

Transformers Revenge of the Fallen

Long Haul, alongside Rampage, Mixmaster and Scrapmetal are first seen aboard a cargo ship. Ravage, who was sent by Soundwave, landed there and called them to accompany him into the Laurentian Abyss to revive Megatron. Upon arrivng there, Scalpel  examined their leader's corpse and stated they needed a small Constructicon to repair him. Long Haul and Mixmaster proceeded in killing Scrapmetal as a source for spare parts and Scalpel injects the shard to revive him, which is a success.

At some time later, Long Haul joined the rest of the Decepticons consisting of Starscream, Ravage, Mixmaster, Rampage, Scrapper, Bonecrusher (or a lookalike Decepticon) and various nameless protoforms. He is one of the biggest Decepticons on the field as he manages to fought against NEST forces in the Egyptian town near the ruins of the pyramids, killing many soldiers and even shooting a Jordanian helicopter. Long Haul was then killed on an airstrike as his left tire fells off during the bombing.

Another Long Haul who didn't transform into robot mode was seen forming the right leg of Devastator before being killed by the USS Kidds experimental raygun.

Despite being being killed in the second film, several Decepticon drones resembling Long Haul were seen in Transformers: Dark of the Moon. They include Igor, a Long Haul head who accompanies an exiled Megatron in Africa, an unnamed garbage truck Decepticon who have been confused with Junkheap (nicknamed "Sledge" by fans) that resembles Long Haul only with noticable dump truck parts removed and a lesser drone in the Battle of Chicago who looks exactly as the actual Long Haul, before being killed by Optimus Prime.

Transformers Revenge of the Fallen: The Game

Long Haul appeared in the video game adaptation of Transformers: Revenge of The Fallen appearing as one of the playable Decepticons alongside Sideways, Grindor, Starscream and Megatron. He serves as the Decepticons' ground-based heavy hitter with his long-ranged charged grenades and flamethrower and is able to initiate a combat repair sequence that would rapidly regenerate his health, much like Ratchet as he serves as the Autobot medic's Decepticon counterpart.

After Sideways cleared out most of the Protectobot units from Shanghai construction area, Long Haul was depolyed to upload a virus on all NEST communications arrays in the area. Soon after, Long Haul was sent to the Shanghai spiral highway to destroy 2 NEST field headquarters and their defenders, drawing Ironhide out of the open. Both combatants were roughly evenly matched, but Long Haul's long-range charged grenades and his combat repair sequence gave him a change to beat Ironhide. He was soon sent back to the spiral highway to follow in the wake of a cloaked Autobot probe, which was to add insult to the injured created by the Decepticon technology. Long Haul then shrugged off attacks by the Autobot defenders, chased after the probe and destroyed it once it showed up.

Long Haul was then sent to the United States West Coast oil refinery to capture Mikaela Banes, who knew the location of the Allspark fragment. He destroyed numerous buildings to force the engineers to evacuate, then brought them to an interrogator probe to find Mikaela's whereabouts. One manages to point the location before expiring, thus Long Haul was able to capture her. Unfortunately, she was rescued by the Autobots after Long Haul left the area.

After Megatron was ressurected, Long Haul was deployed to the East Coast industrial area to chase and destroy another cloaked Autobot probe. Soon after, he was sent to the east coast city with the L-train to send a message to the humans that NEST and the Autobots could no longer protect them. Despite overwhelming odds, Long Haul attacked and destroyed the power plant and the televisual broadcasting station.

Following their journey to Egypt, the Decepticons deiscovered that the Autobots had given the humans the Axiom Gun, which was being used in Cairo to attack the Decepticons. Furious, Megatron ordered Long Haul to destroy the weapon.

Long Haul appeared in the Autobot campaign serving as a boss on Ironhide's missions. 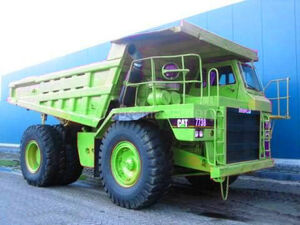 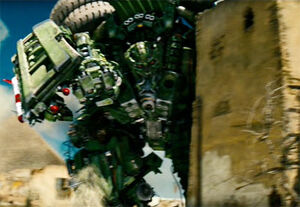 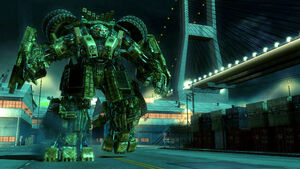 Long Haul in Transformers: Revenge of the Fallen: The Game