Pirate
Leader of the pirate crew

Find Flint's treasure. (succeeded for a while).

Long John Silver is the ship's manipulative and treacherous cook and the main antagonist of the 1996 film Muppet Treasure Island.

He was portrayed by Tim Curry, who also played Frank-N-Furter in The Rocky Horror Picture Show, the Lord of Darkness in Legend, Wadsworth in Clue, Pennywise in the It television miniseries, Thaddeus E. Klang in TaleSpin, Taurus Bulba in Darkwing Duck, Hexxus in FernGully: The Last Rainforest, the Evil Manta in The Little Mermaid television series, Cardinal Richeliu in The Three Musketeers, Farley Claymore in The Shadow, Kilokahn in Super Human Samurai Syber-Squad, Drake in The Peeble and the Penguin, Dr. Anton Sevarius in Gargoyles, Simon Doonan in the Titanic TV movie, Maestro Forte in Beauty and the Beast: The Enchanted Christmas, Slagar the Cruel in Redwall, Dr. Slicer in Recess, Ben Ravencroft in Scooby-Doo and the Witch's Ghost, Big Brother in Johnny Bravo, the Mouse King in Barbie in the Nutcracker, Professor Calamitous in The Adventures of Jimmy Neutron: Boy Genius, Scarlet Fever and Nick O' Teen in Ozzy & Drix, Dale "The Whale" Biederbeck in Monk, Belial in The Legend of Atlantis, El Maléfico in ¡Mucha Luca!: The Return of El Maléfico, Von Talon in Valiant, Anatoly Cherdenko in Command and Conquer: Red Alert 3, Philippe in Barbie and The Three Musketeers, Billy Flynn in Criminal Minds and Emperor Palpatine in Star Wars: The Clone Wars.

Silver befriends young Jim Hawkins. One night, after Silver asks Jim how old he was when his father died, Jim replies, "Seven." Silver is touched by the revelation, and says, "I were eight when my father died at sea. First mate, he was."

However, Silver is actually planning a mutiny amongst the crew of the Hispaniola, so as to seek Captain Flint's treasure himself. He first tricks Sam Eagle into leaving the ship and giving him the keys to the safe, which Kermit put the map into for safekeeping. Faking Sam’s death, Silver secretly plans to overthrow Kermit. He is a deceptively charming man at first, until he is overheard by Gonzo, Rizzo and Jim as he reveals his dastardly plans to his fellow pirates aboard the Hispaniola.

During Silver's siege on Treasure Island, it is suggested that Long John Silver and Miss Piggy share a romantic history. Though he and his posse manage to find the treasure, they end up having a brawl against Hawkins and his friends. After the defeat of Silver's crew, Silver surrenders, and he and his crew are locked up in the brig to await trial for their crimes.

At the end of the film, Silver makes off with whatever treasure he can in what is later revealed to be a leaky lifeboat — but not before saying a rather touching goodbye to Jim Hawkins. He declares he could "never hurt" Jim, because he is "honest and brave and true" — something he himself isn't. On Jim's tearful words, Silver rows away, never to return. His boat later sinks however, and he is left marooned on Treasure Island. 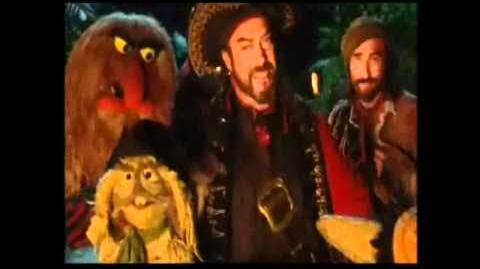