The Grief Monster
It

Stalking and killing people who cannot let go of their past.

Brainwashing people into becoming his servants.

Get his victims to release their guilt or kill them if they do not (ongoing).

The Look-See is the titular main antagonist of the Look-See YouTube horror series from the channel "Crypt TV". He is an evil entity who targets people who need to release something about themselves, otherwise he will kill them.

He was portrayed by Sean Brison.

A woman named Jenni enters a public bathroom and starts panicking for unknown reasons. She hides in one of the stalls and keeps noticing the Look-See's shoes in the stall next to her, when she peaks over the Look-See is gone and she goes to exit the stall, only to look down and see the Look-See's shoes in front of the stall. The Look-See tries dragging her out but she persists and drops her wedding ring in the toilet. She then looks up to find the Look-See standing on the toilet as he lifts her up into the air and tears her hand off, as she didn't drop the ring in and caught it at the last second.

Another woman by the name Marlene is resting in her house. She starts noticing someone spying on her. She starts going out, looking around her house trying to solve who is spying on her. In the end she runs away from the Look-See and hides in the bathroom, peaking out to make sure the coast is clear and having the curtains shut in front of her. She is then revealed to have been decapitated by the Look-See.

The episode begins with a man baking a birthday cake by himself. Intercut with this is shots of a young girl apparently having drowned. The man eats the cake while looking at photos of him and the girl, who seems to be his daughter.

He looks up to find what appears to be the girl standing in the door way to the room, only for her to disappear once he draws close. The man investigates, only to be attacked by the LookSee and chased back into the kitchen.

The man throws away the cake, and this seems to make the Look-See vanish, only for it to reappear inches from his face, it being revealed that he did not throw away the slice he had been eating.

The Look-See twists the mans head back wards and cuts off both his arms, leaving in his severed hands on the table and taking with it the child's red ribbon.

The part begins with revealing that despite the injuries suffered, Jenni is still alive and is currently recovering in a hospital room. She awakens to find what appears to be her husband sitting at the foot of her bed, only for his eyes to vanish as his now clawed, red gloved hand squeezes down on one of Jenni's broken legs before turning into the Look-See.

The demon calmly opens its mouth, vomiting up its signature stop watch. This enrages Jenni, who grabs a nearby fork, stabbing the Look-See in the throat, causing it to collapse to the ground. Even with both legs in casts and missing a hand, Jenni painfully crawls with her remaining arm to the creature, stabbing down and missing as it flees the room.

Hauling herself back onto her bed, Jenni stares at the watch she holds, looking up to find the Look-See grinning maniacally.

Season two begins during the Great Depression, where the Capshaw Family is fleeing New York City to live in a cabin secluded within the woods. As they walk, the youngest of the family,  Leah, spots the Look-See peering at her from behind a tree.

Later that night, Capshaw Father James walks into the cabins barn, finding what turns out to be a Foreclosure Notice from the very bank he and his brother used to run. Next he discovers a dollar bill with the Look-Sees infamous warning, and finally none other than the Look-Sees pocket watch.

The Look-See attacks James, being interrupted by the arrival of three bandits. Thomas, William and Raymond, the third stabbing James to death as the other two rob him of his belongings, among them the demons watch. Angered by this, the Look-See kills William by driving a pitchfork through his back. The episode ends with Thomas and Raymond fleeing from the demon.

This episode starts at a small camp occupied by Thomas and Raymond, the latter asleep in their tent as Thomas walks outside, running into a note posted on a tree, the iconic proclamation of   "If you yourself cannot release, then it will come to take a piece" Scribbled on it.

The frightened Thomas burns the note before hunkering down in the tent by himself, Raymond seemingly having vanished. From outside he spies the shadow of the Look-See creeping past the tent, vanishing right before it reaches the opening.

Thomas turns around to find the Look-See sitting behind him, scaring the young man out. Slowly rising, the Look-See toys with Thomas by peeking over the edge of the tent it is holding, before suddenly materializing from around a tree next to him. Thomas tries to run, only to trip and fall, breaking his leg.

The Look-See grabs him, hoisting its prey straight up into the air. Just then, Raymond returns from wherever he had went, correctly suspecting something is above him, he looks up. This results in him being drenched in the blood of the now torn in half remains of Thomas. Raymond then senses something behind him, whirling around to drive his switchblade into the Look-Sees gut.

Unfazed by this in the slightest, the Look-See stares at Raymond as he runs off into the woods. The man does not get far, for soon the Look-See appears once more, grabbing Raymond by the throat and effortlessly lifting him off the ground with one hand.

The creature prepares to kill him, only to freeze once it realizes that unlike all others it has slaughtered, Raymond does not regret doing anything, not even murdering James Capshaw. With this, its near constant cheshire grin turns into a frown, setting Raymond down and letting him run away. It later returns to the camp to retrieve its watch.

The episode starts with Capshaw Mother Mary finding a crude drawing within the cabin, said drawing being of her and her family with the Look-See towering over them. She turns around to find the white-fur coat she wears dangling on a rope, spattered with blood. Looking at the drawing again, she discovers the Look-Sees warning written on the back.

Said creature appears underneath the table, upside down as it goes to attack her. Mary runs for the door, stopping as the Look-See uses its powers to lift her off the ground by her pearl necklace, nearly strangling her before it breaks. Mary flees into a bedroom, finding within a note stating that "If you yourself cannot release, then it will come to take a piece.". Alongside what seems to be the sleeping figure of her deceased youngest son Theodore.

In his hands is Mary's pearl necklace, that Mary touches. This results in Theodore awakening and vomiting up blood, as from behind Mary the Look-See dangles upside down from the ceiling.  Leah enters the room to find Mary dead, her chest with a hole blown clean through it.

Leah dips her finger into the blood, using it to X out Mary from the drawing she holds, the Look-See standing next to her with a smile as she does so.

The episode starts with Capshaw child David sprinting towards the cabin after hearing Mary scream, only to stop when he sees what looks like his mother waving happily from the window. David waves back, entering the barn to find a stuffed Teddy Bear that used to belong to his younger brother Theodore, and within a hole torn into its stomach a neatly folded note with the Look-Sees warning.

As he stares at the bear, the blank faced corpses of Thomas and James hover behind him, vanishing when he turns around. Going back into the house, David finds the body of Mary seated within a rocking chair in a corner. He goes to leave, only for the Look-See to appear behind him, pinning the boy to the wall.

David flees into a bedroom, baring the door as he stares at the Teddy Bear, assuming that it is what the demon wants him to release. He tears its head off, only to be startled as a clawed, red gloved hand reaches out of it. The hand scuttles under the bed, reemerging as the Look-See, who grabs David and twists his head backwards.

With all dead save the Look-See and Leah, the two walk into the living room, where Leah sets the creatures watch on the ground just as the hands both strike twelve. Both hands then spin about as the watch opens, a darkness within it. Leah and the Look-See watch as suddenly, clawed fingers near identical to the Look-Sees, wearing blue gloves instead of red reach out, the shadow of a entity that greatly resembles the Look-See rising as Leah watches on with a terrified face.

The Look-See appears as a tall, well built man, dressing in a black suit jacket, pants and dress shoes. His long, black clawed hands wear fingerless red cloth gloves. His face is devoid of most features, lacking eyes, a nose, or ears. Crossing it is many bloody gashes. His skin color is a sickly pale orange. The only feature it does have is a large, lipless mouth filled with many pointed yellow teeth, said mouth almost always stretched in a sinister grin.

The Look-See is a very twisted and merciless creature, especially towards his victims, seemingly wielding no remorse for what happens to them. He is sadistic, cruel, and extremely demented, and has been this way as early as the 1930's. However, the Look-See  does truly want to help free people from their grief and doesn't always seem pleased when his victims have no remorse to show, as evident when he looks into Raymond's soul and sees he feels no guilt, frowning upon this realization and reluctantly letting him go. 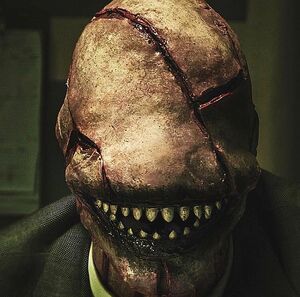 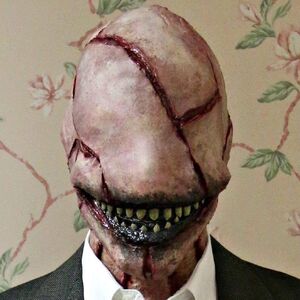 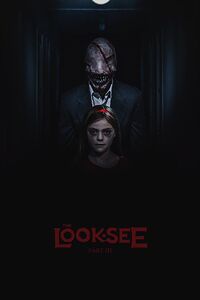