Eliminating any resistance to his rule.
Punishing subordinates for failing him.

Collect the Code Crown fragments and remake the Digital World in his image (succeeded for a while).

Merge the Human and Digital Worlds with all of space-time to reign over both (failed).

Demonic Leader
Bagramon, commonly known as Lord Bagra is main antagonist of the Digimon manga/anime series Digimon Fusion He was the leader of the Bagra Army, older brother of AxeKnightmon and the Fusion Fighters' sworn archnemesis. He later becomes a major supporting character in order to redeem himself in the Japanese-exclusive season 3.

Lord Bagra was an Unknown/Mega Level Digimon just over the height of his original Three Generals when they first appeared resembling a demon with a partial skull helmet showing dark red eyes, five red horns on his head, eight black wings on his back and a giant skeletal clawed right arm and leg. He wore a royal-looking uniform with a belt buckle, large stiff black coat, black glove on his left hand and yellow body padding. In the manga before his reconstruction he resembled Lucemon with a human appearance, short blond hair, four white wings on his back, a laurel-shaped crown or halo and white robes with sandals.

In his final form of MegaDarknessBagramon his right half still had his skeletal limbs and his left half was his younger brother AxeKnightmon's body. He had a golden breastplate with two bloodshot eyes, four large black angelic wings and wore a tattered cape with a dark red glow.

Lord Bagra was perhaps the definition of evil in that he was cunning, ruthless, merciless, arrogant, egotistical and self-absorbed; he was more than willing to sacrifice his own followers to achieve his goals or obtain victory, one of many despicable traits passed down to those very subordinates. He reveled in the agony and suffering of those unfortunate enough to stand in his way and mocked them for seemingly being entirely beneath him. This attitude foreshadowed his desire to erase everything he knew of and replace it with anything rid of what he saw as being "imperfect", even extending this belief to beyond his home.

Despite his ambiently cruel nature he was not without a lighthearted side, complementing his allies and even his foes if he felt they adequately deserved praise. He would also show surprise if events did not go according to how he personally planned them, something put on prevalent display in the final battle and his defeat.

After being reincarnated he displayed remorse for his previous actions as he gathered humans with Digimon partners to fight against his powers' creations until they and any more traces of his misdeeds could be destroyed once and for all.

Originally an Angel-type Digimon ruling over the dead, Bagramon, as he was known back then rebelled against the order of things and suffered by losing the right-half side of his body. Having replaced his destroyed self with an artificial substance made from the digital tree of King Drasil, he also acquired a ruby eye that enabled him to see everything occurring within the Digital World. At some point after learning of the Human World's existence in relation to the Digital World's he planned to conquer both realms, seeing humankind as flawed and inferior when compared to the Digimon while also hoping to expand his own world; he renamed himself "Lord Bagra" and gathered like-minded Digimon which included Laylamon, Tactimon, Blastmon and even his brother AxeKnightmon, becoming the feared leader of the Bagra Army; they were halted by a group of Digimon who opposed him before the influence of the Human World's advancements in digital technology and interference from Brakedramon split the Code Crown and Digital World apart, creating 108 Zones within the native realm and turning the other side into DigiMemory Cards, leaving Bagra's plans mostly unhindered. Some time after this his brother officially introduced the ability of Digi-Fusion (combining two or more Digimon into stronger forms) to his World by giving a device known as a Fusion Loader to a human named Ewan Amano, forcing his older sister Nene Amano to cooperate in exchange for his "safety" while fooling the younger Amano into thinking everything in the Digital World was just a realistic and absurdly-complex game. Upon hearing of this Bagra gave another human named Christopher Aonuma a Fusion Loader as well despite AxeKnightmon's objections.

After Tactimon was driven away by the combined power of the Fusion Fighters and Team Blue Flare, having had enough and seizing the opportunity Lord Bagra sent Mikey, Shoutmon and some of their friends back to the Human World after which he reassembled the fragmented Code Crown and reformatted the Digital World into Seven Kingdoms surrounding his Bagra Dark Nest. He ordered his forces to extract the "negative energy" of every opposing or neutral Digimon and feed it into the Code Crown, corrupting and turning it into the Dark Stone. When the Bagra Army's major numbers dwindled he asked his brother for help to which AxeKnightmon accepted. After five of the seven Dark Generals were defeated a second time as GrandGeneramon and the new Fusion Fighters United Army reached his fortress Bagra decided to deal with them with AxeKnightmon's aid. However, AxeKnightmon had other plans: he betrayed his brother by literally stabbing him in the back, seemingly absorbing his data with the Darkness Loader (a twisted Fusion Loader copy once used by each of the seven Generals and Ewan) and becoming Darkest AxeKnightmon.

Lord Bagra, having expected this the entire time destroyed AxeKnightmon while in their original forms on a metaphysical plane after his brother failed to match up to his self-expectations; he explained that the reason Bagra and AxeKnightmon had never been equals was due to the latter's lack of any deeper visions; with this thought he absorbed his brother's data to reform as MegaDarknessBagramon. After being knocked back as the Digi-Fuse Shoutmon X7 once again a reverted Shoutmon attacked him in vain but was instantly killed when touching him. MegaDarknessBagramon banished Mikey and the other humans to a dark area between all Space-Time Dimensions but they were freed by Angie Hinomoto and Jeremy Tsurgi with the help of Examon and WarGreymon's still-active DigiMemory Cards. When Mikey (along with Angie and Cutemon) went inside MegaDarknessBagramon's body during the final battle an image of Bagra's original form appeared and attacked Mikey but the Code Crown stopped him, reviving Shoutmon and the other fallen Fusion Fighter Digimon marking Shoutmon as the Digimon King and not Bagra. Despite fusing himself with the large structure created by him reaching into the Human World he was quickly destroyed at the hands of Shoutmon X7 Superior Mode.

Despite his apparent destruction Bagra was reincarnated as an elderly human-looking man (known as the Old Clock Shop Man) and realized the wrongs he committed in his previous existence as a fraction of his discarded powers manifested as Quartzmon and the DigiQuartz. Creating the identity of a clock shop owner Bagra recruited aspiring humans called Digimon Hunters to find one worthy of using the Astral Snatcher, his original self's skeletal arm which was only thing that could destroy Quartzmon. He also enlisted the aid of the DigiDestined, Digimon Tamers, Legendary Warriors and Digimon Data Squad to team up with the United Army in holding off Quartzmon until the Brave Snatcher's user was chosen.

Bagramon, or Lord Bagra's full appearance in the show. 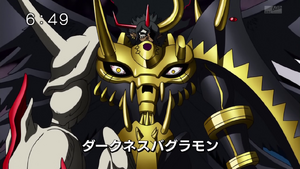 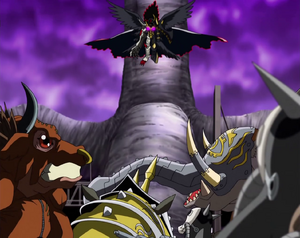 Bagra's remaining troops looking up in fear as he prepares to strike. 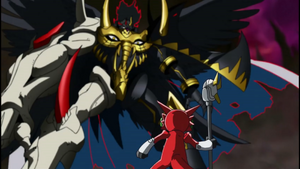