Head of the Capulet family

Trying to increase his family's wealth.

Force Juliet to marry Paris and reap the rewards (failed).

Lord Fulgencio Capulet, better known as Lord Capulet or also simply known as Capulet, is the main antagonist in the Shakespeare play Romeo and Juliet, taking the place of the notorious rival Tybalt after the latter's death.

Lord Capulet is the patriarch of the Capulet family - one of the two most powerful families in Verona, rivaling the Montague family. He was an ambitious and self-centered social climber who was hell-bent on becoming richer - in spite of the fact that he was already extremely wealthy.

His plan throughout the course of the play was to coerce Juliet into marrying Paris - an extremely popular and resourceful aristocrat. He wants this because when two people are married, they and their families have access and right to any money and any property that either of them has.

Initially, however, Lord Capulet is presented as a kind-hearted and sensible character. When the ambitious Paris asks to marry Juliet in the beginning, Lord Capulet says she's much too young, and alludes to his guilt about marrying his own wife when she had been too young. The lord eventually relents and tells Paris he can attempt to charm Juliet, but it is ultimately her choice that matters.

Lord Capulet holds a party at the commencement of the play to give Paris a chance to woo Juliet. During this event, Lord Capulet was unusually ignorant to any problems at his party that would ruin his plans. This is shown when Romeo and his friends enter the party under false invitations, and Lord Capulet prevents Tybalt - his fiery and aggressive nephew - from fighting Romeo because it would damage Capulet's reputation in front of his guests.

When Tybalt refuses this demand, Lord Capulet turns to violence and turns his nephew away. This makes him partly responsible to Romeo and Juliet's romance, since if he had allowed Tybalt to fight Romeo, then Juliet and Romeo would never have met in the first place.

Later on in the play, posterior to Tybalt's death, which deeply hurts the Capulet family, Lord Capulet decides to disregard Juliet's feelings and easily manipulates Paris into quickening the marriage to that very week. However, when Juliet politely refuses to marry Paris, Lord Capulet flies into a violent rage - his Villainous Breakdown. He attacks Juliet and his wife, threatening to throw Juliet on the streets if she didn't marry Paris. This provokes Juliet into the plan to fake her death, which eventually leads to her actual death.

When Capulet realizes that Juliet and Romeo both died as a result of all this, he somberly reforms, offering to end the feud with the Montagues.

Lord Capulet appeared, in public eyes, to be benevolent, wealthy, wise and grandfatherly. However, his true nature was another matter entirely. He was an extremely ambitious megalomaniac who sought nothing more than to climb further up the social ladder. He was extremely narcissistic and arrogant, only thinking for himself and nobody else. Capulet was also highly intelligent, cunning and manipulative, able to manipulate situations to his own advantage with skillful ease. These traits make Lord Capulet a sociopath of the most horrific kind. Like most sociopaths, he was normally unbreakably calm and reserved in nature, but was capable of flying into intense outbursts of rage when he does not get his way - shown twice throughout the play.

Capulet in the 1968 film adaption 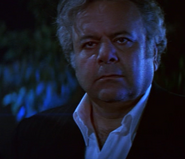 Capulet in the 1996 film adaption 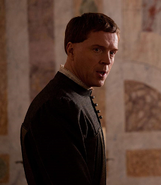 Capulet in the 2013 film adaption