Lord Cob, or simply known as Cob, is the main antagonist of the 2006 Studio Ghibli film Tales from Earthsea.

He was voiced by Willem Dafoe in the English dub, who also played Raven Shaddock in Streets of Fire, Eric Masters in To Live and Die in L.A., John Geiger in Speed 2: Cruise Control, Max Schreck in Shadow of the Vampire, the Green Goblin in Sam Raimi's Spider-Man trilogy and Spider-Man: No Way Home, Armando Barillo in Once Upon a Time in Mexico, Nikolai Diavolo in James Bond 007: Everything or Nothing, George Deckert in xXx: State of the Union, Rat in Fantastic Mr. Fox, J.G. Jopling in The Grand Budapest Hotel, Jack Lassen in The Simpsons, Ryuk in Netflix's Death Note, Thomas Wake in The Lighthouse and Clement Hoately in Nightmare Alley.

In the Japanese version, he was voiced by Yuko Tanaka, who also played Lady Eboshi in Princess Mononoke.

Lord Cob was once a skilled but dark wizard banished to the Dry Lands by Sparrowhawk for controlling the dead so he could become the Archmage wizard himself. In order to survive, Cob built a fortress entirely made out of dragon bones. After spending years of studying black magic, he planned on opening the door between life and death to gain eternal life by upsetting the world's balance.

Cob became the ruler of Hort Town, a town filled with slave traders and merchants who scam people.

Cob first debuted after his second in command, Hare, reported to him about a group of slaves that escaped from a caravan. Dissatisfied, Cob nearly killed Hare until he revealed to him that it was a man with a scar on his face who freed them. Cob recognized the man as Sparrowhawk accompanied by Prince Arren of Enlad, who ran away for killing his father, the king. Ever since then, he spied on Arren to learn more about him.

Later in the movie, Cob ordered his men to kidnap Sparrowhawk's friend, Tenar, as bait to lure him and to tie up Therru to force her to tell Sparrowhawk about her capture. Cob soon discovered that Arren was being followed by a copy of him. After Arren passed out in a marsh pit, Cob appeared to take him to his castle before he threatened his dopple to leave.

As Arren awoken, Cob appeared beside him and offered him a potion to drink from that put him under his control. Cob told Arren that Sparrowhawk is using him to help find the secret of eternal life and killing him, with fake promises and fake kindness, Cob forces Arren to reveal his true name to him, Lebannen.

Sparrowhawk, who received word from Therru, made his way to Cob's castle, where the two wizards encountered each other. As they faced, Sparrowhawk discovered Cob's plan is to upset the balance in order to open the door between life and death. Sparrowhawk warned Cob that opening the door is forbidden, but Cob states that he is beyond nature. He then revealed Arren to Sparrowhawk who assaulted him. Arren tried to kill Sparrowhawk while under Cob's control, but Sparrowhawk freed him of it. He then comforted Arren by telling him that death is a precious gift, as he believed that Arren was afraid of dying. However, Sparrowhawk then became weak for being at Cob's castle, allowing Hare to capture him and throw him in the same dungeon where Tenar was in.

Therru, now freed, ran into Arren's copy, believing it was him. He led to her Cob's castle and stopped there as he could not go further. He revealed to Therru that he is actually the light within Arren looking for its owner due to the world's imbalance. However, he promised to accompany her by revealing his true name to her before disappearing. After that, Therru sneaked inside the castle where she overheard Hare's discussion about Tenar and Sparrowhawk's execution. She later found Arren who was ashamed about what he has done.

She bestowed his sword to him, but he could not take it as he claimed that he is not worthy of it. After being denied, Therru revealed to Arren that he is actually afraid of life, not death, as she revealed his true name to him. Curious about hearing his true name, Arren asked Therru how she knows of it. Therru replied that he told it to her, which she then revealed her true name, Tehanu, to him, giving him hope.

As they ran outside, Cob was seen on top of a tower before sunrise where he and his men were about to push Sparrowhawk and Tenar to their deaths until Arren and Therru arrived. Arren scared away Hare and the slavers after he easily defeated them with his sword. As Arren confronted Cob, Cob was disappointed to see Arren against him and used one of his spells to kill him, but Arren was able to stop him by unleashing his sword to slice off his hand.

The action deprived Cob off his magic, aging him into an old man. Cob reattached his hand and then grabbed Therru, forcing Arren to follow him. As Cob was seen walking a long flight of stairs, he ordered the stones below him to forbid, thus slowing down Arren for his escape. Arren reconciled with Cob and Therru on top of the highest tower, where Cob held Therru in a choking grip as he revealed to Arren that death is terrifying, admitting his fear to it.

Arren tried to reason with Cob by telling him what he has learned about death, but Cob refused to believe in him and instead expanded his arm, which seemingly killed Therru. Cob then walked away while the sun was rising, but Therru stopped him as she was revealed to be alive. As Therru stood before him, she said, "Shadow return to darkness," before turning into a dragon that started to inhale fire, causing Cob to burn and fall to his death.

Lord Cob has the appearance of a woman, making him look androgynous. He is something of a bishonen, leaning heavily towards the effeminate side in his appearance and attire but having a voice and pronouns that are clearly male. He appears as an incredibly beautiful, svelte, gracile, and curvaceous figure who may be mistaken for a woman until he speaks. His face is extremely soft and feminine in it's features. He has dark blue straight long hair as well as violet eyes with small patterns underneath both of them (like tears or small thin triangles). His skin color is very pale, almost white, and he wears a long purple tunic throughout most of the film. His voice is soothing, soft and whispering to the extent it can make others fall asleep, yet clearly masculine. However, when the battle commenced, Arren cut his hand off with his father's sword. Because of this, his true appearance was revealed: he had been old all along but disguised by magic. After a while, his eyes turned black as he attempts to kill Therru.

Cob is a very undemonstrative, unmerciful, and cruel individual, involved in the slave trade. He can be described as unfeeling and even malicious. He desires to be Archmage, and is nearly as powerful as Sparrowhawk but is obsessed with finding how to live forever. He has a hold over Arren (Lebannen) to keep him under control because he believes that he has a clue to living forever and be usefull for killing Sparrowhawk. His hypocrisy lies in his value for his own life, absolute fear of and refusal to accept his own death which is at odds with his lack of value in the lives of others around him and subsequent willingness to kill.

Lord Cob has the ability to turn his body into a black liquid state. Cob also has the power to infiltrate people's dream and make people weak or die, as he tried that on Sparrowhawk and Arren. Whenever his limb is cut off, Cob could easily reattach it to himself. He can summon heart of his victims for killing them. Cob is charismatic and has no difficult for pushing people to reveal their true name. 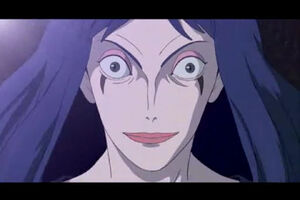 Cob takes Arren with him. 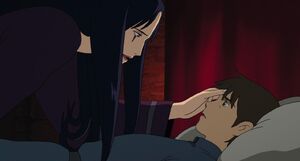 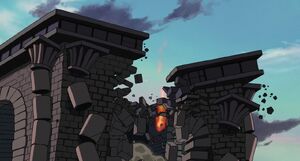