As the second-in-command of the X-Nauts, Lord Crump is always willing to follow Grodus' command, and as such, is one of Mario's most persistent foes in his quest to find the Crystal Stars, being fought four different times throughout the entire game (in the battle tutorial, Chapter 2, Chapter 5 and Chapter 7). Lord Crump also plays a significant role in many of the cutscenes seen throughout the game. After his Magnus von Grapple 2.0 is destroyed, he is sent flying into space. He managed to return from space and now hangs around with Grodus and what's left of the X-Nauts in Poshley Heights.

As Mario makes it to Rogueport, he sees Lord Crump and his men confronting and questioning Goombella about what she knows on the Crystal Stars. Goombella refuses to tell him anything and notices Mario, so she quickly gets behind him as if he would protect her. Lord Crump sees him as a threat and fights him in a tutorial battle. After the defeat of Crump, he sends in a mob of X-Nauts to attack Mario, but in the confusion, they escape, much to Crump's chagrin.

In Chapter 2 of the game, Grodus sends him and the Shadow Sirens to Boggly Woods knowing a Crystal Star was there located somewhere within the Great Tree. Knowing the Crystal Star belonged to the Punies in the tree, Crump and his men imprisoned them. He also teamed up with the Punies' enemies, the Jabbies, and performed a search throughout the tree. Their search for the Star didn't go exactly as planned though, thanks to Mario, Goombella, Koops, Flurrie and Punio interfering by liberating the Punies and fighting the Jabbies in a battle for the tree. After Mario, Goombella, Koops, Flurrie and the Punies found the Emerald Star, Crump steals it and activates a 5-minute self-destruct mechanism. As Mario and company reach the entrance to the tree, they see that the Puni Elder blocked off Crump's escape, giving them the opportunity to force Crump to surrender. Crump was surrounded, so he activated his Magnus Von Grapple in a last attempt to beat Mario and make a getaway. But as usual, he and his robot were beaten. Upon the defeat of Magnus Von Grapple, Lord Crump and his men were driven out of the Great Tree, and the Puni Elder gave Mario and his team the Emerald Star as a reward.

In Chapter 5, Lord Crump disguises himself as a pirate named Four-Eyes and follows Mario and company to Keelhaul Key to find the Sapphire Star. His disguise is very poor, and Crump even comments "You in front of the TV. Yeah, I'm talking to YOU! It may be pretty obvious that you know who I really am, but don't tell Mario or else!". He secretly follows Mario and company through the Pirate's Grotto as Mario and company search for the Star. After Mario and his friends beat Cortez and obtain the Star, Lord Crump removes his disguise and threatens to blow Keelhaul Key to the bottom of the sea unless Mario gives him the Sapphire Star. Mario, Flavio (a rich and enthusiastic pirate) and company enlist Cortez's help to fight Crump. While Cortez's pirates (with help from Mario and Flavio's deckhands and Francesca and Frankie) and Crump's X-Nauts raid each others' ships, Mario and Co. jump aboard Crump's ship and begin their battle. This time, Crump's got his X-Nauts as backup, using them to restore his health and pile up as a big ball to roll over Mario. Lord Crump and his X-Nauts lose and leave in shame.

It was not long after that Lord Crump went to Twilight Town in search of the Superbombomb. He manages to find it and gloats over how it will help him with the search for the Crystal Stars. Unfortunately, Bowser and Kammy Koopa were around and overheard him talking about finding something amazing. This resulted in a back and forth quarrel until Crump got annoyed and called his men which Bowser and Kammy responded to by calling their Koopa Troop. Seeing the situation was getting out of hand, Crump decides to use the Superbombomb. After throwing it though, the bomb does not go off and lands off the ground. Seeing this, Bowser gloats and shows off his fire breath power, but accidently sets off the bomb by igniting it, exploding and wiping out the two armies.

Lord Crump reappeared at the end of the X-Nauts base where he attacked Mario and friends in his new Magnus von Grapple 2.0 which had at least a dozen new abilities. Mario managed to defeat Crump narrowly and he was blasted into space.

Later, Grodus reveals that the results of the battle were irrelevant for his plans, and admits that he tricked Lord Crump.

During the ending, it was revealed that Lord Crump somehow survived after his defeat. He was last seen in Poshley Heights, along with Grodus (who was reduced to a head), and four X-Naut troopers. As with Beldam, Marilyn and Doopliss, Lord Crump and the X-Nauts ended up changing their evil ways. 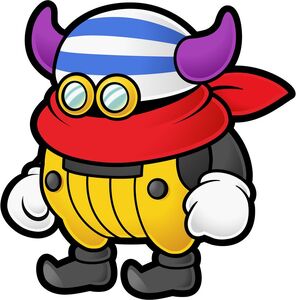 Lord Crump in his "Four-Eyes" disguise. 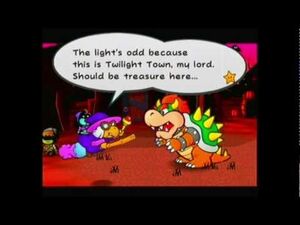