Sending his allies to attack the schools and bring the codex to him.

Become the most powerful being in the magical universe (failed).

In the 4Kids version, his backstory has him as a man named Argulus who sought to control the shadow fire of Shadowhaunt and merged with it to become Lord Darkar. Also, in 4Kids, his name is known in the first episode of Season 2, while in the RAI version, his name is not mentioned until the season's seventh episode, when Faragonda deduces his identity.

In Season 2, he planned to obtain the Ultimate Power of the Realix. However, the portal to the Realix realm can only be opened by the four pieces of the Codex (One in each of the schools (Red Fountain, Alfea, Cloud Tower and in the Pixie Village). He held the pixies hostage to get them to reveal the location of the Pixie Village, but they refused. The princess of Andros, Aisha, despite her best efforts, could not save them, and was defeated by Darkar. She then got the Winx Club's help when they rescued her. Unfortunately, Darkar also got help from the Trix. He released the Trix from Lightrock Monastery (Roccaluce) to assist him in his quest and gave them Gloomix power.

When Bloom, Stella, Aisha, Sky and Brandon made their way to Darkar's castle to rescue the pixies, Darkar sent shadow monsters after them, who sent Brandon and Stella falling into a river thus separating them from the others. When Stella returned and killed the shadow monsters, Darkar was furious and caused an earthquake, forcing Bloom, Stella, Aisha, and Sky to retreat. However, they later found their way to Darkar's castle. After turning into a snake to interrogate the pixies, Darkar realized they would never tell him where Pixie Village was, so he secretly released them hoping that they would lead him there. He also created a clone of Avalon, whom he imprisoned in his dungeon, and had him fight the Trix off to gain the Winx's trust.

After being informed by his bat-like servant Kerborg, that the Codex was in four pieces, and where the other three were, Darkar set his sights on the Codex of Red Fountain. He transformed Kerborg into a monster as a distraction so the Trix could steal the Codex, but they were unable to do so, and the specialists defeated Kerborg. When the state of alert at Red Fountain was lowered, the Trix tried to steal the Codex again, and this time were successful.

Then Darkar took another shot at the Pixie Village codex when the false Avalon cast a homesickness spell on the pixies so they would return to Pixie Village, during which Darkar sent two shadow monsters, one of which was Multi-Mouth Monster, to follow them. When the Winx (minus Bloom, who was researching a counterspell) tracked the pixies down, Stella killed the two monsters, but Multi-Mouth Monster exploded into slime all over the Winx, preventing them from flying. When Bloom arrived, it became a race between her and Darkar as to whether she would reach the pixies before they reached Pixie Village. In the end, Bloom removed the homesickness spell in time, and Darkar was forced to accept defeat for the time being.

A while later, Darkar sent the Trix to steal the Codex of Cloud Tower, and they were successful. To get Alfea's Codex, he made the false Avalon, who was teaching at Alfea, put a shadow virus on Bloom to turn her into Dark Bloom. Darkar then used her as his puppet to get the Alfea's part of the Codex. Then the false Avalon faked illness so Livy would go to Pixie Village for the antidote, and Darkar sent Icy to follow her to Pixie Village and get the final piece of the Codex. Icy succeeded with the help of her two sisters: Darcy and Stormy.

With all four pieces of the Codex, Darkar attempted to open the gate to Realix, but was unsuccessful, as opening the portal requires both light and darkness, so he needed Bloom and her Dragon Flame for the light to counter his power of darkness. Darkar sent the Trix to capture Bloom, but they were unsuccessful, so Darkar ordered Avalon's shadow clone to abduct Bloom, though the real Avalon escaped his dungeon shortly before. Darkar transformed Bloom into Dark Bloom again, which made the Trix jealous. When the other Winx and the specialists went to his castle to rescue Bloom, Darkar ordered the Trix to give their Gloomix to the monsters to give them a chance (this was later countered by the Winx).

The Trix confronted Darkar, saying they did all the work for him. Darkar confirmed their suspicions that they had only been his pawns and were useless to him now that he had the Codex and Bloom, and he banished them to the Dark Void: Oblivion. He turned Kerborg into a monster to guard the portal while he and Dark Bloom opened it and entered Realix. While the others were held up fighting shadow monsters, and Faragonda, Griffin, and Codatorta killed Kerborg, Stella and Aisha entered Realix to face Darkar, since Stella's light magic was most effective against Darkar and Aisha had fought him before.

While Dark Bloom chanted an incantation to awaken the Ultimate Power, Darkar fought Stella and Aisha as a distraction. Stella and Aisha used Convergence and seemingly destroyed Darkar, but he survived and trapped them in dark slime. Then the other Winx and the specialists arrived, but Darkar gained the upper hand on them. When he directed a lethal magic attack at Musa, Riven took the hit for her. Then the Trix escaped from Oblivion, fused into one body, and fought Darkar over the ultimate power. At first, the Trix had the advantage, but then they attempted to take the Ultimate Power, Darkar blasted them in the back and knocked them out.

When Dark Bloom awakened the Ultimate Power, Darkar transformed into the Shadow Phoenix and began absorbing the Ultimate Power. However, Sky told Bloom that he loved her, and the love for him in her heart caused her to use her healing power on herself and the others, returning to her original self while destroying the Ultimate Power. Darkar attempted to kill everyone for foiling his plans, but Faragonda and Griffin projected a shield around them, and together, all six of the Winx used a Charmix Convergence to destroy Darkar once and for all.

His Castle collapsed after he was destroyed, probably because it was his Evil powers which maintained in it. Presumably all of his shadow monsters, including the Avalon clone, were destroyed as well.

It can, however, be questioned whether Lord Darkar is really dead or not since, in the second episode of Season 2, Professor Wizgiz said that everything needs to have an equal opposite to continue existing and to maintain the balance of the Universe and that a power's opposite is automatically created along with itself.

This means that the Shadow Phoenix and the Great Dragon were born at the same time and that they also need each other to counter each other's powers and maintain the balance of the Universe. It could be that his power or his essence still exists in a disembodied form, maintaining the balance of the Magic Dimension by countering the power of the Dragon Fire (similar to the Great Dragon: while the Dragon itself no longer exists, its power still exists in the disembodied form of the Dragon Flame which has been passed down through generations of the Royal Family of Domino; also, when Valtor is destroyed in the 4Kids version, Faragonda says his essence is sealed in the dark dimension, meaning his power was not destroyed even though he was). This could mean that after his death, Darkar's disembodied power is sealed in Oblivion while maintaining the balance.

Darkar does not physically appear in Seasons 3 and 4 due to his death in Season 2, but is mentioned a few times, the first of which a flashback is shown in which his tails and wings are visible. In Season 4, pictures of all the enemies of the magic dimension are seen on a wall, including Darkar.

Darkar is quite cruel, sadistic, destructive, uncompromising, treacherous, perverted, violent and psychopathic, and he is strongly implied to have killed several pixies while interrogating them and refused Shadow Avalon's request to have the real Avalon killed because he wanted him to live a long life of suffering. Despite his rage at Stella making sport of his minions, Darkar cares very little about his followers, as he was only using the Trix to get the Ultimate Power, and banished them when they were of no more use to him. Unlike other Winx villains, he rarely does anything himself, as after releasing the Trix he has them, Kerborg, Shadow Avalon, and his monsters do all the dirty work for him until he turns Bloom evil and enters Realix. He is also quite cunning, arrogant, manipulative, and egotistical, as he did not believe the Winx to be a threat and did not mind them learning new magic from Shadow Avalon, when in the end they were the ones who destroyed him.

Lord Darkar is the polar opposite of the Dragon Flame, and almost equally as powerful. While the Great Dragon is a source of light, life and energy, Lord Darkar absorbs it, thus creating an opposite essence of the Dragon Flame and is a source of negative energy. He is capable of creating his own army of shadow monsters and even shadow clones of people like he does with Avalon. He also turned Bloom into Dark Bloom by using his dark magic/energy. He can fire powerful dark energy beams and create energy shields, and energy bubbles to confine the pixies. Darkar also has demonstrated the power to summon, create, control and/or manipulate darkness and/or shadows to his own whim and desire, and the power to transform into a giant phoenix-like creature as well as disguise himself. In addition to his magic powers, he has long razor-sharp claws. 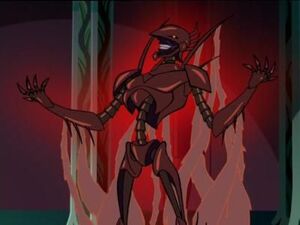 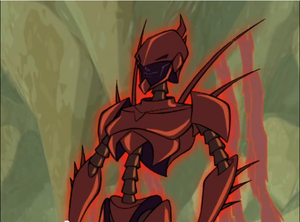 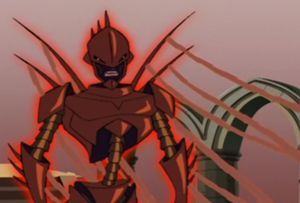 Lord Darkar mocking the Winx while fighting them in the Relix Dimension. 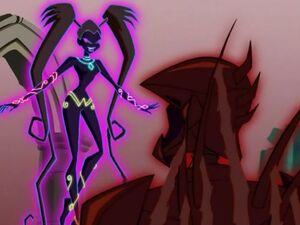 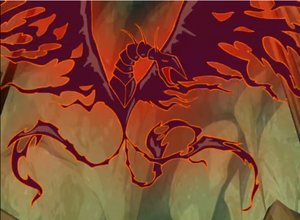 Lord Darkar in his phoenix's form