Taking care of his cat.

Commit genocide on the Coordinators.

He was voiced by Hideyuki Hori in the original Japanese version, and by Alistair Abell in the English dub.

Djibril was the leader of LOGOS, who was the successor of Blue Cosmos leader Muruta Azrael. He first appeared after the fall of Junius Seven on Earth, where he was at a meeting with other officials, he believes that PLANTS , a group of space colonies formed by coordinators is to blame, and should be all exterminated, which is agreed by Logos.

Djibril then learn that ZAFT was developing Gundam in their base. Which cause the Federation to agree that Djibril could lanch nuclear missiles to PLANTS, however, PLANTS used a weapon called Neutron Stampeder to detonate the nuclear missiles when they were still in the fleet, which reduced them into scrap metal, much to Djibril's rage.

Throughout the war, Djibril stayed in a underground base under his mansion, watching the events with other Logos officials.

When Logos's new weapon, Destroy Gundam, piloted by Stella Luossier destroyed three city in western Eurasia, Djibril announced to other Logos officials that naturals and coordinators could never live together in peace and anyone who neglect this will "get a one-way ticket to hell". However, the Destroy Gundam was stopped by Kira Yamato in his Freedom Gundam.

Soon, Gilbert exposed Djibril's crimes to the public, as a result. He, together with Logos and Blue Cosmos, were abandoned and wanted by Earth Alliance. Djibril first hid in a base in Iceland, but with the combined force of ZAFT and Earth Alliance, the defense of the base was quickly overwhelmed. And Djibril fleed to Heaven's base and abandoned other Logos member and his cat. Djibril then fleed to Orb, where Seiran's family sheltered him and provided him a space shuttle. However, the base was attacked by ZAFT and Orb force lead by Cagalli. And the Seiran's family perished in the process. As of Djibril and Blue Cosmos loyalist, they fleed to space and went to Daedalus Base on the moon.  He then watched Lacus exposing Gilbert for using Meer as a second Lacus, much to Djibril's joy. However, Lacus said she doesn't support Blue Cosmos either.

Djibril then tried to use Requiem, a weapon to completely destroy PLANTs headquarter, where Gilbert was located. However, it was disrupted by Yzak Joule, thus causing Requiem to miss and hit other PLANTs colony instead, however it lead to a chain reaction that lead to three colonies' destruction. Then, the Daelalus base was attacked by Minerva, and Djibril attempted to flee in his Girty Lue space shuttle again, however, Rey Za Buurel in his Legend Gundam noticed this and attacked Girty Lue with a direct strike to the bridge, and Djibril was hit by the beam directly, vaporizing him.

Djibril, just like Muruta Azrael, has a deep hatred towards Coordinators and wants to wipe them out. He is spiteful, and he never gives up on his plans. Djibril is usually very calm, but when his plan is foiled, he will rage easily. He will also often flee when his base is under attack. However, unlike Muruta, Djibril is far from charismatic and frequently act on impulse, such as sending the Destroy Gundam to rampage on countries that refused to kill coordinators and frequently using mass destructive weapons against enemies. Overall, Djibril is a low-functioning psychopath that act without thinking about the consequence. 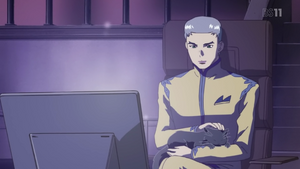 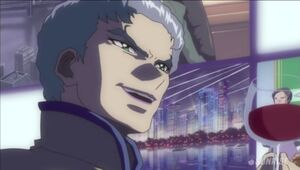 "For the preservation of our blue and pure world!" 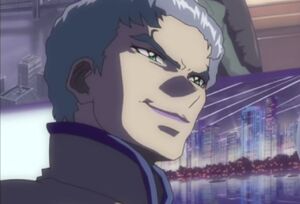 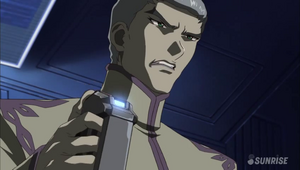 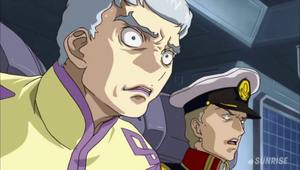 Djibril watch in horror as the Legend Gundam is ready to strike. 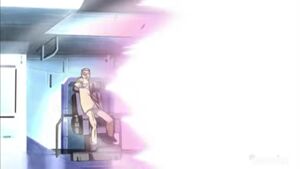 Djibril shortly before being vaporized. 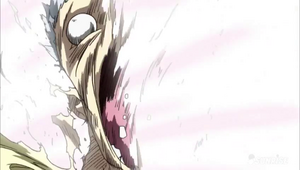 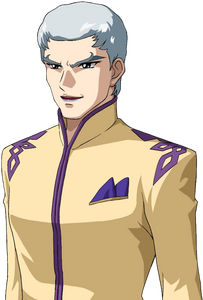 Djibril in Super Robot Wars
Add a photo to this gallery

Retrieved from "https://villains.fandom.com/wiki/Lord_Djibril?oldid=4054736"
Community content is available under CC-BY-SA unless otherwise noted.