Lord Dominator, The Greater Hater, D, The greatest in the galaxy

Become the greatest in the galaxy (succeeded)
Kill Lord Hater, Wander, Sylvia and Peepers
Destroy the galaxy and possibly the entire universe.

Lord Dominator is the main antagonist of Wander Over Yonders second season, replacing Lord Hater. She is an evil tyrant who is currently the most notorious villain in the galaxy at the top of the Galactic Villain Leaderboard.

She is voiced by Fred Tatasciore when she is disguised and Noel Wells in her true form.

While disguised as a man, Dominator is an intimidating figure that is dreaded in the galaxy not only for her army and power, but because she managed to become the greatest villain in the galaxy in record time.

When she's not disguised, however, Dominator seems to be a highly upbeat and energetic girl, declaring what happened with her enemies as "awesome" during the Season 2 trailer. She also seems to have an odd sense of humor, since she thought Wander, Sylvia, Hater and Peepers going "Who was that guy?" was amusing. She seems to be a fangirl of everything evil, often getting overexcited about doing evil things and which destructive weapons to use. Because of this, she behaves like a gleeful teenage girl in private and seems to enjoy talking to herself about her evil exploits. Recently, however, and unlike Hater, she has been shown to be even more heartless and cold than previously imagined, even willing to destroy the entire galaxy instead of enslaving it, simply for her own amusement. Adding to her villainous nature, friendship is a foreign concept to her, believing it to be another word for subservience.

Lord Dominator is described as be Lord Hater's nemesis. According to the series' creator, the villain is a "bigger hater than Hater". This likely indicates that she is worse and far more evil than Hater himself. Her actions support this assessment; indeed, the threat she represents is so dire that even the other villains of the series come to dread her. Despite her ruthlessness, however, she behaves somewhat childishly at times, and at several points it seems the harm she does serves no grander purpose beyond her own amusement.

She made her full appearance in the Season 2 premiere, The Greater Hater as the main antagonist of the episode and the whole season. Lord Dominator uses her army of robot minions to deal with Wander, Sylvia, Lord Hater, and Commander Peepers when they all infiltrate her ship. Wander persistently tries to bestow Lord Dominator with a picnic basket as an act of generosity, but Dominator does not bother paying attention to him, until Wander starts getting fed up and then plays his signature banjo. Only then, does Dominator attack him by encasing him in iron. Once Lord Hater finds out about her defeating Wander, he gets furious and attacks her, but Lord Dominator retaliates by stopping Hater in his tracks with her gloves and brushing Peepers aside. Wander, Sylvia, Lord Hater, and Peepers all escape the ship amidst the smothering damage, but all were shocked over how powerful "he" is, as they did not know who Lord Dominator truly is at the time. Lord Dominator then morphs back into her true form out of excitement after her encounter with the gang. She is a girl the whole time, wearing a clad of intimidating and masculine armor. She then believes that she will have some "fun" with the gang, as she reverts back to her intimidating form, laughing maniacally.

She would then appear again in The Battle Royale. When Wander finds out about her true identity, he is determined to play matchmaker to set Lord Dominator up with Lord Hater, despite the sheer resentment Hater has towards Dominator. She finds out about the ring and then assumes her intimidating form to storm the warzone between all the other villains of the show by 1-upping them in one single blow in order to get a ring, which all the other villains had thought it was a powerful source for conquering the universe. Lord Hater then battles Lord Dominator for the ring after all the other villains declare Dominator the best villain. Hater knocks Dominator's helmet off, revealing her true identity to everyone else, much to the surprise of Sylvia and Peepers. Hater has developed a new crush after seeing her, in which Lord Dominator takes advantage of this distraction by sending him off the cliff and then taking the ring for herself.

In The Bot, it is established that Lord Dominator needs an important resource for her ship called "Volcanium X". She is shown to be outright cruel to her minions if they fail her, as shown with Bot 42. She takes a preference to Bot 13, since it actually did his job locating planets with Volcanium X. Dominator orders him to retrieve that resource. However, Bot 13 forms a newfound friendship with Wander and directly disobeys her by deleting his data. This infuriates Dominator, who then kicks Bot 13 out of her ship, resulting in him disintegrating to his death.

She appears again in The Rival, where she is visited by Emperor Awesome, who attempted to impress her with his muscles instead of a super weapon that he promised her. Dominator steadily encases him by pretending to be impressed with him, and then bluntly lets Awesome down for trying to suck up to her, while proclaiming that even Lord Hater isn't as delusional. She destroys Awesome's car at the end of the episode and later imprisons him, as shown in My Fair Hatey.

Her next major role is in My Fair Hatey, where she "invites" Lord Hater to her ship. Wander tags along with Hater to try to impress Dominator through the musical number "You're the Greatest", but it turns out that it was her armor sitting on her throne while the real Dominator was in the shower. Upon returning, it was revealed that the real reason that Dominator invited Hater to her ship is that he is the only villain who hasn't surrendered to her and wants him to admit that she is the greatest in the galaxy. It is shown that Dominator had imprisoned all the other villains of the show, including Dr. Screwball Jones, Little Bits, and Emperor Awesome. Dominator then makes it clear to both Wander and Hater that she is not interested in their friendship and relationship respectively, while singing her Villain Song "I'm The Bad Guy". She finally breaks Hater through this process, as well as Wander by smashing his banjo, and then throws both him and Hater into their prison. During that time, Sylvia and Commander Peepers attempted to destroy her ship's core with the Frostonium, which leaves Dominator desperate to fix her freezing ship once they successfully do so. Sylvia and Peepers manage to escape her ship along with Wander and Hater when they break out of their prison. Unfortunately, this ends up not only failing to destroy her ship, but also giving Lord Dominator ice powers, and she ends the episode going after them, telling them that the show is over. 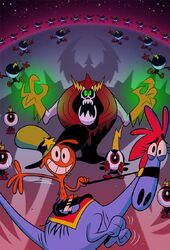 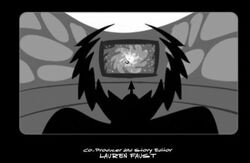 Appearance in Season 1 finale credits
Add a photo to this gallery
Retrieved from "https://villains.fandom.com/wiki/Lord_Dominator?oldid=1483754"
Community content is available under CC-BY-SA unless otherwise noted.