Deceived the people of the planet

Lord Dregg is the main antagonist in the last 2 seasons 9 and 10 of TMNT 1987.  He is an evil alien overlord and is treated more serious than the Shredder and Krang. He commands a large army of aliens. Dregg met the Turtles when he and his gang broke into the Federal Reserve Bank to steal the world's gold. The Turtles, however, foiled Dregg's plan thanks to their new friend Carter.

Dregg later manipulated the people of Earth into thinking that he was their savior so that he could rule the planet. He transformed dirty water into clean water to gain their blind trust. However, it was a machine that cleansed the water, not Dregg. The people built a tower in his honor. The Turtles still didn't believe him and confronted him. They destroyed Dregg's tower and Dregg fled the scene.

In the 1987 TMNT series, he was voiced by the late Tony Jay, who also voiced Judge Claude Frollo, Shere Khan and Monsieur D'Arque.

In the 1987 Teenage Mutant Ninja Turtles series, Dregg has blue skin and glowing red eyes. His head towers past his forehead in a black brace. He wears a purple suit and cape with a red and orange striped outfit underneath. His eyes glow brighter when he is either delighted or rageful. 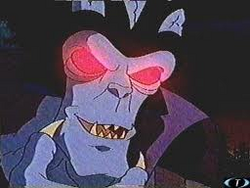 Retrieved from "https://villains.fandom.com/wiki/Lord_Dregg_(1987)?oldid=3568446"
Community content is available under CC-BY-SA unless otherwise noted.