Not to be confused with his younger self, Caliborn.

Leader of the Felt
Mirthful Messiah

Doom all timelines and ensure his own existence.

Lord English is the main antagonist of the webcomic Homestuck. He is an indestructible demon summoned at the end of the universe, although his time travel abilities allow him to appear prior to his actual summoning. He apparently cannot be destroyed by ordinary means, but only through the exploitation of a number of time-based glitches and loopholes.

Lord English is made up of the souls of Caliborn, half of Gamzee Makara, Equius Zahhak, and AR, though Caliborn seems to be the dominant personality.

Not much is known about Lord English. That small info is taken from the MSPA Wikia ITSELF due to English's mysterious nature and origin.

The Midnight Crew Intermission introduces English as the leader of The Felt.

When the Handmaid tries to escape from Doc Scratch's manor, Lord English intercepts her and takes her into his service.

At the end of the Trolls' Universe brought on by the death of Snowman, Lord English emerges from Doc Scratch and time travels back in time to begin his time on Alternia. In the past, he establishes The Felt and causes havoc on Alternia along with the Handmaid, causing him to be seen as a figure of death on Alternia. Interestingly, during English's summoning the parts of Scratch's genetic code that were written in the troll's Flarp rulebooks occur. The grandfather clock "t1CK"sand "t0ck"s. After which the "8r8k H34DS" occurs as Scratch's head breaks. Then English proceeds to "honk HONK".

Immediately after killing Hussie, English enters his sarcophagus and flies through the Furthest Ring. He lands inside a dream bubble containing the doomed timeline versions of the pre-scratch kids and post-scratch trolls. Using the White Wand, he conjures a beam of energy that bursts from his mouth, killing the doomed-timeline characters and destroying the bubble in an explosion visually reminiscent of shattering glass.

Gamzee then delivers his Lil Cal doll containing a different instance of Lord English to Jack Noir while in jail. Using Cal's body, English is able to possess Jack Noir when he looks at Cal, becoming "Lord Jack". Now in Jack's body, English fires a rainbow energy blast at Prospit's moon and destroys it. He then goes up to fight both Jane Crocker and Jake English. Before attacking them with a crowbar, Jade Harley interrupts the fight. She teleports him outside of the Alpha Session. Later, Dave Strider, Dirk Strider, and Terezi Pyrope are assigned to defeat him.

As English flies back to the session in Jack's body, he is spotted by Spades Slick. Spades Slick realizes it's English and charges at him for a chance at revenge for English's gang destroying his casino. English is charged by Slick until they bump into Dirk, Dave, and Terezi. Both Slick and English prepare to fight everyone.

Meanwhile, Lord English from the Trolls' Universe, after being led around the Furthest Ring and carving a path of shattered reality, goes into a dream bubble filled with members of Meenah's and Vriska's ghost army ready to fight him.

During the final battle of the Alpha Session, Lord Jack gets Dirk Strider into a choke-hold before Spades Slick gets Lord Jack in another choke-hold. Dave Strider than finishes them off by beheading all three while they are in a straight line. Lord Jack's head explodes sucking Gamzee Makara, Yaldabaoth, and most of LOTAK into it, teleporting all of them to post-scratch Earth in Universe C.

Lord English fights off the Ghost Army, killing them off one by one with little effort. Aradia Megido then freezes him in time, which gives the ghost an advantage at attacking him. When Lord English is able to move again, he is attacked by Davepetasprite^2 but manages to knock them down. Afterward, Vriska Serket opens a treasure chest which contains the juju to defeat Lord English. Lord English's fate is left ambiguous, however, it is presumed he is blasted by the juju into the black hole created by the destruction of the green sun.

Lord English is a brutish and blasphemous figure. He usually types in the Large font, all CAPS with perfect grammar. Uses felt color text, but may also use shifting colored text.

It is hinted that although English is an adult cherub physically, he may still be a child mentally. Andrew confirms this, saying that he used the dream self-game mechanic to dominate his sister in an unnatural way, meaning he was missing critical maturation from living with her. This unnatural predomination is actually why he lacks wings.

English owns a Cairo Overcoat that represents the space/time continuum and gets damaged when time-related things get out of hand. The Cairo Overcoat can turn into an Egyptian sarcophagus, which English can entomb himself in order to travel throughout time once inside a universe. More recently, English has been shown to have in his possession a golden scepter, atop of which is an orb, glowing with multiple colors, that possibly represents the Green Sun. This scepter seemingly demonstrates a more controlled form of Weapon/Object Duality, as it has been shown to morph into a golden assault rifle. Hussie met his end by this transforming scepter. He also possesses Calliope's wand, which, with the help of it, has used to destroy the dream bubbles, along with the many dead selves of all the Homestuck characters. 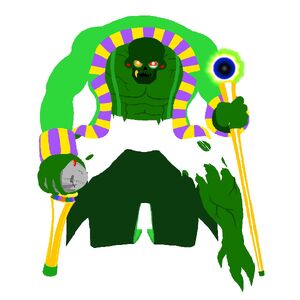 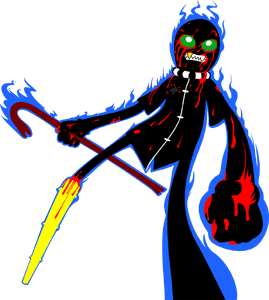 Union Jack, the Jack Noir Possesed by Lord English
Add a photo to this gallery 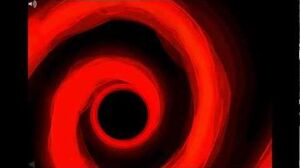 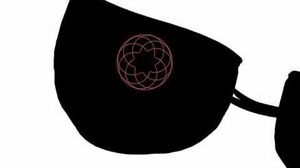 Homestuck Animation - A Lullaby for Gods 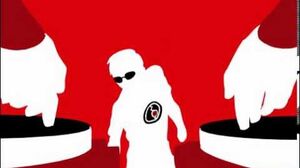 Mambostuck (Homestuck Animation)
Add a photo to this gallery
Retrieved from "https://villains.fandom.com/wiki/Lord_English?oldid=4123424"
Community content is available under CC-BY-SA unless otherwise noted.