Ruler and Creator of Gaia Cancers, Incarnation of darkness

Arrange the deaths of Lake Llandovery and Ewan Austin so that she and Vene II monopolize Seraphic Blue's power (succeeded), kill Vene II and the remainder of the party so she can assimilate the former (failed), Bring about Khaos and destroy humanity via Gaia Cancers (failed).

Er (Real name: Vene Ansbach) is the main antagonist and the final boss of the 2004 videogame, Seraphic Blue.

She is a terrifying dark entity who is the power behind Gaia Cancers, a monstrous race whose purpose is to wipe out humanity and destroy Gaia. She has also worshipped by Kursk Family as a goddess.

Er is a cruel, ruthless, merciless, manipulative and a nihilistic being who wants to destroy the world. She isn't above debasing and killing those who disobey her. The only time she shows politeness is when she tries to manipulate Vene into abandoning her mission to save the world so Er could destroy it, and even that is done in a mocking tone.

Er looks just like Vene and Ofa, but with magenta colored hair and tattered clothing. In her first form as the Death Seraph, she holds more of a statue or metallic like skin color. In her final state, she regains her normal form, but with wings.

Er was originally nothing more than a secondary personality that formed during Vene's conditioning to become Seraphic Blue; the Instrument of the world's salvation.

Er's existence was formed because of Siegbert's method of raising Vene to be the instrument of the world's salvation, to cut her ties emotionally to retain a clean slate to continue the mission, Vene created Er and used her as an outlet for her negative experiences. During her experiences, Vene tried to commit suicide from the stress, as a result Siegbert had to implement at the suggestion of his fellow staff a social development program to help recalibrate Vene's behavior. His son, Fritz took part in the program. It was after when Vene met Fritz and started to regain the ability to evoke emotion is when Er changed, after the program ended, Vene was depressed after being separated from Fritz. It was during an observation of Vene that she said the name of Er for the first time. When Siegbert confronted Vene, her behavior changed to a vile cold one, saying that Siegbert has no right to know who Er is.

Some time later, Siegbert found the answer that Er is Vene's evil half, which emerged from the conditioning to become Seraphic Blue. Er was in 2 stages, Prototype Er, and the current. Prototype Er was the violent side of Vene before the social development program and before Er was given a name. The current Er emerged from Vene's despair of being separated from Fritz, and her shutting off her emotions for the mission. Er wasn't entirely erased and was kept in case she were needed for something else. That something else was when Vene went into despair. The name Er is a pronounciation of R. That pronounciation was from a foreign language Siegbert was fond of and his preferences influenced Vene's during conditioning, the name R originates from Refuse. The manifestation of Vene's desire for refusal and negative emotions. Over time the relationship between the 2 changed. Vene had control over Er, but her negative emotions empowered Er, causing her to have the desire to control Vene. Er, being Vene's true nature. Siegbert wasn't going to stand by, should Er take control, all is lost, but sees it boring if Vene wins. He sees Er as his second daughter.

When Vene contracted tardive DSHIS (Defective Sera-Human Infant Syndrome) at age 17 and was transforming into a Lucifer, her body was put in containment at the Fezzite Garden, However Er still remained while a fragment of Vene's soul remained to stand guard over Er to prevent her from escaping while her soul was transferred to a cloned body. In her new body, Vene was speaking telepathically with another entity which was Ofa (The fragment of Vene's soul that remained in her original body, while she acted as a warden to keep Er under control and to buy Vene time to destroy Er.) Near the end of Year 56 of the Rio-Fezzite Calander, Siegbert discovers an entity inside Vene's original body, terrified he ran several other checks and the results were the same. His intuition said that Er wasn't entirely gone.

Two years before the story began is when Ewan rescued Vene and Siegbert's team was sent to the Fezzite Garden because Section SB (Seraphic Blue)'s role was relegated to monitoring the original body of Vene Ansbach I. It was there he made a startling discovery that one of the scans from another sample held a similarity to Er. That sample was a Gaia Cancer: An aberration in Gaia's Providence which slowly eats away and erodes Gaia's life.

Er wasn't impeded however by what happened, she was still connected to Vene and still fed off her negative emotions. Er is literally an antithesis of Seraphic Blue, an anti-element under Gaia's Providence. She made use of her power which mirror's Vene's to interfere with and intrude on Gaia's Providence, allowing her to become a living being in the embodiment of refusal, she became close to a Gaia Cancer in behavior and nature. What Er seeks is cessation of existence, leading to the alliance of herself, Ende, and the Kursk Family and their ends of the world's destruction.

During the events of game, Er masterminds the attacks and events on Gaia, while the protagonists mostly battle with Gaia Cancers and her acolytes throughout the game. She doesn't appear much, but occasionally seen talking to Ofa about destruction of Gaia.

At the climax of the game, Er is unsealed due to Ende's interference by forming a fissure due to him infusing a Gaia Cancer in Vene's original body during the time Vene and Ofa were to reunite. Er originally wasn't strong, so Vene made light of her strength. She then realized the potential of growth which would make her surpass Ende, in which he underestimated. Er is part of Vene, so as Vene gained power, so did Er, Vene gaining positive, Er gaining negative. Which is most likely the reason why the Kursk family didn't mention anything, but was most likely a part of the plan. Morgan and Georg were chosen, this meant a higher likelihood for Ewan and Lake to die, forcing them to merge with Vene to prevent Seraphic Blue from ceasing to exist; this in turn caused Er's power to become astronomical, all in preparation for the "Grand Role" the Kursk family had. Vene had an idea that what they had planned for Er. That Er is the "Symbol of Finality" and the "Paradox of Destiny" which is Vene's antithesis.

At the core of the Cradle of Souls where Er begins to stir, the Prophets of Gaia say that Er is feeding off of not only Vene's negativity, but the negativity of anyone who reaches out for death, the party separates into 2 groups, one to destroy the shell protecting Er while the other faces her. After the shell is defeated, Vene and Er speak to each other. Er saying the moment of truth has come and asks if the seraph who can't fly even with wings is able to save Gaia and asks to try and defeat her if she can. Vene says it's her job, responsibility and mission. That she was born for only that moment. Some time into the fight she admits her power isn't enough to get Vene to submit and then says she will go all out. After she takes enough damage, Er decides to end it once and for all, Vene then says she would rather choose her own wings than hers and follow her own destiny of saving the world and sacrifice herself if necessary,  then saying she will not accept any other path than that. Vene then uses the newfound power she gained of the Destined Wings and defeats Er with Seraphic Finale.

After Er is defeated, in the depths of Vene's spirit she congratulates Vene. Saying they reached the end of their destiny, that they can't turn back from where they are now, she then says the aura of her soul was much better before this, her unrestrained desires that shone in the darkness. She then asks Vene how she could break her true desires by her own hands and how could she destroy Er and the dreams of all those who seek nihility. Er then says Vene proven something to her, that she was able to unleash a power far greater than nature itself had, laying nihility to rest and bestowed salvation upon the world, completely unlike how she "saved" cats in front of Siegbert and Doris.

Er then asks Vene if she will deny it. Vene then replies by saying that had nothing to do with it. The mission was the only thing that mattered to her, she repeats her statement of her designation as Seraphic Blue, created specifically for that moment. All she cared about was Er's destruction and saving the world and all she did was to fulfill the hopes of those resting on her shoulders, she cared little of anything else. Er then sneers and says she wasted her last chance to reunite with Vene to have her true self realized. Vene calls that notion foolish and asks how will that bring herself salvation, she isn't needed as a person, they only needed her as Seraphic Blue. Vene then says people are nothing more than consumables in Gaia's Destiny, predestined to be cast aside once their usefullness is expended, and she says she is no different even with her designation, but only a consumable to save the world, after that she is a nobody. She then says that is why she hates her destiny and everything about life.

Er then snickers and says Vene does understand after all, those feelings represent her and because of those emotions, She was born. Er then says there is one difference between Vene and herself, Vene followed her destiny while Er refused it. Vene chose to live on while Er aimed to end the world. Er then calls Vene a pitiful existence; Hating her destiny, yet following it, she lost her whole identity. Er then calls Vene an angel who can't even fly. Vene calls Er a sore loser, and says no matter what Er says, she still lost. Vene saved the world and completed her mission without staining her reputation, that she is the winner. Er then wonders about that and asks what Vene plans on doing next, saying the battle and her destiny is over, but doesn't mean her life is over. She then asks if Vene will commit suicide via jumping down Moribund Hope or overdosing at Chaos. Vene then says she thought about that before and says death is the best way to save herself, the means matter little, to her ignorance, death, and bliss are all correlated.

Er then snickers again and Vene asks what is funny. Er says it's clear to her now. It will still be the same even if she is gone. The aura of Vene's soul then changes to darkness. Vene asks what is happening. Er then laughs maniacally before fading and says Vene has lost, the world slowly slipping and being consumed into Khaos. But in the end, with help from Lake, Ewan, and Fritz, Gaia's Rebirth is activated, thus ending the malevolent entity once and for all. 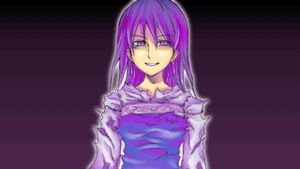 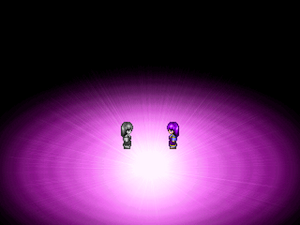 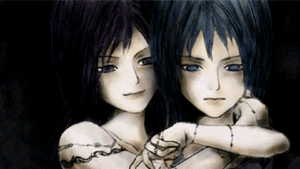 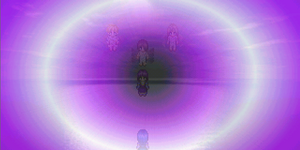 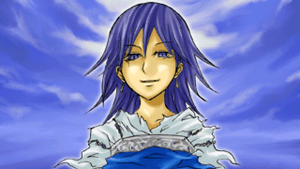 Er has come into reality and rising to power 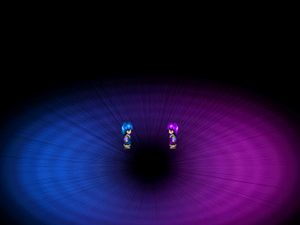 Vene and Er's encounter in the Cradle of Souls 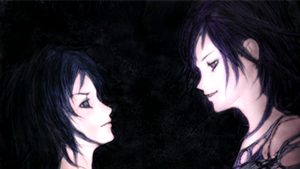 Vene and Er square off 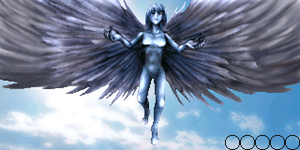 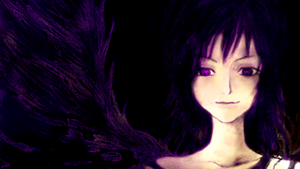 Er before her 2nd phase 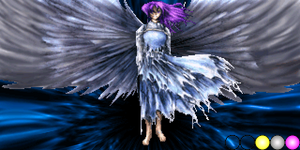 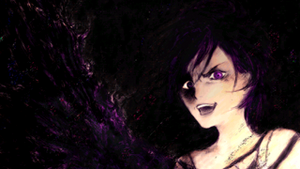 Er saying she will end the battle and destroy the world 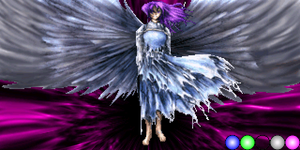 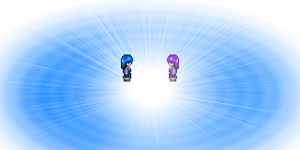 Er admitting she lost to Vene 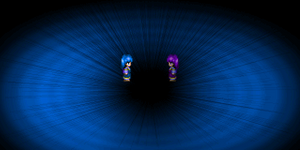 Retrieved from "https://villains.fandom.com/wiki/Lord_Er?oldid=3933377"
Community content is available under CC-BY-SA unless otherwise noted.