Trying to steal the Rock of Sages.

Take the Rock of Sages.

Villainous Magician
Lord Grudgemunger (simply known as Grudgemunger) is the main antagonist of the episode "Rock of Sages", the Season 1 finale of "The 7D". He is a dark wizard who tries to take over Jollywood.

He was voiced by Corey Burton.

Grudgemunger is a dark wizard in a black robe. He has green skin and a yellow crown with purple moons and red stars on it. His hair is dark blue.

He makes a brief cameo appearance in "The Enchanted Forest Ranger", as one of the villains in the evil group who plan to get rid of the 7D (Which consists, Snazzy Shazzam, Finders Keepers, the Ogre, Water Witch, Snow Witch, the Big Bad Wolf, & Gingerbread Witch when ranger Dirk Dumphrey (the main antagonist of the episode) reveals his true actions revealed at the end of the episode. 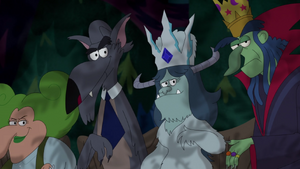 Lord Grudgemunger along with Snow Witch, Big Bad Wolf, and Gingerbread Witch in an evil group planning to get rid of the 7D.
Add a photo to this gallery

Retrieved from "https://villains.fandom.com/wiki/Lord_Grudgemunger?oldid=3549923"
Community content is available under CC-BY-SA unless otherwise noted.