Leader of the United India Company

As the public leader of the United India Company, Lord Hastings is well respected by most of the order, often visiting their councils. He and the lords Darwin and Barret are meant to travel to America onboard the Agamemnon, the best airship of the United India Company. Unknown to everyone, he is a master vampire named Jacob Van Neck, who is behind the Lycan attacks, and is other attacks by vampires in America and India.

He is accompanied by Sir Lucan, the Knight Commander of the Order. However, while investigating around Whitechapel, Sir Galahad, a knight of the order, finds evidence for an attempt on Hastings' life by the rebels. Galahad and a few other knights board the Agamemnon and manage to kill the rebels who were disguised as guards of United India. Sir Lucan brings Lord Hastings to safety. Because a bomb detonated and destroyed one of the main engines, the airship is evacuated. Hastings and Lucan leave the airship via an escape boat.

While on his way to Westminster to thank Sir Galahad for his rescue, his carriage is ambushed by rebels. He is trapped inside his carriage on the middle of Westminster Bridge. All available knights battle the rebels and manage to save Lord Hastings, who is brought inside the palace. Meanwhile, Sir Galahad, who wants revenge for his mentor Sir Percival who died in the wreckage of the Agamemnon, follows the rebels into their hideout.

There, he meets the rebel leader Lakshmi who tells him that the rebels fight the United India Company and Lord Hastings, as they are the root of the half-breed scourge. Although unconvinced Galahad travels with her to the company's docks at Blackwall Yard, where they see Lord Hastings. As this is no proof, they break into the hangar and discover shipping crates full of vampires. Hastings intents to send the crates to America to spread the plague. As there are enough vampires to infect a whole city they burn down the hangar, destroying all evidence.

Galahad convinces Sir Lucan to break into the United India House to find proof for the crimes of the company. Galahad, Lucan, Lakshmi and the rebels Dali and Finley manage to break into the archives. When they separate to find proof Lakshmi and Galahad hear a noise in a room. They enter and witness Finley's death, being killed by Lord Hastings, who shows his true colors. Galahad and Lakshmi are then betrayed by Sir Lucan who is a Lycan. Galahad throws a knife at Hastings to prevent him from attacking Lakshmi. She escapes, but Lucan and Galahad fight long until the Order shows up and arrests Galahad for conspiring with rebels.

During Galahad's trial, Hastings bears false witness, after that he is not seen again. 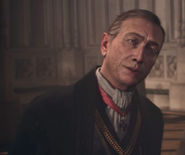 Hastings at the headquarters of the Order.

Lucan and Hastings aboard the Agamemnon.

Lucan and Hastings leaving the airship. 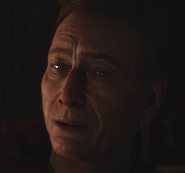 Hastings revealing himself as "Jack the Ripper".

Hastings accusing Galahad.
Add a photo to this gallery

Retrieved from "https://villains.fandom.com/wiki/Lord_Hastings?oldid=4235252"
Community content is available under CC-BY-SA unless otherwise noted.