Kill Meliodas and the Seven Deadly Sins (formerly).
Get Fraudrin out of his body.
Protect Liones.

He was voiced by Yūya Uchida in the Japanese version, and by Kaiji Tang in the English dubbed version.

Hendrickson is a serious man, who, like Dreyfus, seems willing to capture the king and enslave the citizens to prepare for the holy war. However, he also seems to be up to something, with the "new generations" of holy knights being part of the plot. What led Hendrickson to integrate with the demons was that the demon Fraudrin took control of his body and made him drink the red and gray demon blood. Fraudrin speculated to kill Meliodas using Hendrickson and in addition to reviving the Clan of Demons to dominate Britannia. But when Meliodas left Hendrickson dying, he made him revive the demons, and subsequently took over Dreyfus's body. Apparently no one noticed the change, as Fraudrin had accessed Hendrickson's memory so as not to be discovered.

When Hendrickson was young, he grew up in a village of Druids and was given the position to look after corpses until they turn into skeletons. Hendrickson was afraid of this job and hated it, making him run away from the village that he lived in. Sometime afterward, he joined the Holy Knights of Liones and befriended another Holy Knight named Dreyfus. The two knights question their king's vision of the Holy War and the purpose of the Holy Knights. One day, while investigating the remains of the kingdom of Danafor, Dreyfus told Hendrickson about his dream of becoming a powerful knight who protects people and being a figure to his son. Suddenly, the two are encountered by the demon Fraudrin who asks Dreyfus if he could borrow his body to kill Zaratras as he promised to fulfill his wish on becoming a powerful knight. 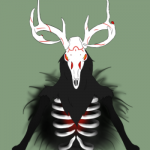