Obtain the oil and use it to fuel their vehicles.

Terrorize people across the wasteland.

The Marauders were brought together by Humungus. After hearing of compound containing lots of oil, the marauders to take all its gasoline to fuel their army of vehicles.

Two of the compound's inhabitants attempt to escape and though they fail, attract the attention of Max Rockatansky while doing so. Max then takes it upon himself, along with a few brave and self-sacrificing volunteers, to help the inhabitants of the refinery escape with their tanker of gas by fooling marauders into believing that Max and his commandos are escaping with refinery gas while diverting the marauders away from inhabitants.

Humungus and his lieutenant Wez were later killed in the final chase when Max reversed the direction of tanker so it rammed into Humungus' vehicle and killed both of them in the collision. With their leaders died, the remaining thugs simply gave up fighting, dispersed and scattered. Max's team was not without losses, however; out of Max's team only Max and Feral Boy survived. 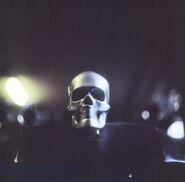 Retrieved from "https://villains.fandom.com/wiki/Lord_Humungus%27_Marauders?oldid=3540327"
Community content is available under CC-BY-SA unless otherwise noted.