The Adventures of Buckaroo Banzai Across the 8th Dimension

Leader of the red Lectroids


Knowledge of alien technology, including weapons and torture devices

Taking over the 10th dimension

Lord John Whorfin is the main antagonist in the 1984 sci-fi film The Adventures of Buckaroo Banzai Across the 8th Dimension.

He is portrayed by John Lithgow who also portrayed Burke in Blow Out, B.Z. in Santa Claus: The Movie, Earl Talbot Blake in Ricochet, Eric Qualen in Cliffhanger, Arthur Mitchell in Dexter, Jean-Claude in Rugrats in Paris, Lord Farquaad in Shrek, and Lamar Blackburn in The Accountant.

Lord Whorfin was the leader of the Red Lectroids, who had war with the Black Lectroids, the inhabitants of Planet 10. Whorfin was a ruthless dictator and a gruesome maniac, he even got compared to Hitler by the leader of the black lectroids. He was defeated by the Black Lectroids and was banished together with his army of Red Lectroids into the 8th Dimension. He possesses the body of Dr. Emilio Lizardo after Emilio got stuck in the 8th Dimension for a short while in the year 1938. An army of Red Lectroids lands later on earth, which Orson Wells reports on his radio broadcast War Of The Worlds, but he's forced by the Aliens to assure that everything he said was just fiction. After being held in the Trenton Home for the Criminally Insane for 50 years, Whorfin escapes after he sees that Buckaroo Banzai managed to get trough the 8th Dimension by using the oscillation overthruster. He plans on stealing it to rescue the rest of his army from the 8th Dimension with the help of his loyal minions. It doesn't really work, so he orders his minions to kidnap the twin sister of Buckaroo Banzai's dead girlfriend to torture her until she tells him where the overthruster is and/or hold her as hostage until Buckaroo gives him the overthruster. Buckaroo and his friends infiltrate the base of the Red Lectroids to rescue the damsel in distress and stop Whorfin from escaping in his spaceship. Lord John Whorfin tries to use an unsafe and untested prototype of the oscillation overthruster to get to the 8th Dimension but his spaceship gets destroyed by Buckaroo Banzai and a Black Lectroid before Whorfin can fulfill his plan of conquering Planet 10. 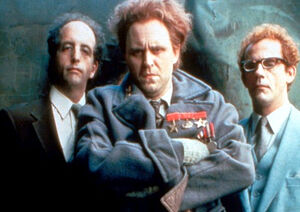 Lord Whorfin with two of his minions 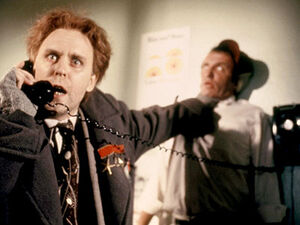