Ruler of the Province of Nagato

To take over the Province of Ako by force.

To overthrow Shogun Tokugawa Tsunayoshi and rule all of Japan.

Lord Kira is the main antagonist of the of 2013 film 47 Ronin. He is the corrupt ruler of the Province of Nagato (along with Mizuki) who banished Lord Asano and tried woo Mika who is Kai's love interest by tired married her. his rival was Kai who is born of English father and Japanese mother had fall in love with Mika who is his friend. Kira's goal was to become a shogun to rule Japan. at night of wedding when one of 47 Ronins - Oshi disguised as dancer and Kai had reunited with Mika. 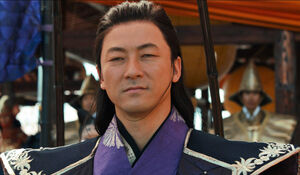 Add a photo to this gallery
Retrieved from "https://villains.fandom.com/wiki/Lord_Kira?oldid=3571399"
Community content is available under CC-BY-SA unless otherwise noted.