Komodo, also called Lord Komodo, is the main antagonist of the 1997 Chinese-American live action fantasy film Warriors of Virtue. He is an evil human sorcerer and a deadly martial artist who led an army of his fellow natives of the forest-like magic Land of Tao, men and women including Grillo with Barbarocious and Mantose and Dullard who like him, are obsessed with searching the key to achieve eternal life.

He was portrayed by Angus Macfadyen, who also played Vice-Counsel DuPont in Equilibrium.

Little is specifically known about this treacherous madman is he driven to madness with the obsession of eternal youth. He began amassing a group of followers to mine all of Tao's lifesprings in search of zubrium, an unique substance that radiates all the energy in all of Tao and its once-purely natural zones called Lifesprings. Komodo continiously consumes the condensed liquid zubrium to keep himself young and strong as do well as the rest of his wicked allies that helped mining and stealing all the zubrium.

When a newcomer, the young Ryan Jeffers unexpectedly in Tao, a few of Komodo's armored guards called Dragoon Soldiers found him and attacked but Yun defeated them and driven them away.

One of his soldiers, a Dragoon Commander returned to Komodo's fortress and brought to his master the lost Manuscript of Legend in Ryan's backpack before he was killed for his failed recon mission. Komodo must have the power of the book through its words spoken, orders his three other high-ranking minions Barbarocious, Mantose and Dullard to bring Ryan alive.

The warriors join forces once again and while Tsun and Lai remain behind, Yee, Chi and Yun hope to invade Komodo's fortress for the book. Meanwhile, Elysia tells Ryan that her brother had been killed some time ago and how he reminds her of him, but while her back is turned one of Komodo's leaders, General Grillo, kidnaps him and Elysia runs from the sound of Komodo's voice. As Yun, Yee and Chi break into Komodo's stronghold and try to take the book they realize they had been led into a trap set up by Elysia who ignores their pleas to leave Komodo who had become her lover and used her thirst for vengeance to turn her against them. They are then dropped into a deadly trap, which they barely manage to escape. Meanwhile General Grillo runs into Master Chung who quickly loses in a battle against him. When Komodo's armies invade, Chung then faces Komodo in a fierce battle that ends with him mortally wounded. Ryan runs, only to run into Mudlap who wittingly turns Ryan over to Komodo's army.

Moments later at Komodo's palace, Ryan discovers Elysia's treachery was due to the fact that Yun accidentally killed her brother in a battle, he discovers that Komodo plans to use his ability to read from the manuscript to return to Ryan's world and drink the life springs from there when Tao runs out. Ryan discovers that he too cannot read from the manuscript and the pages are blank, this sends Komodo into a rage which forces Elysia to defend Ryan, Barbarocious kills her in response to her defending Ryan. Komodo kills Barbarocious as Ryan escapes, upset about the sudden and abrupt losses and betrayals, Ryan's only desire is to return home, Mudlap feels sorry for what he had done and returns the watch that Ryan had given him originally, telling him where the warriors had convened. After Mudlap leaves, Ryan discovers he can read the manuscript and reads an inscription "Five is one, Positive Kung. To take a life, you lose a part of yourself", and begins to realize it's meaning.

The Warriors, after laying Master Chung to rest are called out by Komodo who uses his powers to pit the warriors against five duplicates of himself, they are each overcome by the greater power of Komodo's dark magic until Ryan arrives, taunting Komodo into attacking him and ripping up the manuscript, he cries the inscription to the others who use their combined power as Komodo delivers a fatal blow against Ryan effectively returning Komodo to a good man and removing his powers, the new Komodo born a stuttering homeless man simply asked how to find his way home. Yun tells him that he has now found a home. Ryan lies mortally wounded, but just before he succumbs, Yee (who had been forced by his virtue into a vow of silence) thanks Ryan and speaks his name.

Komodo's fate in Warriors of Virtue: Return to Tao is never revealed. 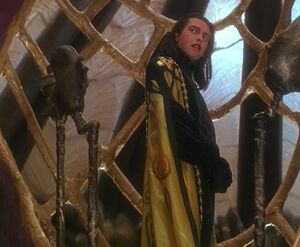 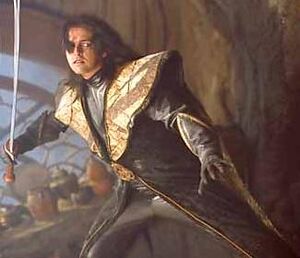 The Turn of Elysia.

The first fight with Komodo.

Taunting Yun.
Add a photo to this gallery 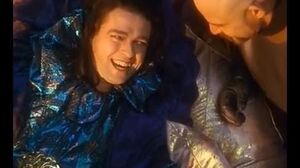 Warriors of Virtue Komodo Scenes (1997)
Add a photo to this gallery
Retrieved from "https://villains.fandom.com/wiki/Lord_Komodo?oldid=4280870"
Community content is available under CC-BY-SA unless otherwise noted.