Villains Wiki
Register
Don't have an account?
Sign In
Advertisement
in: Cleanup, Tyrants, Evil from the Past,
and 42 more

King of the Mondstadt (formerly)
Member of the Lawrence Clan

Taking care of his son.

Provide the freedom of Vennessa if she defeats Ursa the Drake.

Lord Lawrence Is a main antagonist from Genshin Impact Prologue: Songs of the Wind. He was the former head of the House of Lawrence Clan, father of Barca Lawrence and King of Mondstadt, who suffered the citizens of Mondstadt with all kinds of tyranny, which ultimately fell to Vanessa's uprising, which inflicted damage on his descendant, Eula Lawrence.

Lord Lawrence was born around at some time in 1,000 years ago prior as a descendant of Venerare, the earliest known leader of the House Lawrence. At some point in time, he was married and sired a son named Barca before becoming the eventual ruler of Mondstadt. At some point during the Aristocracy, Lord Lawrence found a traitor in the nobles named Kreuzlied, who was starting a rebellion with the Wanderer's Troupe group. The group had been disbanded after most of its members died and Kreuzlied was spared due to his privileged origins.

He is the former head of the Lawrence Clan and the King of Mondstadt, who, along with his son Barca Lawrence, initially caused great damage to Mondstadt. Then he demolished the statue of Barbatos, where the oath of protection was written, and built an ancient tower in its place.

He also seems to enjoy watching gladiator games, promising to liberate the Vanessa tribe if Vanessa wins in the final duel, but he commits sacrificing the Vanessa tribe to the dragon, which he believes will bring peace to Mondstadt. He eventually fell disastrously in an uprising with Vanessa, after which he appears to have died.

In conclusion, his evil deeds caused the citizens of Mondstadt to hate Lawrence Clan and cause harm to his descendant Eula, and all his descendants except Eula show such arrogance.

In the early history of Mondstadt, it was said that the freedom that the Anemo Archon, Barbatos gave to his people eventually became exclusive to the corrupt and privileged.

The Lawrence Clan have held captive Vennessa and her companions, which Venti called as the "flame-touched Muratans" (possibly referencing to the Natlan people). Vennessa was enslaved to become a gladiator to their arena, which surprises them for her undefeated streak.

During the final battle, Vennessa and her people were dragged outside Mondstadt's city walls by the Lawrence Clan knights. Lord Lawrence promised her freedom if she defeats Ursa the Drake. As the people outrages, once again, Lord Lawrence promises that the city of Mondstadt will be hers to rule upon defeating the dragon. One of his servant told him about the rioting, Lord Lawrence simply claims that he is giving the Drake an "offering for lasting peace" as they watched Vennessa fend off against the monsters.

When Vennessa ordered her people to regroup, Lord Lawrence orders his archers to open fire at Venness and her companions after they attempted to retreat from the onslaught of monsters. Before the situation gets more dire, Venti, in his Archon form intervenes and helped Vennessa defeat Ursa the Drake. Venti told Lord Lawrence about his promise of handing their liberty and the city of Mondstadt itself to Vennessa.

After the rebellion of Vennessa with the help of other people, including the Dawn Knight and the Gunnhildr clan, the reign of the Lawrence Clan was brought to an end and Vennessa re-established the city and became the founder of the Knights of Favonius, becoming its first Grandmaster as the "Dandelion Knight".

Despite their history and the revolution that brought an end of their reign, the Lawrence Clan is still active and moved somewhere around Mondstadt in the present generation. However, most descendants of the clan faced ostracism due to their history of tyranny, including Eula Lawrence, who was also ostracized multiple times. Some members including, Schubert, Eula's uncle attempted to return the glorious days of the clan by allying themselves with the Fatui to bring Mondstadt back to its proper "rule", however his own niece foiled their plans and arrested Schubert as a result. 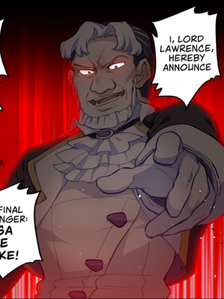 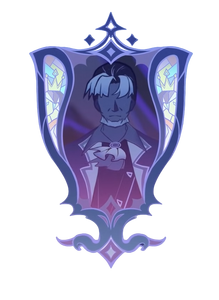 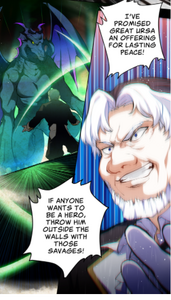