Lord of the Scorpions

Kulipari: An Army of Frogs

Leader of the Scorpion Army

Defeat and kill Darel, his team of Kulipari, and all of the desert inhabitants and then take over all of the land (failed).

Lord Marmoo is the main antagonist of the Netflix original series Kulipari, which itself is based on a book series by Trevor Pryce. He serves as one of the two main antagonists in An Army of Frogs and one of the three main antagonists in The Dream Walker. A tyrannical scorpion, Stinger's father and Darel's nemesis, Marmoo wishes to destroy the Amphibilands, teaming up with the Spider Queen, Jarrah, to accomplish this.

He was voiced by Keith David, who voiced Tublat from Tarzan, Dr. Facilier from Princess and the Frog, Atlas from Teen Titans, and Malcolm Kane from Stretch Armstrong and the Flex Fighters.

Marmoo was noticeably large in comparison to his fellow scorpions, which suits his power hungry attitude. Marmoo, and his army for that matter, were humanoid in appearance, and Marmoo's eyes tended to shift when he was infuriated.

Marmoo is wrathful, desiring to destroy the Amphibilands out of anger at being defeated years ago. Marmoo lacks any concern for anyone, expressing no guilt at nearly killing his soldiers when he collapses the Spider Queen's fortress. He also values his brother, Pigo, only because he deemed him strong enough to serve him. When Jarrah inquired this of him, he bluntly states that he only eats his weaker siblings. When Pigo's stinger was torn off during one of the battles, he gives him an ultimatum of banishment or being eaten.

Viewing that the weak should be destroyed, Marmoo seeks unlimited power, and would kill anyone who came in his way.

Kulipari: An Army of Frogs

In the first episode, Marmoo attempts to breach the Veil, a magical force field created to keep enemies out. After a majority of his army was slaughtered by Jarrah, Marmoo and his brother, Pigo are captured. Being forced to negotiate with the Spider Queen, Jarrah tasks Marmoo with collecting dirt from around the Amphibilands, and the High Wattleflower. Pigo and a few of the scorpions are able to breach the Veil, but they only obtain a twig. Marmoo also kidnaps Gee.

Criticizing his brother for his failure, Marmoo and his army suffer a temporary setback when their camp was set on fire on Darel and Gee. Despite this, Marmoo insists on invading the village. Jarrah uses her magic to deplenish the force field. Once the Veil is down, Marmoo's army attacks the village, and several frogs are wounded. Of the casualties Jir, an elderly frog who was stabbed in the back, and Sergu the Turtle King, who was Jarrah's former teacher. With nearly all of the frogs subdued, victory seemed to be in Marmoo's favor; however, he is betrayed by Killara, and is fatally stabbed by Darel.

Sometime later, Marmoo is resurrected by Jarrah; wanting revenge on the Amphibilands, Marmoo demands that he begin an assault on the village, only to be informed that he wasn't strong enough. Marmoo nearly kills Jarrah, only stopping from doing so, because he needed her, lest he be "soft as a slug." After suffering a humiliating defeat, Jarrah orders Marmoo to invade the Platypus Village in order to find the Stargazer. Reminding her that he was still physically weak, Jarrah grants him strength, and repays her by murdering her. While searching for the Stargazer, Marmoo gets into a quarrel with some of the frogs, ultimately killing the chief frog after the left side of his face is burned off.

Marmoo directs his fury at the remainder of Jarrah's army, and tells Fahlga to lower the Veil. When she reveals that she was not powerful enough, Marmoo nearly kills her, only to realize that the frogs were lowering the Veil. The scorpions invade the Amphibilands, and the village is burnt to the ground. The Kulipari are crushed, and several of the villagers are taken hostage. Personally killing Arabanoo, Marmoo exiles the frogs, gloating that they'd die a slow, miserable death in the desert, destroying all their food and medicine to ensure they can't survive. Marmoo opts to withhold water from the surrounding villages as to assure that he had control. His scheme is foiled, when Darel and Quoba drop a rock into the water, which causes a whirpool to form. The whirlpool sucks all of the water out of the Arachnilands, washing away Marmoo and his army in the process. 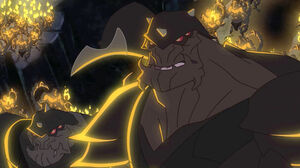 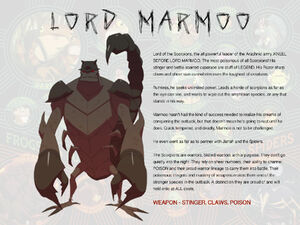 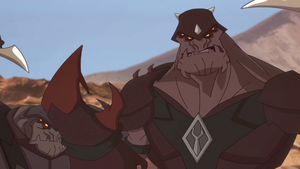 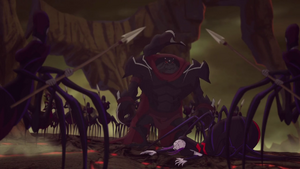 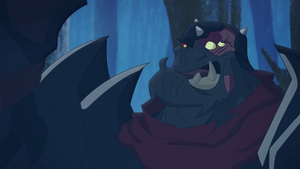 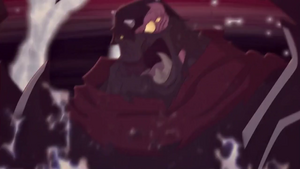 Marmoo meets his end when he's absorbed by the whirlwind of water. 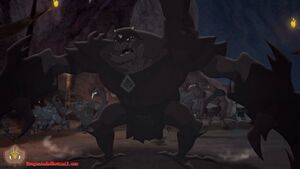 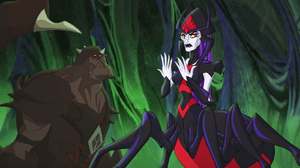 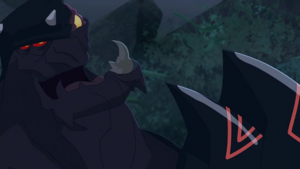 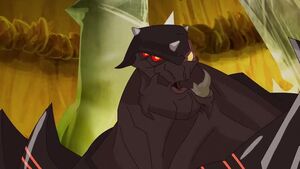