Lord Nekron, also simply known as Nekron, is the main antagonist of Ralph Bakshi's 8th animated feature film Fire and Ice. He is the tyrannical overlord of Icepeak and Queen Juliana's son.

He was voiced by Stephen Mendel, who later played General Dark Onward in Angry Video Game Nerd: The Movie.

Nekron and his evil mother Queen Juliana send forth a wave of glaciers, forcing humanity to retreat south towards the equator.

Nekron sends a delegation to King Jarol in Firekeep to request his surrender, but this is a ruse orchestrated by Queen Juliana for Nekron's sub-humans to kidnap Jarol's daughter, the 15-year-old, barefoot, microkini-wearing Princess Teegra.

Queen Juliana feels that Nekron should take a bride to produce an heir. However, Teegra makes an escape and comes upon Larn, the only survivor of a village razed by glaciers, who offers to escort her back to Firekeep. As Teegra is recaptured, Larn teams with the mysterious Darkwolf to save Teegra and then travel to Icepeak to stop Juliana.

Darkwolf eventually faces Nekron and kills him as Icepeak succumbs to lava released by King Jarol and is destroyed.

Nekron is the cunning, tyrannical, manipulative and blasphemous overlord of Icepeak. He is very competent, intelligent and knowledgeable, so he is able to use powers of ice. He is also extremely lascivious and provocative towards Teegra, as he is married to Teegra if it will bring peace to the kingdoms. He also has a fondness for controlling glaciers somewhere in Larn's village. One of his cruelest plans was when he sent his band of sub-humans to capture Larn and Teegra. 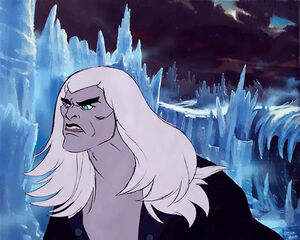