Nightmare Wizard
eNeMeE (Kirby: Right Back At Ya!)
The Nightmares

Tormenting the residents of Dream Land.

Spread darkness and nightmares throughout the galaxy.

Nightmare, often referred to as Lord Nightmare or Nightmare Wizard, is a major antagonist in the Kirby franchise. He is a cosmic wizard who desires to spread darkness and nightmares throughout the galaxy, including Planet Popstar, the home planet of Kirby.

Nightmare initially manifests as the Power Orb. In this form, Nightmare is a dark sphere covered in glowing silver stars. A gradient runs across the sphere: the top of the sphere is dark blue while the bottom is magenta. However, in a number of early appearances and artwork, the sphere is simply pitch black and colorless.

His real form is a wizard (though his Kirby's Adventure sprite slightly resembles Count Dracula) donned in a spinning, tornado-like robe. In the official art for Kirby's Adventure and the anime, his robe is covered in stars just like in his first form. However, in the actual games, Nightmare's cloak is simply a dark purple robe. On his face, he wears a pair of shades with a single black-chromed lens that flashes.

Underneath his cloak lies his weak spot, a wildly-twisting accumulation of darkness. Above his robe, Nightmare wears silver pauldrons and a small red medallion around his neck (sometimes obscured by his chin in-game). In the games, Nightmare has human-like teeth, while in the anime his teeth are sharp and jagged. According to official artwork from Kirby's Adventure, Nightmare has thin bony arms, though this characteristic was not included in later installments of the series except for the anime.

In Kirby: Nightmare in Dream Land, Nightmare's second form is slightly changed. He now has a total of four shoulder pads instead of just two, and much longer horns on his helmet. His chain and medallion are also now consistently visible during the fight. There are also two more jewels on his headpiece. This game's design also reflects a notable decision made to his size in Kirby: Right Back at Ya!, in which he dwarfs even the Halberd. In accordance to the show, he is also almost as tall as the screen now.

His design in Kirby Mass Attack takes a number of visual cues from his design in Kirby: Nightmare in Dream Land, though his shadowy cloak no longer conforms to the shape of his tornado-like core and instead bears more resemblance to the original shape of the cloak as seen in the Kirby's Adventure artwork.

Nightmare is a powerful entity who serves as the final boss in both Kirby's Adventure and its remake. In both games, he can only be defeated by the powerful Star Rod that Kirby collects in both games.

In these games, Nightmare takes control of the Fountain of Dreams in an attempt to extend his control over Dream Land. Trying to prevent this, King Dedede breaks the Star Rod and scatters it around Dream Land, temporarily leaving Nightmare unable to take control and seems to trap him inside the Fountain of Dreams. However, Kirby was unaware of Dedede's intentions, believing that he was up to trouble, so he restores the Star Rod and places it back in the fountain. With the Star Rod back in place, Nightmare reveals himself. Nightmare flies away into space, with Kirby catching up with help from Dedede inhaling and spitting him into the sky.

In his initial orb form, Nightmare stays on the right side of the screen for the most part, shooting empty blue stars at Kirby. The fight is similar to the fight with Kabula in Kirby's Dream Land, but with a time limit, for the entire battle takes place in the planet's atmosphere as the two are falling to Pop Star's surface. As such, if Kirby augments Nightmare's health bar in time, Nightmare will flee and Kirby will crash into the ground and lose a life. After the final blow is struck, Nightmare retreats and flies to Pop Star's moon. Kirby follows close behind on a Warp Star.

As Kirby pursues him, the Power Orb suddenly metamorphoses into his true form. After knocking Kirby from his Warp Star and onto the surface of the moon, Nightmare teleports in close to finish him off, effectively beginning the second phase of the battle. In his second form, Nightmare attacks Kirby by shooting stars at him, ramming into him, and using his tornado-like core to drill into him. He takes fewer hits to defeat than in his first form, but can only be damaged by hitting his weak spot, the accumulation of darkness at his core, which is usually protected by his impenetrable cloak. He briefly reveals his weak spot during each of his attacks.

After Kirby lands the finishing blow, Nightmare's body explodes, destroying a huge portion of the moon as a result. After this, Kirby returns to the Fountain of Dreams, places the Star Rod back in there, and everything returns back to normal.

Nightmare himself does not appear in the game. However, his Power Ball form makes a minor cameo at the Fountain of Dreams stage.

In Kirby: Canvas Curse, Nightmare makes a cameo as a painting in Paint Panic. He is the hardest painting to draw, with a total of four stages.

Additionally, Nightmare's battle theme from the previous game theme received a remix that plays in the penultimate stage in the game, Spectacle Space.

Nightmare appears in Kirby Mass Attack as the final boss of the "Strato Patrol EOS" sub-game. In his orb form, he attacks by teleporting around the area and firing stars and energy blades until he takes sufficient damage. In his second form, like in Kirby's Adventure and its remake, he only takes damage when his weak point is open. However, this time around his attacks are almost completely changed. He commonly attacks by releasing energy orbs that follow the Kirbys until they disappear (he fires more orbs as he takes more damage). He also conjures pointed meteors to collide with them, but they can be destroyed before he even drops them. The meteors will also break up into smaller rocks when fired at, which the Kirbys must then avoid. Later in the battle, Nightmare will try to fire energy beams and star barrages at the Kirbys. His defeat animation parallels the one in Kirby's Adventure and its remake.

An alternate version of Nightmare from Another Dimension named Parallel Nightmare appears in Super Kirby Clash as the main antagonist. Emerging from a portal to Another Dimension, Parallel Nightmare invades the Dream Kingdom, where he brainwashes the habitat monsters under his control so he can take over the kingdom. When Team Kirby fights against him, he summons multiple monsters to aid him in battle, including the black mirror possessed Taranza, Parallel Susie, King D-Mind, and the Aeon Hero. It is up to Team Kirby to stop the evil wizard and bring peace to the Dream Kingdom.

Kirby: Right Back At Ya!

Nightmare serves as the overarching antagonist of the Kirby anime. He is the head of Nightmare Enterprises and sells monsters to King Dedede to defeat Kirby. In the English dub, he is called eNeMeE.

Nightmare also appears in Super Smash Bros. Ultimate as a primary grab type spirit, with his spirit battle being against a giant black-colored Kirby wielding a Star Rod on the Fountain of Dreams stage, while also summoning the Nightmare Assist Trophy. First in his Power Orb form, it can be enhanced to Nightmare Wizard at level 99, which grants the effect of slowing the charge of the opponent's Final Smash Meter. 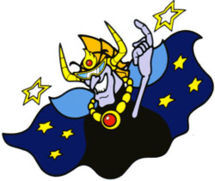 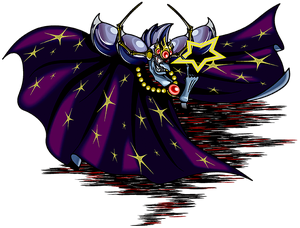 Nightmare with the other final bosses, at top-right. 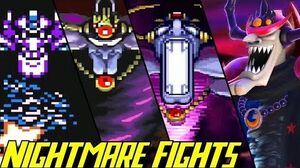