Governor of the local Bronze city

Revolutionizer of the Bronze Age (both formerly)
Ore miner

Rubbing money on himself.

Keep Dug and the cave people off their valley.
Destroy the Stone Age by making Dug and his people slaves once he beats them in a tournament, so that he can maintain his leadership over their valley.
Steal the Bronze and run off with it (all failed).

Lord Nooth is the main antagonist of Aardman Animations' seventh animated feature film Early Man. He is the tyrannical leader of the Bronze Revolution and is Dug's archenemy.

He was voiced by Tom Hiddleston, who also played Loki Laufeyson in the Marvel Cinematic Universe, and Captain James Hook in Disney's The Pirate Fairy. In the Spanish dubbed version, he was voiced by Mario Vaquerizo, who also voiced King Poseidon in The SpongeBob Movie: Sponge on The Run.

Nooth is completely bald and his nose sticks out. His clothing is a purple robe with a bronze football sash in the middle, a maroon cape, and boots. If one was to look real close, Nooth is shown to have a gold tooth.

Despite being the leader of the Bronze Age, Lord Nooth is a buffoonish person to put it bluntly. He is territorial, greedy and possessive, and invaded the Stone Age Valley without a second thought. Beneath all this, he is secretly a weakling, as when the Queen arrives to berate him for playing a football game with the Stone Age people, he panics.

Nooth is also willing to do anything for money such as striking a deal with Dug because he was told the masses would flock to see a vulgar match between the cavemen and Real Bronzio. He is also shown to have poor sportmanship since he is above playing dirty, like trying to frighten Dug into forfeiting the game and even going as far as to knock out Dino into being the referee of the game and giving Real Bronzio an unfair advantage.

Lord Nooth is first seen when he invades the Stone Age Valley, proclaiming that "the age of stone is over". Banishing the tribe (except Dug) to the Badlands, he is unaware that Dug has accidentally snuck onto a truck and made it to the Bronze Age City. When Dug invades a football game and challenges his team to a match for the safety of his valley (despite not knowing what football is), Nooth accepts, realizing that it could be a good moneymaking opportunity.

After being visited by a "message bird" sent by Queen Oofeefa, he tries another tactic: he had discovered some mysterious cave paintings showing that Dug's tribe in the past were actually proper rubbish at football, and despite inventing it, had never won a game. Nooth attempts to discourage Dug, but the caveman and his tribesmen go on with the game.

In the climax of the movie, the big game, Nooth gets incredibly antsy when the Tribe are looking to be winning. To counter this, he knocks the referee out, takes his place, and makes up a ton of bogus rules, allowing his team to violently attack the tribe. He pushes the game in his complete favour, but not until the tribe manage to score a winning goal in the closing minutes of the game and win 4-3. In a final bid, Nooth tries to steal money and escape in a rat mascot costume, but is caught by the giant Duck and is taking of the bronze back to the audience before he is knocked out by a bronze plate,

Nooth is last seen working in a mine, meaning that he was removed from his position permanently, arrested and was forced to mine ore. 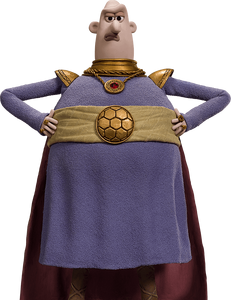 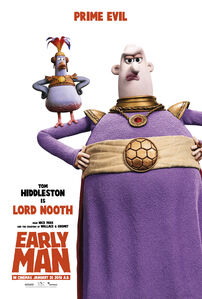 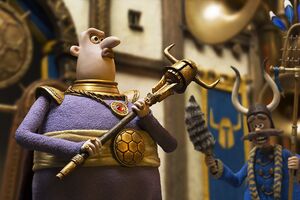 Lord nooth rubbing money on himself. 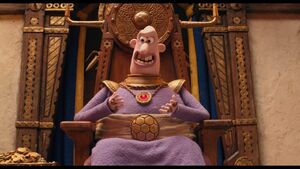 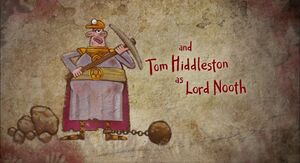 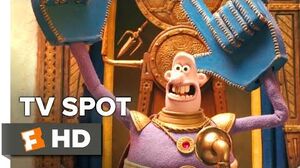 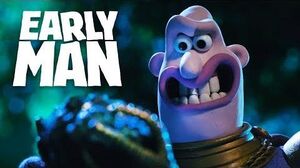 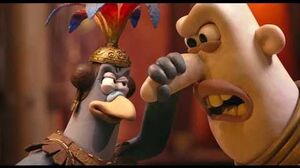