Trying to kill his brother.

Plotting to usurp the throne of Atlantis.

Kill his brother Aquaman and his baby nephew in order to usurp the throne of Atlantis.

Kill the Justice League.
Destroy the Surface World and their inhabitants.
Conquer the entire world (all failed).

Lord Orm (also simply known as Orm) is the evil and sadistic younger brother of Aquaman, who stole the throne from him during a time of tension between Atlantis and the Surface World. He is based on the DC Comics villain Ocean Master but is much more evil than his original counterpart.

He was voiced by Richard Green.

Orm first appears as Aquaman's brother and a seemingly loyal supporter of his sibling's rule. However, it later turns out that Orm attempted to have his brother assassinated by hiring Deadshot and have the act made to look like the surface world had done the deed. In doing this, Orm hoped to become the new king of Atlantis and be free to start a genocidal campaign against the surface world, which he viewed as inferior.

Though Aquaman survived the attempt on his life, upon returning to Atlantis he found that the damage had been done. Orm had seized power and with his loyal minions had Aquaman imprisoned. Soon capturing the Justice League as well, Orm used their arrival as an excuse to declare war on the surface world. Using a radiation-powered doomsday weapon, he intended to melt the polar ice caps and with that flood entire cities.

To ensure that his rule remained absolute and unchallenged, Orm also left Aquaman and his infant son to die, not counting on Aquaman being determined to free himself and save his son from death by cutting his own arm.

With the Justice League at his side, Aquaman took the fight to Orm and personally engaged his sociopathic brother. As Green Lantern and Batman disarmed the doomsday weapon, the ground gave way beneath Orm's feet during his fight with his brother. Clinging on to the edge for dear life, Orm pleaded for his brother to save him, but an unmoved Aquaman instead grabbed his discarded trident and let Orm fall to his apparent demise. 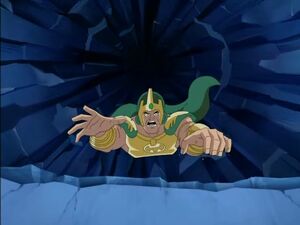 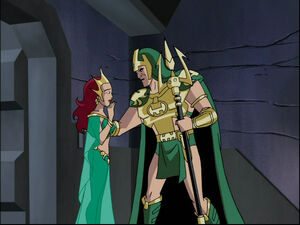 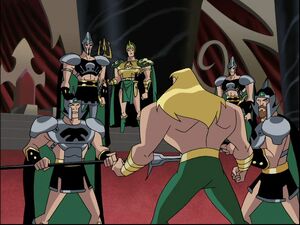 Retrieved from "https://villains.fandom.com/wiki/Lord_Orm?oldid=3642198"
Community content is available under CC-BY-SA unless otherwise noted.