Taunting Fortesque, bossing around his subordinates

Defeat Sir Daniel Fortesque, recover all the pages of Zarok's spell book, take over London and eventually, the world

Lord Palethorn of Shoreditch (neé Reggie Pallthrop) is the primary antagonist of MediEvil 2. He is voiced by Marc Silk.

A successful industrialist, Palethorn embraced the ethics of the Victorian age. He exploited every opportunity and was hungry for wealth and social acceptance, even changing his name from Reggie Pallthrop and bought a title to make him seem more a part of the establishment. He believed that Black Magic was the key to power and wealth. Using Zarok’s spell book he planned on taking over London and eventually, the world.

In 1878, prior to the events of MediEvil 2, Palethorn and Professor Hamilton Kift travelled to the Hebrides to locate the last missing pages of Zarok’s spell book. After searching the burial grounds, the spell book was discovered at the Northern part of the island in a tomb. Upon touching the book, the Tomb began to collapse around them. Palethorn abandoned Kift and escaped with the spell book.

In 1886, Palethorn used Zarok's spell book and unleashed havoc on London. The spell resurrected the dead across the city, including the skeletons of dinosaurs housed in the museum. Because the spell book was missing some of its pages, Palethorn was mutated into a red-skinned monstrosity with elongated ears as a side-effect. Palethorn then set out to find the pages, so he could control the zombies he brought back to life. During this time, Palethorn and his assistants, Dogman and Mander worked on a machine named the Great Scope at the Greenwich Observatory to instantly locate all the missing pages of the spell book, however his plans were foiled by Dan after he crashed an airship into it. Soon after Palethorn builds Iron Slugger and organizes a boxing match with Kiya as the prize, Iron Slugger is defeated by Dan and his plans are thwarted yet again. Now realizing Dan is becoming more of a nuisance he contacts The Count to help dispose of him whilst he continues his search for the pages. He finally confronts Dan at Cathedral Spires and recovers the last page of the spell book from him. Now obtaining all the pages, he summons a demon to destroy Daniel once and for all. Dan manages to confuse Palethorn's ship into hitting the demon, which eventually led to his defeat. He then uses one last attempt to kill Dan and triggers an explosion, but ultimately fails resulting in his own death.

He can be seen in one of the game's endings if the player manages to collect all the chalices, in which Dan and Kiya travel to an alternate time line, where Palethorn used the spell book to travel back in time. 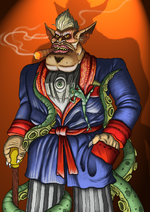 Retrieved from "https://villains.fandom.com/wiki/Lord_Palethorn?oldid=3368998"
Community content is available under CC-BY-SA unless otherwise noted.