The God of Metal

Kill all the Darkstalkers and gain their soul.

Lord Raptor ("Zabel Zarock" in Japan) Is a character from Capcom's Darkstalkers videogame franchise. He is one of the most prominent characters and has appeared in many Capcom crossover games.

He is voiced by Yūji Ueda in the games and Scott McNeil in the Darkstalkers OVA.

Lord Raptor is an undead zombie who hails from Australia. He's known for his viscous attitude, shifting body, battle prowess and guitar skills. After his death he was transformed into a ghoul by the Demon Lord, Emperor Ozom as his own personal bloodthirsty assassin used to collect souls for him to feast upon. Raptor eventually broke free of Ozom's control and became independent. He now lurks around Makai with his pet Le Malta looking to spread chaos.

Raptor normally appears as a handsome lean and muscular young man with long purplish rocker hair, although his skin is a pale blue while his eyes are blank white showing that he's not human.

When he's faced with a combatant he transforms in a wave of red energy into a zombie with a skull face, spiked up hair and a gaping torn open stomach with sharpened ribs poking out. His fingers become eaten down to the bone with a dull yellow color and his forearms show his fleshy muscles underneath his skin. Despite his somewhat frail appearance in this form his power is very rarely outmatched as Raptor becomes a versatile monster of destruction with swords, chainsaws, spears and many other weapons coming out of limbs at will.

Zabel Zarock was originally a human musician from Australia who was so talented his peers called him the God of Metal. He was extremely charismatic and skilled but he had trouble getting his music career off the ground since his first album Oral Dead had trouble being exposed and did not get much attention other than a small cult following. However everything changed when his second album was released selling over 200,000 copies in a month and eventually reached 1,000,000 paving the way for Lord Raptor to become a heavy metal legend.

During his stardom Raptor indulged in Sex, Drugs and Rock N' Roll however he acted differently spending most of his time writing songs or planning concerts. Every single concert that took place often had fights break out or people needing to be sent to the hospital cause of heart attacks (a few of which were fatal) because of this the police would monitor his actions and he was often banned. This proved to be more of a problem as Lord Raptor's fans would due riot to their dedication to the star. Some people compared their loyalty to that of a cult.

Lord Raptor's short but successful rock career ended in a mysterious and brutal mass murder that baffled the authorities who found what was left of Raptor's body. In a strange out of the way venue the bodies of Lord Raptor's 100 most loyal fans were found drained of blood with expressions of pure joy and the the bleached skeleton of what seemed to be Raptor on the stage with his iconic guitar beside him.

After looking into Raptor's massive home the men came to a frightening conclusion. 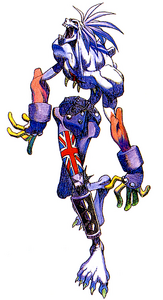 Lord Raptor as he appeared in Darkstalkers: The Night Warriors 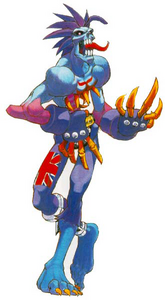 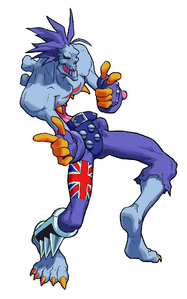 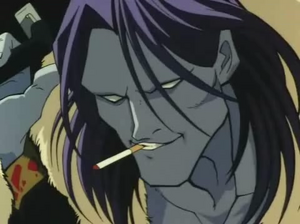 Lord Raptor's true human form in the Night Warriors OVA. After his death his skin became blue and his eyes became white and souless. 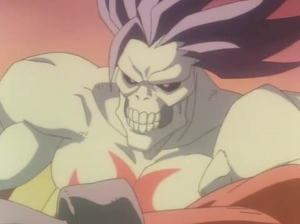 Lord Raptor's zombie form in the OVA. Raptor uses this form for combat or to use his various supernatural powers 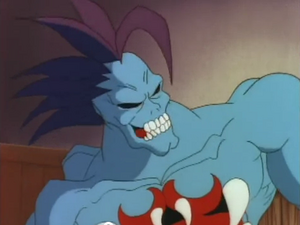 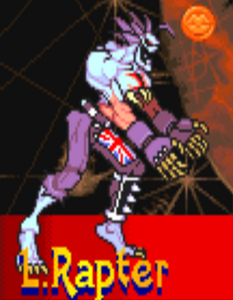 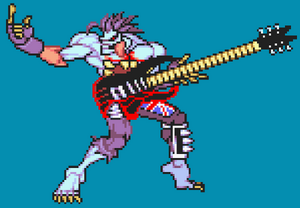 Raptor with his guitar 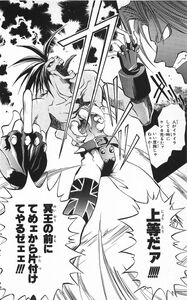