Lord Rataxes (also simply known as Rataxes) is a minor antagonist in Laurent and Jean de Brunhoff's Babar books. He appears as the main antagonist of Nelvana's Babar: The Movie, and becomes the recurring antagonist in their Babar television series. In the series, Rataxes is the sometime enemy and sometime friend of Babar. His son named Victor is a friend of Babar's children.

He was voiced by the late Charles Kerr in the film, and by Allen Stewart-Coates in the TV series.

Rataxes first appears in The Travels of Babar. When Babar's friend Zephir the monkey ties a firecracker to his tail, Rataxes declares war on Babar's kingdom and leads his army to destroy Celesteville. Babar and Celeste (returning from their travels) decide to stop the rhinoceros army by frightening them. They dress their elephants up with elaborate wigs and paint giant faces on their backsides, causing Rataxes and his army to panic, thinking they are being attacked by monsters. Rataxes is captured and paraded through Celesteville in a cage.

Babar's strategy is loosely borrowed for Babar: The Movie. In the book, Rataxes remains on all fours, unlike the elephants, and wears a helmet similar to a Spanish Conquistador's. This design also carries over to the movie.

For the film, Rataxes is recast as a more darker villain than in the books. He is a ruthless, tyrannical, manipulative, and calculating rhinoceros ruler who will stop at nothing to defeat Babar, the King of the Elephants and his kingdom. His rhino soldiers terrorized and burned Queen Celeste's village down and kidnapped the adult elephants, including Celest's mother, to use as slave labor. Rataxes and the soldiers were marching to Babar's kingdom to attack. Babar, after escaping Rataxes's dungeon and freeing the captured elephants hatched a plan and gathered the citizens to help him defeat Rataxes and his minions. The citizens built a giant mammoth balloon to scare off Rataxes's minions, who on retreating were met by the freed slave elephants and Babar's crocodile friends. Rataxes now had to face the elephants himself, but before he could do that, he was scared by the mammoth balloon and ran away.

In the television series, Rataxes becomes a more comic figure. Although Rhinoland is still Celesteville's rival, Rataxes is more interested in outdoing them than conquering them. Mostly, his efforts to beat Celesteville are forced on him by his nagging wife Lady Rataxes. Some conflicts involve his efforts to make his son Victor as strong a leader as Rataxes believes himself to be. Victor's friendship with Babar's children leads to further conflicts between the two fathers.

Although he is officially an enemy of Babar, Rataxes occasionally becomes an ally, as he does in Babar's defeat of the hunter who killed his mother. 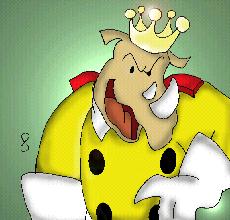 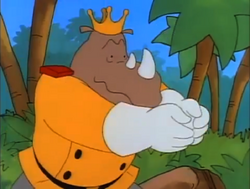 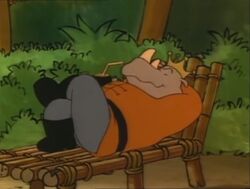 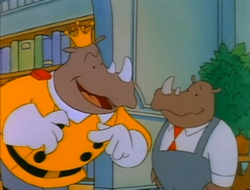 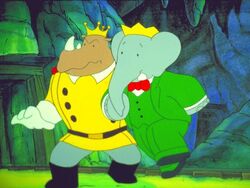 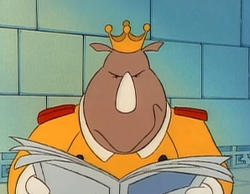 Add a photo to this gallery
Retrieved from "https://villains.fandom.com/wiki/Lord_Rataxes?oldid=3739853"
Community content is available under CC-BY-SA unless otherwise noted.