Conquer China (both failed).
Obliterate every single panda bear across all of China (partially succeeded).

Shen's Army is the main antagonistic faction of DreamWorks's 22nd full-length animated feature film Kung Fu Panda 2. They are the military forces of Shen that serve as Lord Shen's army; which compromises of wolves and gorillas led by Boss Wolf, the pack's military strategist and loyal servant of Shen.

The wolves and gorillas of Shen's army are loyal, savage, and both fear and respect their two leaders: Boss Wolf and Shen. They are also bullies and have no qualms with picking on the citizens of Gongmen City, and they are ruthless as they willingly slaughtered an innocent farming village of pandas on Shen's orders.

These wolves and gorillas once served as the royal guard of Gongmen City. But the only member of the royal family ever to befriend the wolves was Shen, the heir to Gongmen City's throne. Shen fed them, played with them, and treated them like family. The pack and their leader eventually swore their allegiance to Shen.

Shen then ordered them to attack the Panda Village to avert the prophecy that "a warrior of black and white" will defeat him. When Shen was banished by his parents for the heinous crime, the pack and their leader were banished alongside him.

When Po and the Furious Five arrived in Gongmen City after learning what happened to Master Thundering Rhino, they ended up running into the wolf army and fought them until their capture.

In the climax of the battle, Boss Wolf was killed when he tried to turn against Shen. Most of the wolves and gorillas were killed when Shen's vessel exploded while a few escaped to an unknown fate.

The wolves and gorillas didn't make a live appearance in Kung Fu Panda 3, but it turns out that several pandas (led by Po's father Li Shan) have escaped the wolves' slaughter and have taken refuge in a village on the mountains. However, the wolves are briefly seen near the end of a recycled flashback told by Li of how he lost his family, just as Po and Li conspire together to protect the panda village from the arriving Kai the Collector and his army of Jombies.

The wolves and gorillas make up the majority of Shen's military force. Supervising animator Rodolphe Guenoden noted how the wolves use a non-academic fighting style, possessing the build to appear "hunched over and vicious-looking, and...attack more like brawlers, moving as a pack." All this being, they primarily use weapons to fight their battles. Many of them wield swords similar to Shen's lance or a different kind with flame-like edges, and they have a faction of archers.

The wolves' skills in battle extend beyond just weapons and fighting stance. The wolves are also notable for being deceptive, strong, savage, and using numbers to overwhelm their foes. They use howling as a means of communication and signals, allowing them to organize and remain coordinated amongst a large pack. Some or all of the wolves also seem to serve as the "stealth force" of Shen's army, as they are swift, agile, and capable of leaping great heights and running across rooftops.

The gorillas are said to be familiar with kung fu themselves, as well as talented in weaponry. However, they rarely ever relied on such things as their intimidation alone stroke fear in their opponents. They're also noted to be very strong as well as agile, making them incredibly tough opponents.

The wolves are known to wield a wide variety of weapons, of such consist of mainly swords, spears, and bow-and-arrow sets. Art director Tang Kheng Heng noted how "the [weapon] designs were inspired by weapons we saw in Ping Yao, where the first bank in China was created and therefore needed solid protection."

The wolves' entire armory is best notable for keeping with the film's flame motif, the curves and points of the metal reflecting the movements of fire. This was meant to serve as a constant visual reminder that the wolves were Shen's fiery force.

All of the wolves keep a basic, consistent look in their protective wardrobe, with only some unique features on a few wolves. The basic look consists of leather wraps along their whole upper body, variously-styled leather elbow and shoulder pads, and from the waist down wear a kilt made out of leather and/or scaled armor. Molded onto some of this armor is Shen's fiery-red "peacock eye", symbolizing the wolves' allegiance to the evil prince.

Some wolves were given a few extra layers of clothing; among one of them were metallic masks, worn to protect their face but also add to their threatening and menacing appearance. Character designer Nicolas Marlet found it "fun to play up the threat factor with all kinds of one-eyed, mohawked, masked versions of the wolves," but was found challenging to the animators. This was because "[the masks] are crafted out of metal yet required rigging to allow expression to some extent," explained character technical direction supervisor Martin Costello. In the end, the animators were less rigid about implementing individual facial expressions because they wanted to maintain the "packness" of the army. Other unique additions made to the wolves' armor were strands of rope, which some had tied around their waist and/or arms presumably to help secure their armor.

The gorillas wore very little clothing, wearing only armored pants and leather wristbands around their arms 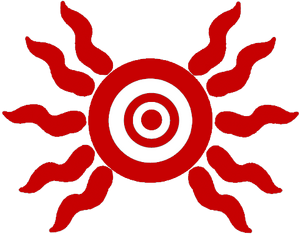 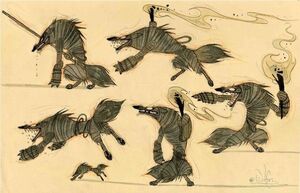 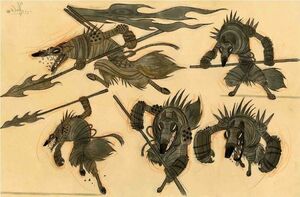 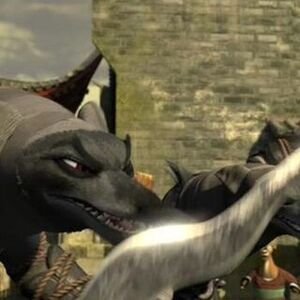