Lord M. Night Shyamalan
The F**kup Lord
The Devil
Will Smith
Ghost of Will Smith

Shyamalize the Critic and any other actor he comes across (failed).

Lord Shyamalan is the main antagonist of The Nostalgia Critic's review of the infamous widely panned film adaptation of Avatar: The Last Airbender; The Last Airbender. He is also the main antagonist in the review of the movie "Devil" in which he tries to get revenge on the Nostalgia Critic for releasing Aang from the original show. Lord Shyamalan also appeared during the "After Earth" and "Pixels" reviews, but unlike the other times Lord Shyamalan appears, he doesn't try to get his revenge, nor try to Shyamalize the Critic.

He is portrayed by Malcolm Ray, and voiced by Rob Walker.

Shyamalan was a hooded figure who made it his goal to ruin the Avatar: The Last Airbender franchise. Katara (Rachel Tietz)  and Sokka (Malcolm Ray) find the Critic and tell him that he's the Avajerk who's the only one who could bring peace to the franchise. While reviewing the film, Shyamalan appears on the television telling of his intent on ruining the franchise and making it even more awful by making a film adaptation of the spinoff of the show The Legend of Korra, even though it's a fairly new successor to the original show. In order to prove that he wasn't making feeble threats, he revealed that he took away Mark Wahlberg's acting ability making him appear in the film, The Happening. Near the climax of the review, Shyamalan makes an unexpected appearance in the Critic's house and attacks them. Katara demanded that the Critic finish the review while she held him off, and he complies. Lord Shyamalan defeats Katara, and Shyamalizes the Critic, taking away his acting ability. Katara tells Critic to meditate and find his spirit animal which he does. When he sees his spirit animal, he's surprised to see that it is a platypus bunny (the one that appeared in the Les Miserables review during one of the songs), who had the voice of Doug Walker. With the platypus bunny, the Critic discovers that the film isn't hurting the franchise at all, and better yet it caused people to appreciate the original more and stated that the film director couldn't remake what was already perfect. However, Lord Shyamalan was still going to try to defeat them, leaving the Critic to ponder what the show would do in these kinds of situations. He gets an idea and calls upon a deus ex machina and Aang (played by Trevor Mueller) appears. Aang murders Shyamalan, making Sokka confused since he thought it was against his code to kill people whereas Aang was nonchalant about it.

Interestingly, despite being a parody, many viewers note that this twist was much better than the one that was actually from Devil.

Lord Shyamalan makes an appearance in the After Earth review disguised as Will Smith and the Ghost of Will Smith. After the review the Ghost of Will Smith appeared in the Nostalgia Critic's room. He tries to convince that, through Shyamalan Twists he's the Critic's father. He then tries to convince the Critic that he was his brother, then sister, then puppy, and finally French Vanilla. Not convincing the Critic, the Ghost of Will Smith was about to reveal that he's Lord Shyamalan. However, the Critic called him Shyamalan before he revealed himself. He asked the Critic if he really was that predictable. But the Critic replied by asking him how he was even there as Lord Shyamalan was killed two times. To which, Shyamalan replied that he's Shyamalan and that nothing with his name makes any sense. He then tells Critic if he want to see continuity, go see a Linkara review, followed by him doing a Woody Woodpecker impersonation. After which, Lord Shyamalan leaves the Critic's room by jumping through the ceiling. Shyamalan then ends the episode by wearing a top hat, carrying a cane, and starts dancing and singing; " Why does everyone keep on hiring me? All of my work is Shhiiiiitttt......", with the Looney Toons theme song.

Lord Shyamalan reappears during the Crtic's re-enactment of the critically panned film Pixels. The Critic is commenting on how cliched the film is for 2015, and he has Jim Jarosz in the room, but he says his "acting will be Shymalized." True to form, Lord Shyamalan appears standing menacingly behind Jim. He is about to slam his thumb on Jim's head, brainwashing him, when the Critic points out a mistake. He walks up to Shyamalan and says "You know how in most films they have a not funny to funny route?" and then he says in this film the opposite will happen. Lord Shyamalan humorously then says "Thanks buddy" and the Critic leaves. Lord Shyamalan then slams his thumb onto Jim and brainwashes him, leaving him struggling not to laugh. Still nothing happens, just Malcolm, Tamara and the Critic staring awkwardly at them. Eventually, Lord Shyamalan says "Christ, this is too awkward even for me - and I'm Shyalaman!" He leaves in disgust.

Shyamalan was an obvious parody of M. Night Shyamalan and was based on Amon as presentation to being serious.

Lord Shyamalan is severely narcissistic and considers himself a good film director, even though all the critics of his movies say otherwise. 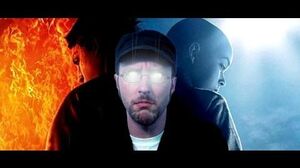 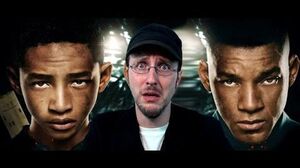 After Earth - Nostalgia Critic
Add a photo to this gallery

Retrieved from "https://villains.fandom.com/wiki/Lord_Shyamalan?oldid=3703650"
Community content is available under CC-BY-SA unless otherwise noted.