Lord Slug's Clan is an army of fighters led by the Super Namekian, Lord Slug, and the antagonistic faction in the film Dragon Ball Z: Lord Slug.

In their debut film, the clan turns their attention to Earth. They land their spacecraft on Earth and terra-freeze Earth's atmosphere, planning on turning the planet into a Planet Cruiser to use as transportation.

Slug later reads the mind of Bulma and learns about the Dragon Balls. He steals the Dragon Radar from her and gives it to his henchmen before sending them to go collect the Dragon Balls. After receiving the balls, he uses them to restore his youth and health.

Lord Slug then appears and fights Goku before using his powers as a Super Namek to grow giant. Gohan then starts whistling which, because the wavelength causes it sound terrible to Namekians, brings Lord Slug down, allowing Goku to punch a hole through him and finish him off with a Spirit Bomb. 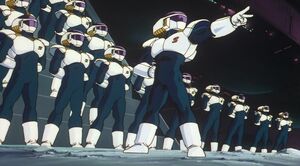