Lord Loren Soth of Dargaard Keep, the Knight of the Black Rose, is a fictional character in the fantasy realms of Dragonlance, and later Ravenloft. He is a death knight and a fallen Knight of Solamnia, from the world of Krynn.

According to Tracy Hickman, he needed a powerful character for the Heroes of the Lance to fight at the High Clerist's Tower, and Lord Soth suddenly came into his mind with a complete history and personality. The popularity of Lord Soth as a character has defined what a death knight means to the writers of the Dungeons & Dragons game over the years. Soth was also named as one of the greatest villains in D&D history in the final print issue of Dragon.

Soth stands at an imposing 6 foot 5 and wears a full suit of ancient Solamnic plate mail. The armour, which once protected Soth's human form, became the encasing that bound his essence in death. In life, the armour was shining white, with intricate carvings of kingfishers and roses, but in death, it was charred black, leaving only a single black rose on his breastplate, which would become his symbol. He wears a long purple cloak draped behind him almost to his knees. A tassel of long black hair tops his helm, from which only two flaming red dots of malice betray the creature's true essence. His voice seems an echo from a bottomless cavern, and like all death knights Soth commands an aura of freezing unearthly cold and terror, so powerful that even those normally incapable of feeling fear tremble before him. He travels mounted on a demonic steed with ebony skin and flaming hooves.

In life, Soth was just and good, albeit vainglorious and proud. In death, he is bitter and filled with an intense hatred for all living creatures, envying them for the life he once possessed. Despite this, Soth maintains vestiges of his former self. Despite possessing the power to kill almost any living thing with a single word, not to mention the use of a variety of powerful magics, Soth prefers to face his enemies head on with the sword he used in life. He fights honorably, never ambushing an opponent from behind or striking at them before they can ready their weapons.

Before Soth became a death knight, he was a Knight of Solamnia. Soth rose through the ranks of the knighthood, reaching the highest rank; Knight of the Rose. Soth inherited Dargaard Keep, a castle in the area of Knightlund, where he resided with his wife Korinne. While travelling to Palanthas to attend an annual meeting of the knights, Soth and his comrades came upon a party of Silvanesti elves being attacked by a band of ogres. The knights slew the ogres and rescued the elves. Soth was immediately smitten with the beauty of one of them, an innocent priestess-to-be named Isolde.

Soth took her with him to Dargaard Keep under the pretext of allowing her injuries to heal, and soon entered into an affair with her. Soth's wife soon died in mysterious circumstances, and Soth married Isolde, who one year later gave birth to a son, Peradur. A month after the birth of his son, Soth was summoned to Palanthas, where he was put on trial and sentenced for the murder of his wife. Soth was rescued from public beheading by a group of his loyal knights, who took him back to Dargaard Keep. Unwilling to besiege the keep, the knights banished Soth, who was forced to remain in Knightlund for fear of the retribution he would face at the hands of the knights.

Soth fell into a deep depression, and Isolde prayed to the gods for a way to save her husband. The goddess Mishakal charged Isolde with warning Soth of the coming cataclysm, and set Soth on a quest to Istar to stop the Kingpriest from calling down the wrath of the gods in his folly. Soth agreed to undertake the quest, and began his journey with a contingent of loyal knights. On the road however, Soth encountered the same elves who had been traveling with Isolde when they first met. The maidens who had been Isolde's companions told Soth that she had been unfaithful to him, that the child was not his, and that he had been sent on a fool's quest while Isolde lingered at the keep with her lover. In a fit of rage, Soth killed the elves and rode back to Dargaard with murder in his heart. Soth confronted his wife with their son in her arms, and during the heated argument, the cataclysm that Soth might have averted struck Krynn. A chandelier fell from the ceiling, crushing Isolde and trapping their son. With her life fading, she begged him to save their son, but the proud Soth refused. With her dying breath, Isolde called down a terrible curse on Soth.

As the sullied knight burned in the flames of the cataclysm, the gods heeded Isolde's final words. Soth awoke as a death knight, an incorporeal creature trapped in the armour that had once been his protection, now burnt to a black crisp. Soth's knights who had served him loyally even during his acts of evil rose again as skeletal warriors, bound forever in service to the master they had served without question in life. The elf maidens who had led Soth astray with their lies rose again as banshees, condemned to sing to Soth of his horrible crimes every night for all eternity.

War of the Lance

Soth spent hundreds of years in silent suffering in his castle, until the dark goddess Queen Takhisis approached him. Takhisis was waging war on Krynn in preparation for her return to the world, and saw the great boon a creature as powerful as Soth would be to her. Soth initially refused Takhisis' requests, but eventually agreed that he would serve the Dragon Highlord that dared spend a night in his keep. Takhisis sent out the call to her Highlords, but the only one bold and desperate enough to answer was the Blue Highlord Kitiara Uth Matar. Passing Soth's tests, she earned his unquestionable allegiance, and the use of his keep and armies.

After the city of Kalaman fell to the Whitestone Forces, Soth assisted Kitiara Uth Matar in a plot to kidnap the Golden General Laurana. Soth had grown obsessed with Laurana, an elf maiden who reminded him of his departed Isolde, and in return for his part in the plot, Soth was promised her soul. However, Kitiara went back on her word, and Laurana was rescued by her lover Tanis Half-Elven, after Kitiara agreed to let Tanis leave in peace. Soth remained loyal however, assisting Kitiara in murdering the other Highlords following Ariakas' death, making her the supreme leader of the Dragonarmies.

After the defeats she faced during the War of the Lance, Kitiara spent a period licking her wounds until Soth convinced her to invade Palanthas. Unbeknownst to Kitiara, Soth, like so many others, had fallen in love with her, and hoped that the invasion would be her doom, planning to take her soul after she died to force her to spend eternity with him. She dispatched him on a mission to kill the priestess Crysania in order to thwart Raistlin Majere's plans to enter the Abyss and become a god.

When Kitiara and her forces invaded Palanthas, Soth led the vanguard, breaking the city's great gates and slaughtering everything in his path, finally claiming his vengeance on the city that had played a pivotal role in his downfall. Soth reached the Tower of High Sorcery of Palanthas, where Kitiara lay dying of a wound inflicted by her former lover, Dalamar the Dark. Soth entered the tower to claim her soul, but was initially unable to as she was protected by Tanis Half-Elven's love for her. Soth and Dalamar convinced Tanis to let his feelings for her go, and Soth carried away the body of the only creature he considered his equal.

After the Chaos War, Takhisis secretly stole the world away, moving it to another place in the universe and cloaking it from the eyes of her fellow gods. Soth found himself truly alone for the first time in both life and death, now separated from his skeletal warriors and banshees and trapped in Dargaard Keep. Soth was approached by Mina, an agent of the "One God" (secretly Takhisis) with an offer. In the name of her god, Mina had amassed a vast army of both the living and the dead. She was to command the living, and offered Soth captainacy of the dead. Recognising the true hand that guided Mina, Soth refused the offer, having finally had time to reflect on his deeds and putting aside his pride to accept responsibility for what he had done. Enraged by his refusal, Takhisis hoped to scare Soth into obedience. She restored his humanity, and set Dargaard Keep aflame, threatening to kill him. However, in her anger and arrogance, Takhisis unwittingly gave Soth the one thing he truly desired, by giving him human form and allowing him to die. Soth relished in the pain of death, vowing with his dying breath that he would find his wife and son and make up for what he had done to them.

Although evil and filled with an intense hatred for all living creatures, most of the time Soth retains a semblance of the pride he held as a Solamnic knight, and fights honorably. He will never ambush an opponent from behind, nor does he strike before his enemy can ready his weapon. Aside from these facts, however, Soth is a terrible enemy. An undead abomination, Soth has inhuman strength, which is further enhanced by his skill with the sword; something that he learned as a former Knight of the Rose. Soth also can cast various type of spells, including huge fireballs, magical words which stun or kill enemies, ice walls, cone of cold, etc. With a single word, Soth can snuff the life out of a red dragon (thus Power Word: Kill), or shatter the great city gate of Palanthas, which was formerly known as the "Unconquered City."

Knight of the Black Rose 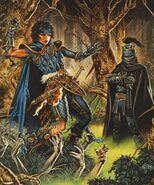 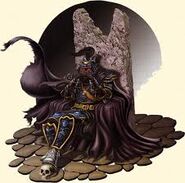 Soth as depicted in the D&D 5th edition Monster Manual