Right-Hand and enforcer to Emperor Palpatine.

Powerful command over the Dark Side of the Force

Hunting down enemies of the Empire.

Hunt down and destroy enemies of the Emperor.
Locate R2-D2 and C-3PO.
Kill Obi-Wan Kenobi.
Rout the rebels on Hoth.
Turn Luke to the Dark Side (all succeeded).
Overthrow the Emperor.

Lord Starkiller is an antagonist in an alternate Star Wars timeline in which Darth Vader is defeated and killed by his former apprentice Galen Marek, code named Starkiller. His existence is considered non-canon, and he does not conflict with existing Star Wars lore, even within Legends continuity.

This evil incarnation of Starkiller is first introduced canonically in the Jedi Temple DLC for Star Wars: The Force Unleashed, in which Galen Marek travels to the ruins of the Jedi Temple on Coruscant at the command of Jedi Master Rahm Kota. As a final part of his trial, Galen is confronted by a mysterious Sith Warrior clad in a sinister armor. After a heated duel with the Sith, Galen manages to dislodge his helmet, revealing his own face. Shocked at seeing his own disfigured face, Galen backs off. Galen is told that he cannot escape this fate. Confused by the message, Galen departs from the Jedi Temple.

Following his defeat of Darth Vader, Galen is tempted by Darth Sidious to kill Vader and replace him as Sidious' new Sith apprentice. In a vain attempt to prevent the Emperor from turning Galen to the Dark Side, Master Kota rips Sidious' light saber from his sleeve and attacks him, only to be easily overpowered by the Emperor's superior Force abilities. Confronted with the choice of revenge or redemption, Galen leaps to Vader and resumes his furious assault. Although the Dark Lord fights for his life, he is ultimately defeated and killed by Galen. Returning to Sidious, Galen is given one final test to prove his devotion to the Dark Side: kill Master Kota and sever his ties to the Jedi.

Igniting his light saber, Galen quickly turn to strike at Sidious, who was prepared for his betrayal. Easily blocking the attack and hurling Galen across the room, the Emperor gripped The Rogue Shadow and brought it down on Galen, mortally wounding and disfiguring him. Waking up on a surgical table, he found that he was encased in the sinister armor that the Sith Warrior at the Jedi Temple was wearing. The Emperor informed him of his failure, and how he could have been the successor to the Imperial throne. However, the Emperor had no plans to kill Galen yet. He told Galen that he would be kept alive only until a new apprentice was found. In the meantime, Galen would do the Emperor's bidding and assassinate his enemies.

In this DLC for Star Wars: The Force Unleashed, Lord Starkiller is now a fully realized Sith apprentice to Darth Sidious. At some point, after reconstructing Galen Marek's body, the Emperor apparently decided that no suitable apprentice was to be found, and Galen was officially declared Sidious' new apprentice. Dubbing him Lord Starkiller, the Emperor sent his apprentice on a number of missions. One of his most important missions was to travel to Tatooine in search of the stolen Death Star plans contained within an astromech droid. His search takes him to the palace of Jabba the Hutt, whose spies were the only reliable source of intel on the remote planet. Using is powers to enter the palace, Starkiller was attacked by a number of Gamorrean Guards. Easily slaying them, he apparently impressed Jabba, who admitted Starkiller into his throne room. Stating his desire to find the droids and promising Imperial compensation for any information, he realized that Jabba was attempting to deceive him.

Before Starkiller could strike, however, Jabba activated the trap door that dropped him into the Rancor Pit. Having killed dozens of rancors during his apprenticeship under Darth Vader, Starkiller effortlessly butchered the rancor and fought his way through Jabba's forces to find the missing droids. While escaping Jabba's palace, Starkiller encountered his maimed training droid PROXY within the palace incinerator room. Using the droid's holographic capabilities to his advantage, Starkiller continued through the palace to the hangar. The famous bounty hunter, Boba Fett, confronted him in the hangar, informing him that he was collecting the bounty Jabba had just placed on Starkiller's head. Fett proved to be a formidable opponent, having fought both Jedi and Sith over the course of his career. However, his skills were not enough to save him from Starkiller's wrath, and the bounty hunter was killed.

Tracking the droids to Mos Eisley, Starkiller made his way to the hangar where the Millennium Falcon was preparing to take off, with his targets onboard. Before he could intercept the ship, he was confronted by the elderly but still phenomenally powerful Jedi Master, Obi-Wan Kenobi. Relishing his opportunity to finally destroy the former master of Vader, Starkiller ferociously dueled Obi-Wan. Obi-Wan was one of the most powerful and dangerous opponents Starkiller had ever faced, but still Starkiller defeated the old Jedi Master. Again attempting to stop the Millenium Falcon from leaving, he was stopped by Obi-Wan's Force Ghost. Utilizing his vast arsenal of Force abilities, he vanquished the spirit with enough time to plant an Imperial tracking device on the Falcon's hull.

About three years following the events on Tatooine, Starkiller led the 501st Legion against the Rebel forces on Hoth. The Emperor had a great interest in not only seeing the Rebellion wiped out, but he also wanted to turn the young Rebel Commander and son of Vader, Luke Skywalker, to the Dark Side. Starkiller, however, had other plans for the young Jedi. Fighting his way through Wampa caves and the Rebel's Echo Base, Starkiller was confronted by Skywalker. Before their duel, Luke stated that he believed that Vader had betrayed and murdered his father, Anakin Skywalker, to which Starkiller menacingly replied, "So you have been told..." Skywalker had been aided by the spirit of Obi-Wan and had become a powerful Jedi Knight since leaving Tatooine.

As such, he possessed great Force strength and skill with a lightsaber. Releasing a group of Wampas to attack Starkiller, Luke escaped to the hangar where he would help the Millenium Falcon escape. Followed closely by Starkiller, the two again met and dueled in the hangar, with Luke fighting to kill the Sith Lord. Pinned beneath Starkiller with his lightsaber at Luke's throat, he was forced to hear the truth: that Vader was his father...and that Starkiller was the one who murdered him. Enraged by this, Luke hurled Starkiller across the hangar and unleashed the Dark Side on him. However, Starkiller was a master of the Dark Side, and was not about to be overpowered by this newly fallen Jedi.

Severing Luke's right hand and using the Force to hold the Millenium Falcon in place, Starkiller taunted Luke by telling him that only his hatred would allow him to save his friends from death. Blasting Starkiller back with the Dark Side, Luke was brought to his knees before the Dark Lord. Starkiller laughed low in his throat and stood before the fallen Jedi, taking him as his new apprentice. The remainder of Lord Starkiller's story has yet to be told. 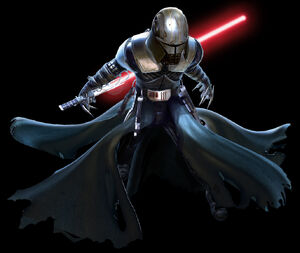 Lord Starkiller in the Dark Lord variant of his armor 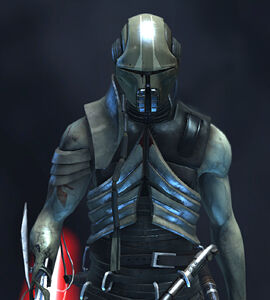 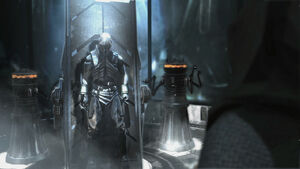 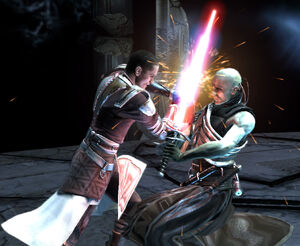 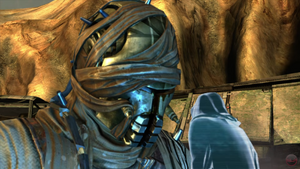 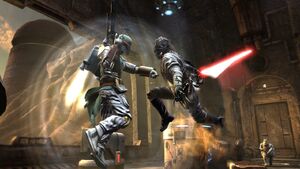 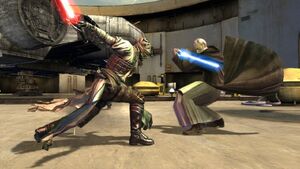 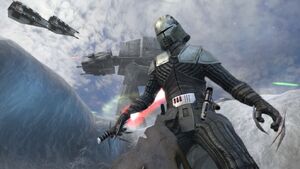 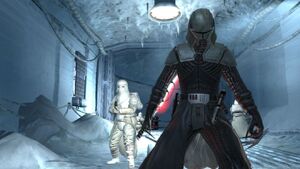 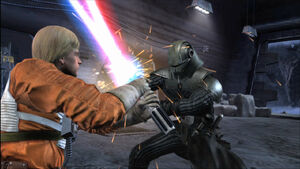