Landholder and ruler of the island

Sacrifice Neil Howie for the enrichment of their crops (succeeded)

Lord Summerisle is the landholder and ruler of the island of Summerisle (named so after his grandfather, who set the basis for the island's current society), and the main antagonist of the 1973 Robin Hardy's supernatural/psychological horror film The Wicker Man.

He was portrayed by the late Sir Christopher Lee, who also played Frankenstein's Monster in The Curse of Frankenstein, Count Dracula in Hammer Films' Dracula films, Francisco Scaramanga in The Man with the Golden Gun, King Haggard in The Last Unicorn, Cushing Catheter in Gremlins 2: The New Batch, Saruman in Sir Peter Jackson's The Lord of the Rings and The Hobbit film trilogies and Count Dooku in the Star Wars prequel films.

The island of Summerisle is primarily known on the outside for its exportation of apples. It is inhabited by a community of carefree and affable pagans, whose culture seems to revolve mainly around sex, as it is taught in schools and imbues local folklore songs.

When Sgt. Neil Howie, a devout Christian, arrives from the mainland in search of a missing girl - thanks to a letter sent by Summerisle -, he is outraged by the villagers' customs. He heads towards the Lord's domain for explanations, where the latter tells him that God had his chance and "blew it", and that Christianity is seen merely as a comparative religion down there.

Much of the island's pagan traditions, beliefs and practices date from several centuries ago, some of its deities being the god of the sun, the god of the seas and the goddess of the orchards, the idea of reincarnation firmly rooted among the population and a few rituals that even include human sacrifice still in practice, which Lord Summerisle openly accepts and encourages.

Howie later discovers that a negative of last year's harvest photograph does in fact exist. It shows Rowan standing amidst a group of boxes, indicating that last year's harvest was a poor one and that the crops—the island's only means of income—had failed. Struck by his research that indicates pagan societies offer a human sacrifice in the event of crop failure, Howie deduces that Rowan is in fact still alive and that she will be sacrificed as part of the May Day celebrations to ensure a plentiful harvest for the coming year.

Howie stays at the inn for another night. The next morning, discovering that his plane has been sabotaged, Howie elects to search the island for Rowan himself. He ties up the innkeeper and assumes his place as Punch, a principal character of the May Day festival. Disguised, he joins the procession of islanders as they cavort through the town and perform harmless sacrifices to various gods. Rowan is finally revealed, tied to a post. Howie cuts her free and flees but after a brief chase, emerges at another entrance where Summerisle and his followers stand waiting for them. Howie is shocked to see Rowan merrily embrace her captors and then notices that he is being surrounded.

Lord Summerisle explains to Howie that he was lured to Summerisle by the islanders, who have been successful in a conspiracy to lead him to believe that a missing girl was being held captive, and confirms to him that last year's harvest failed disastrously. Their religion calls for a sacrifice to be made to the sun god. The facts that Howie is still a virgin, came of his own free will, and has "the power of a king - representing the law", and is a fool, means that he meets the outstanding criteria for an adult that is to be sacrificed to appease the gods and provide a successful harvest.

Howie warns Lord Summerisle that if and when the harvest fails again, then the islanders will turn on him and use him as their next sacrifice. Summerisle angrily insists that the sacrifice will work, and that in doing so the next harvest will be bountiful. In spite of his protests that the crops failed because fruit was not meant to grow on these islands, Howie is stripped bare, dressed in ceremonial robes and led to the summit of a cliff with his hands tied. He is horrified to find a giant, hollow wicker man statue inside which he is then imprisoned with animals in other compartments. The statue is soon set afire. As the islanders surround the burning wicker man and sing the Middle English folk-song "Sumer Is Icumen In", an anguished Howie proclaims that God has deprived them of their harvest for their paganism and deceit, and as the fires build around him, recites Psalm 23 as he prays to God for ascension to Heaven. He then screams out the name of Jesus Christ as he perishes. The film ends as the burning head of the wicker man falls from its shoulders, revealing the setting sun in the distance. 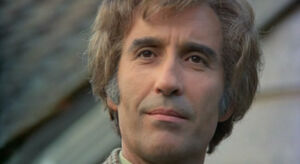