Egyptian God of chaos and darkness

Killing anyone who stole or misused his magic of immortality without his blessing, being forever worshipped.

Destroy André Toulon, his Puppets and anyone who stole his magic of eternal life

Lord Sutekh is the unholy ancient Egyptian god which is the primary villain of the Puppet Masters series for begin the original owner of the ancient secret magic of eternal life that has been stolen for centuries by Afzel.

In Retro Puppet Master when a wizard called Afzel stole his secret of life, Sutekh revives his 3 Mummy Servants to hunt down the sorcerer and all those who are in possession of the his secret. When his undead slaves is killed by André Toulon, Sutekh resurrect them again (except the third mummy for being useless) and gave the power to the two mummies.

In Puppet Master 4, Sutekh in his demonic kingdom the Underworld know that others will know his secret. Because of this, he orders his watchers to send the Totems to eliminate all those who have knowledge of his magic. He orders his delivery man to deliver a Totem on Biotech when kill Dr. Leslie Piper & Dr. Carl Baker. Sutekh discovers others who are aware of his magic, this person is Rick Myers and his friends where they have possessions of Toulon puppets and orders his delivery man to deliver a Egyptian Ouija Board to be caught in a trap. His objective was frustrated when Toulon (inside the Decapitron) and his puppets annihilate the 3 totems for complete.

In Puppet Master 5, Sutekh take more drastic measures using his avatar called Dark Totem to kill who has the knowledge of his magic. He kill the Dr. Jennings' hired helpers for his own hands. He begins the final battle against André Toulon, Sutekh tries to escape to his kingdom until he is stopped by Toulon. 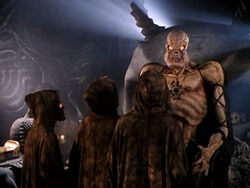 The malevolent worshipers of Sutekh with their god. 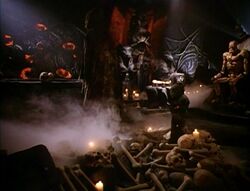 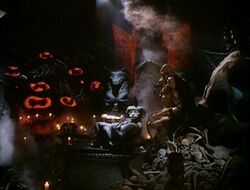 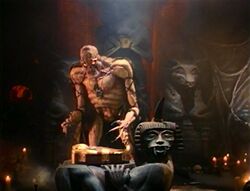