Obtain the Great Sword of Destiny (succeeded for a while) to avenge all the people who had died in the world in order to live forever (failed).

Lord Takagami is the main antagonist of Dick Figures: The Movie. He is a murderous, insane and megalomaniacal ancient Japanese warlord who is inadvertently awoken by stick figures Red and Blue from his ten thousand-year slumber as a statue along with his army, resuming his quest to kill his failed and disowned son, Papa-san (the Raccoon) and once again obtain the mystical Great Sword of Destiny to avenge all people who have ever died in the world.

He was voiced by Eric Bauza, who also voiced Lord Stingray from Superjail!, Arcade, Scorpion, and Swarm in Ultimate Spiderman, Tiger Claw in TMNT, The Beagle Boys in the 2017 Ducktales Reboot, Dr. Psychobos in the Omniverse, Marvin the Martian in the 2020 Looney Tunes series, and many more.

After creating his army in ancient Japan, he started a war, killing everyone in his way, until his unknowing son's village was all that was left to destroy. Lord Takagami could not forgive his son because his wife was a geisha and even though they love each other, a Takagami could never marry a geisha. Using his powers, he turns into Ocho Muerte and eats The Raccoon's wife.

Unfortunately for him, The Raccoon manages to defeat the Takagami Demon Army and kill his father thanks to the power of the Great Sword of Destiny and his utter anger. However, Lord Takagami shattered the blade and before dying, he put a curse in the sword, which sets Raccoon's village and possibly all of Japan up in flames (however, Raccoon believes that this was the fault of the sword's power being "too strong" for him).

For the rest of his life, him and his army sworn to guard the Great Sword of Destiny from anyone who wishes to use it. After cursing the sword, his body and his army remained as statues inside a temple on the top of a mountain in Japan, guarding the hilt of the sword, for thousands of years.

When Red and Blue arrive inside the temple to grab the hilt, Lord Takagami and his ninja companions come back to life to kill both trespassers. He also chooses to kill Pink, since she will be the one to receive the sword as a gift. However, Red and Blue manage to get outside the temple and escape his army, fleeing on a rowboat into the sea. Takagami looks at them going away, and he turns away.

Once Red and Blue eventually reach Paris to try and find the blade of the sword, Lord Takagami is informed by Mr. Dingleberry where they're going and then immediately kills the old man. Red and Blue still manage to get the blade, but when Blue attempts to get the gem for the sword by himself after being abandoned by Red, he's captured by Takagami and his demon army. Eventually Red and Raccoon save Blue, and during a sword fight between the Raccoon and Takagami it is revealed that he actually is Raccoon's father who originally owned the sword. Raccoon, in disbelief, becomes furious, and, after briefly resuming the sword fight, defeats him by cutting off both of his hands. Raccoon then asks his father why he's doing all of this, to which he replies that wants to avenge everyone in the world who has ever died, including those he murdered. When Raccoon points out that his plan makes no sense at all, he says he only wants to avenge them so he could then live forever. Raccoon once again realizes he is truly evil, then bids goodbye to his father and decapitates him. Takagami's body falls into the volcano.

However, instead of dying, Takagami is resurrected as the demonic octopus monster Ocho Muerte, which attacks Red and Blue's home town (surely once again killing thousands of people) and goes after Pink to kill her. Takagami manages to eat Raccoon, but after Red drops the Sword of Destiny into Takagami's mouth, he explodes and sets free not only The Raccoon, but also his long-lost wife. 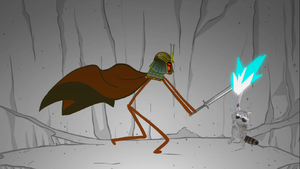 Takagami fighting with the Raccoon. 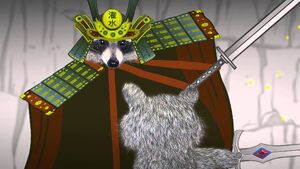 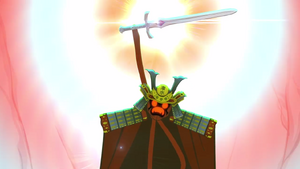 Lord Takagami and the Sord of Destiny in his power. 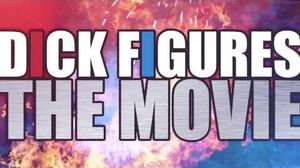 Dick Figures The Movie - Chapter 1 of 12 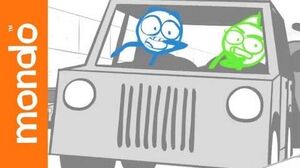