Able to travel between dimensions

To dominate the LEGO multiverse by using the Foudational Elements at Foundation Prime, the center of the multiverse so he can rule it all.

He was voiced by Gary Oldman, who also played Sirius Black in the Harry Potter series, Baron Ruber in Quest for Camelot, Commissioner Gordon in the Dark Knight trilogy, Ignitus from The Legend of Spyro and Lord Shen in Kung Fu Panda 2.

As the main antagonist of LEGO Dimensions, Lord Vortech is the opposition of Batman, Gandalf, and Wyldstyle.

He plans to dominate the LEGO multiverse by using the Foundation Elements at Foundation Prime, the center of the multiverse. Using vortexes to open rifts between worlds, he is capturing characters such as Robin, Frodo, and Metalbeard to take the Foundation Elements that they own (Kryptonite, the One Ring and Metalbeard's treasure chest). With his ancient powers, he is opening rifts to collect an army of bad guys to help him achieve his ultimate goal - To rule the entire multiverse and everyone who inhabits it.

When the villains failed in their plots to stop Batman, Wyldstyle, and Gandalf from defeating them and gained new allies such as The Doctor, X-PO, and many others, Vortech took matters into his own hands by facing them in 1885 Hill Valley, later mysteriously retreating back to his lair at Foundation Prime. He confronted them again later, disguising himself as a mummy and attempting to steal a Diamond Scarab from the "Scooby-Doo" world. When the three heroes retrieved it from him, he was able to track them down, summoning the three to Foundation Prime and putting them in a maze while simultaneously sending The Joker to ransack their headquarters in Vorton. Vortech put the heroes at his mercy as he used the Foundation Elements to create a "perfect world" and merge Metalbeard, Robin, and Frodo together to create "The Tri", a triple-headed entity based mainly off of Metalbeard, but also adding elements of Robin and Frodo's costumes that could merge the worlds together. After the defeat of the Tri, the heroes attempted to escape the exploding robotic Tri-suit by way of a fragment of Vortech creating a singularity.

Assembling an army of their allies (and GLaDOS) to take on Lord Vortech, the three heroes set up a plan with the Doctor to trap Vortech in a Rift Loop, similar to a situation they had been put in before, but a now-omnipotent Vortech anticipated this, encountering them in their trip through their portal. Despite his nearly godlike status, Vortech was unable to stop the heroes from reaching Foundation Prime once more with a little help from the Doctor and his TARDIS. There, Vortech had a final showdown with the trio, eventually being defeated by being sucked into one of his own portals, ending his threat. As ensurance that his meddling would finish, the heroes trapped Vortech in an alternate reality in a "perfect" prison, thus removing him from their reality forever.

However, a small brick fragment of him remained on his lair at Foundation Prime, and an unlikely man (possibly Bob) stumbled across it. The Vortech fragment merged with the stranger, turning him into an entity similar to Vortech himself, complete with the voice and evil laugh. 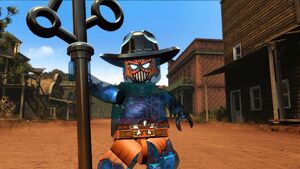 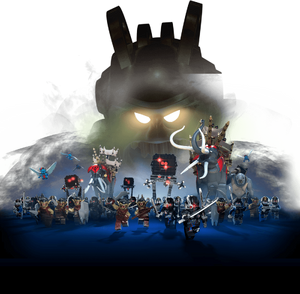 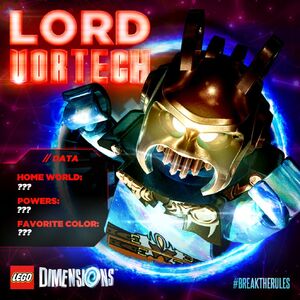 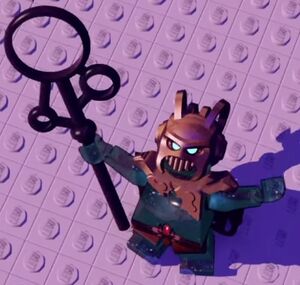 one of Lord Vortech's old designs as seen in the trailer. 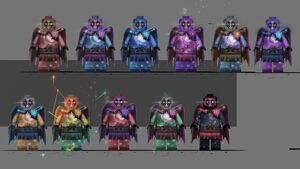 Concept art
Add a photo to this gallery
Retrieved from "https://villains.fandom.com/wiki/Lord_Vortech?oldid=2154288"
Community content is available under CC-BY-SA unless otherwise noted.