Torturing and raping his victims.

Satanic Warlock
Lord William de Soulis has become demonized in English folklore as a madman and devil-worshipper, though whether this was factual or not is heavily debated. Regardless of truth, de Soulis is the centre of countless legends surrounding his cruelty and depravity.

According to local belief, this evil nobleman was fond of the Dark Arts and subjected his people to intense cruelty with the aid of his demonic minion, Robin Redcap. In fact, de Soulis became so evil that the locals had no choice but to revolt against him and boil him alive to end his reign of terror.

Historians have dismissed this part of the legend as de Soulis was in reality arrested at the time for treason against Robert the Bruce and died in his prison cell. Of course, legend often overrules reality and many people still prefer to believe the old tales about de Soulis and his evil ways. While William de Soules is demonized in legend the likely source of the "evil warlock boiled alive by servants" came from Sir Ranulf (Randolph) de Soules of Liddel (born c.1150 and murdered by his servants in 1207/8).

The legends of William de Soulis are wide and many but there is considerable debate on which of the Lords the legend refered to, while many point to the aforementioned Soulis (who was imprisoned for treason) as the likely culprit others note the inspiration may of came from another Lord who was, indeed, killed by a peasant uprising. The most common version of de Soulis is said to have lived roughly in the era of 1280 to about 1320.

In all legends concerning the mad Soulis he is said to be a demonic warlock capable of summoning demons and lesser servants - the most prominent being Robin Redcap, he is said to have engaged in so many acts of depravity that the castle itself began to sink into the Earth to "hide its sins from God".

He was also said to have been granted immunity from conventional or minor mystic harm as neither magic rope could bind him nor steel harm him - thus he was wrapped in lead as part of his execution.

Despite all of his powers and authority, Soulis was ultimately powerless against a peasant revolt and was apparently boiled alive inside a giant cauldron - yet his evil legacy continues to this day as Robin Redcap is said to continue to haunt the surrounding area, continuing his long-dead master's malice long after Soulis reign was broken.

Lord Soulis ghost is also supposed to return every seventh year to the vaults in which he sacrificed his victims. His terrifying spectre and the frightful screams of his innocent victims have been heard on more than one occasion. 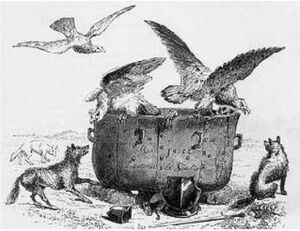 A depiction of the cauldron used to finally slay the mad warlock, Soulis. 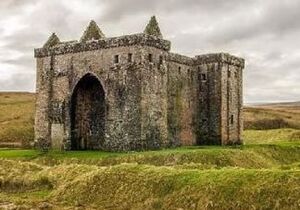 The infamous castle Soulis was said to inhabit.